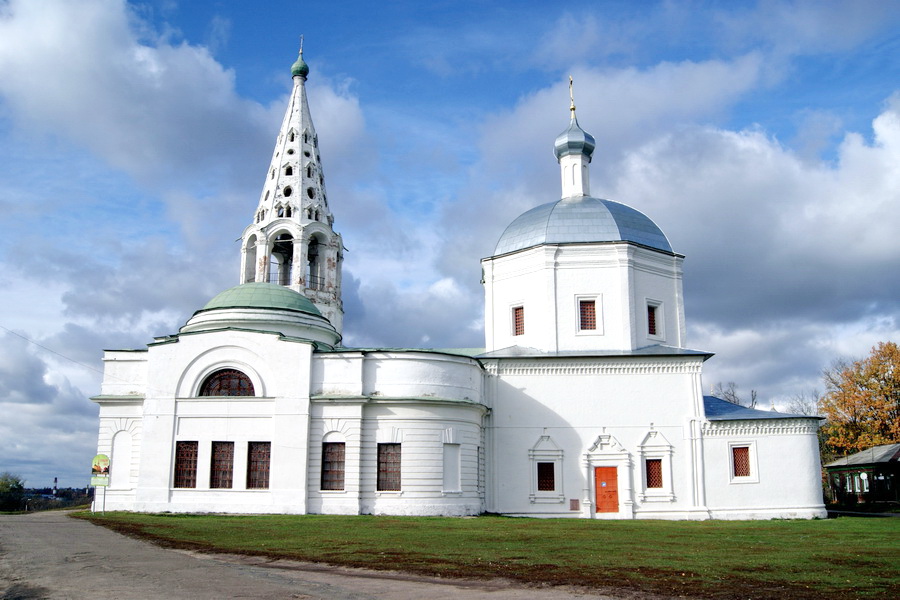 Tours, Attractions and Things To Do in Serpukhov

Serpukhov, Russia is famous for being the oldest city in Moscow Region and a former fortification of Moscow Principality. The city's name was inspired by its location along the picturesque Serpeyka River, a branch of the Nara and Oka Rivers.

A quiet town, it is one of the favored destinations near Moscow for escaping the din of the capital. Visitors love to admire its historical architecture, take boat rides on its labyrinth of rivers and walk its hilly landscapes dotted with quaint buildings. Nearby is Prioksko-Terraced Nature Reserve, the only park in Moscow Region where you can see glacial lakes, walk in a relict pine forest and visit a bison nursery.

Serpukhov is divided by the river into two parts. The main tourist attractions - old industrial buildings, churches and monasteries which bring you face-to-face with history - are located on the left riverbank in the central district. The city also has new neighborhoods where modern residential quarters are constantly being expanded. Most popular among these suburbs is Ivanovo Courtyards, known for its monolithic buildings and well-developed infrastructure.

The first mention of Serpukhov appeared in 1339. At that time the city had been inherited by one of Grand Duke Ivan Kalita's sons, Andrei Ivanovich, and was the center of the region. The city was further glorified by Prince Vladimir the Bold, the hero in the fight against the Mongol Golden Horde at the Battle of Kulikovo. The prince went on to build a wooden kremlin and the churches of Vysotsky Monastery. During his reign the city took on a significant role in the political, economic and military spheres and was appointed the center of Serpukhov Principality.

In the following centuries the city's strategic location inevitably plunged it into the turmoil of historical events. After Serpukhov survived several attacks by the Crimean Tatars, the decision was made to build a white-stone kremlin with combat towers, a moat and underground secret passages. The kremlin proved reliable in protecting Serpukhov from further attack.

Since 1572 Serpukhov has served as a deployment site for the Russian army. Under Peter I, Serpukhov became one of the main industrial cities of Moscow Region, and in 1812 many of its brave warriors helped to defend the country against Napoleon and his army.

In the 19th century the townspeople were mainly engaged in trade, as evidenced by the commercial buildings from this era which are one of the main attractions of Serpukhov today. In 1883 a coat of arms bearing the image of a peacock was approved for the city. Many peacocks were born in Vysotsky Monastery in Serpukhov, and thus this ancient symbol of immortality, glory and victory over the enemy also became the symbol of Serpukhov.

Most tours in Serpukhov begin at the kremlin, a monument to Russian fortress architecture and a highlight of the city. The white-stone Serpukhov Kremlin, which was built in 1556 on the site of the original wooden kremlin from 1374, proved effective in protecting the city from attack. A wooden stronghold measuring nearly 1000 meters long was also built inside the kremlin on Cathedral Hill. The original fortress walls included eight towers, although none have survived to our day. Today, only Trinity Cathedral and a small section of the original wall testify to the former greatness of Serpukhov Kremlin.

Hidden in a picturesque wooded area is the majestic Vysotsky Monastery. Its history is connected with the venerated St. Sergius of Radonezh and Prince Vladimir the Brave, who baptized his firstborn here. From the day it opened until now, the monastery has been a popular destination for Orthodox pilgrims. The ensemble consists of Church of the Intercession of the Most Holy Theotokos, Church of Saints Basil the Great, Gregory the Theologian and John Chrysostom and Church in the Name of All Saints. Construction of a chapel in honor of the Inexhaustible Chalice Icon is also underway.

Opposite Vysotsky Monastery, on the opposite bank of the Nara, is Vladychny Vvedensky Convent. Founded in 1360, the site includes Introduction of the Most Holy Theotokos Cathedral and three churches. In the mid-20th century the convent was used as an aviation town and later as a military school. Monastic life was revived here only in 1995. Vladychny Convent is best known for the myrrh which reportedly began flowing from many of the icons in the year 2000. Among them is the famous Inexhaustible Cup Icon, which is said to cure drunkenness.

Artists will want to visit Serpukhov History and Art Museum, home to more than 40 thousand unique exhibits which are counted among the richest in Moscow Region. This unforgettable museum is located in Marayev Mansion, once home to a dynasty of merchants. The Marayev family collection is now the museum's most unique exposition. Other popular exhibits include works by famous Russian artists Aivazovsky, Levitan, Shishkin and Savrasov. Visitors can get acquainted with 16th-19th century Western European paintings, unique collections of porcelain, various weapons and more. The museum ensemble includes Intercession Old Believers' Church and the N.P. Andreev Memorial House, dedicated to the famous photographer of the early 20th century. Guests can even take a workshop on how to paint nesting dolls and participate in a reconstruction of an old Russian battle scene.

Peacock Museum is a small exposition but one of the most frequently visited museums in Serpukhov, which true to its name contains a variety of displays on this regal bird.

Museum of Printing was created with donations from citizens to preserve the pre-revolutionary building of the editorial and printing office for Serpukhovskie Vesti Newspaper. Apart from viewing some fascinating exhibits, guests can print a small leaflet on the 19th-century machine and practice writing with a goose quill.

In Serpukhov, many old industrial buildings which are still in operation today are very well preserved. Of particular interest are the shopping mall premises, the old building of Gostiny Dvor, Merchant Kishkin's Canvas Factory, Semashko Hospital and Konshin Factory. The eclectic pre-revolutionary railway station building is almost completely preserved in its original form.

Also in Serpukhov are many parks and green areas, a sports field and the picturesque Pavlenskoe Lake, the largest in Moscow Region. Rides on riverboats and motor ships along the lake remain a popular activity in Serpukhov.

Not far from Serpukhov are old manors which delight with their history and create beautiful photo backdrops. Pushchino-on-Nara Estate, located in the village of Pushchino, was built at the end of the 18th century. The 19th-century Turovo Estate is located in the village of the same name. Pushchino-on-the-Oka Estate, also from the 19th century, is sadly beyond a state of repair and may not be available for viewing much longer.

Popular sculptures in Serpukhov include a monument to playwright Anton Chekhov and Sculpture of the Lady with the Dog, dedicated to the work of the same name which Chekhov wrote while staying in his estate near Serpukhov.

The city is also known for its thirteen mini-sculptures dedicated to the main symbol of Serpukhov, the peacock.  Located in different parts of the city, each peacock represents a different type of city resident - theatergoers, athletes, artists, guards, readers, tourists, cooks, runners, station attendants, janitors, firefighters, teachers and doctors. The little peacocks have become popular quest objects in Serpukhov, Russia, with visitors trying to find all thirteen sculptures in one day.