Covered market Panjshanbe is one of the most colorful sights of Khujand. Its name sounds similar to the name of the capital city – Dushanbe for a reason. Both names mean days of the week: Dushanbe – Monday, Panjshanbe – Thursday. They used to have trade on Mondays in Dushanbe, and on Thursdays in Khujand.

Panjshanbe Market or, bazaar, is located in the center of Khujand, opposite Sheikh Muslihiddin mausoleum. The bazaar consists of the main pavilion and many stalls, tents and shops adjust to it. It is always noisy there since not only residents of the city but also neighboring villages flock there for shopping. 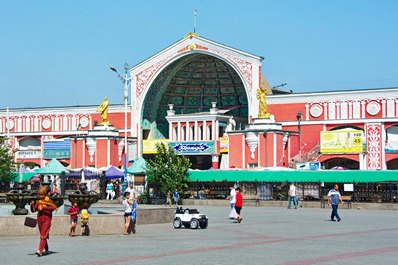 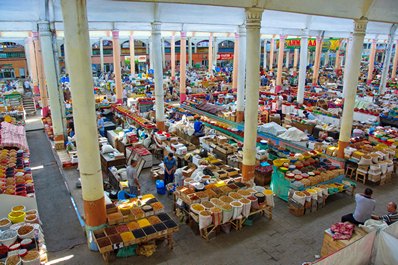 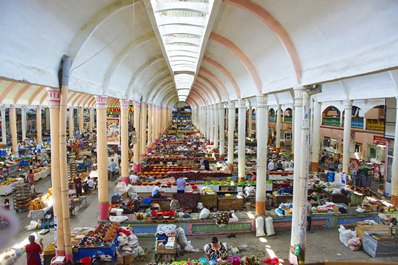 The main feature of the Panjshanbe market is its unique architecture and design. Construction of the pavilion took place in the middle of the 20th century and finished in 1964. The building of the bazaar combines elements of classicism and Stalin’s Empire. The interior combines Soviet and oriental styles. There is a semi-spherical portal above the central entrance adorned with a bright painting and sculptures of man and woman on the sides. When you enter, you will see a long arched hall with a row of columns. 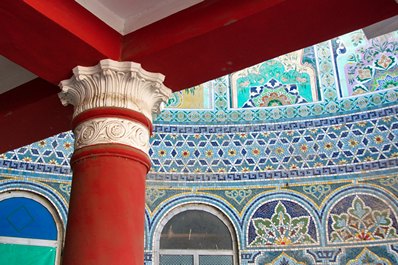 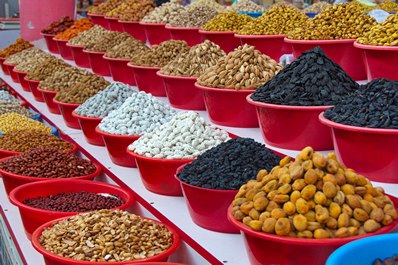 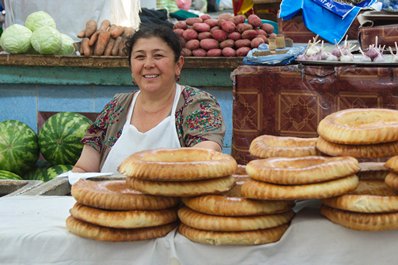 Panjshanbe market offers a big variety of goods that can be divided into two parts, grocery and non-food. On the ground floor, there is a huge hall where you will find fruits and vegetables, bread and spices typical for any bazaar in Central Asia. There you can feel the real color of the oriental market. The first floor places numerous shops and stalls selling clothing, electronic devices and household items. Shopping arcade is common for post-Soviet area.

If you are planning to visit Khujand, we definitely recommend you to take a walk to the Panjshanbe market to make your trip to this ancient city complete.