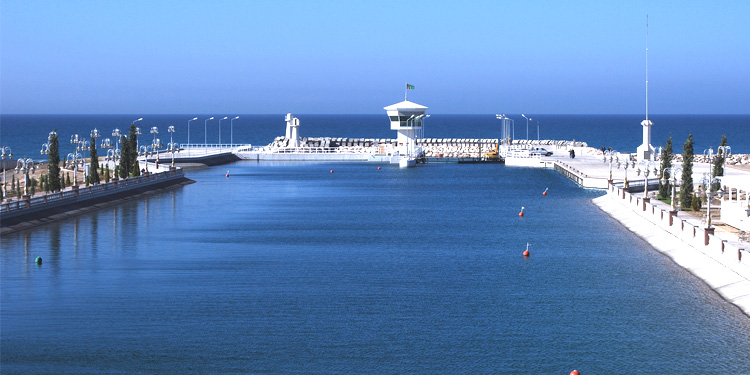 The Caspian Sea, the world’s largest lake, separates Europe and Asia, and is, at the same time, the Turkmen western border with a coastline of 1,200 km. The Caspian is called a sea due to its size and geologic structure, which once was an ocean bottom. The total area of the Caspian, located at the height of 27 m below sea level, is about 371,000 km2, while its maximum depth reaches 1,025 m, which also makes it one of the deepest lakes in the world. The Caspian water is salty.

The Turkmen part of the Caspian Sea shore is predominantly indented and composed of limestone. The only major city there, is Turkmenbashi (former Krasnovodsk). There are also several bays, the largest of which is the Kara-Bogaz-Gol, connected with the Caspian Sea by a narrow isthmus.

This bay is located in the north-western part of Turkmenistan. Its name is translated from the Turkmen language as a “lake of black strait”; however its other interpretation translates Kara-Bogaz as a “black throat”. Indeed, in centuries past, these places were considered deadly.

In fact, the Gulf of Kara-Bogaz-Gol is a separate lake, connected with the Caspian Sea only by a small isthmus with the width of less than 200 m. Moreover, it is located below the Caspian Sea, and each year millions of cubic meters of water flow down there, bringing 13-15 million tons of salt. Due to the high-level evaporation, the water surface of Kara-Bogaz-Gol constantly changes in total area and when dried, forms clusters of crystals of mirabilite (Glauber's salt) on its shores. Therefore, in contrast to its name, sometimes it is also called a “sea of white gold”. The place is famous for production of mirabilite, which is widely used in chemical and pharmaceutical industries.