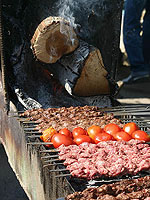 Cattle husbandry has resulted in the fact that meat dishes are the most important in the national cuisine. Turkmen prefer mutton to all other meats. Besides, they use a lot of chicken meat and do not eat horse meat and pork at all. Turkmen cook basically on mutton fat and sesame oil which they use not only at cooking meat dishes but also farinaceous and sweet ones.

Meat is cooked in a traditional way -small pieces of meat are fried in own grease. (Turkmen call it "govurma" - a dish similar to Kazakh and Uzbek "kavurdaku"). "Govurma" is used as a basis for subsequent preparation of various dishes. "Govurma" is considered one of delicious dishes eaten both cold and hot. "Govurma" is used for cooking soup called "gara chorba".

Turkmen also roast meat on hot coals (kebap - a shashlick). The national Turkmen shashlick (kebap) is named "keyikgzheren kebap" - a shashlick from a young mountain goat meat. There are also dishes from boiled and stewed meat.

Turkmen as well as Tajikistani often bake meat in tandyr. But Turkmen people have their own cooking ways which cannot be found anywhere else. The result from specific natural environmental conditions: high ambient air temperatures, dry hot winds and heated sands. For example Turkmen dry meat in the wind under the scorching sun. This kind of dish is called "kakmach". The Tekins (one of Turkmen nationalities) cook "garyn".

A mutton bowel rubbed with salt and spices is stuffed with finely cut pieces of meat and fat. Then the bowel is sewn up and buried inside heated sand during daytime and in the evening it is tied to a high pole until it is completely dry. After that the meat inside acquires a special pleasant flavor and can be stored for long time. The most widespread meat dishes are: chorba, gainatma, dograma, pilav, govurma, govurdak, shashlick (kebap). Besides mutton game meat is very popular: partridges, hares, goitered gazelles.

Fatty mutton is cut in pieces with bones and put into cold water with addition of onions. When soup starts boiling add washed peas and cook on small fire. 20 minutes prior to readiness add potatoes, tomatoes, spices.

Fatty chunks of mutton are fried in fat until browned crust. Add raw onions, tomatoes, potatoes cut in large pieces, pepper, salt and fry along with the mutton, then stew in a little amount of water.

Mince mutton, onions and fat, add some salt and pepper; stir the resulting mixture and shape it in small sausages; fry them in oil and stew with onions. Serve with churek.

Cut mutton in 10-15 cm strips and use them for wrapping a mixture of chopped onion, garlic, greens, salt and spices. The resulting shashlick is put on skewers and fried on hot coals.

Cut bones-free mutton in pieces, add salt and pepper and fry until ready. When served strew with fried onions and greens.