Popular Turkmen dishes are infused with flavors and cooked using techniques perfected over centuries. Read about our recommended top 10 Turkmen dishes you have to try to learn just how varied and delicious local cuisine can be! 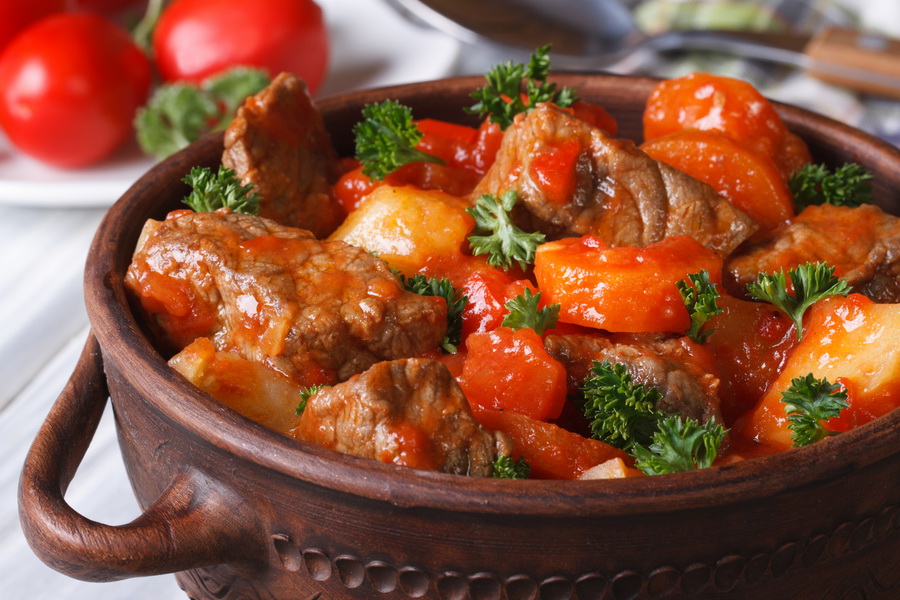 One of the most traditional Turkmen dishes to try is a stewed lamb called chekdirme. Although the Turkmens’ ancestors prepared this dish only with meat, today it is almost always made with vegetables too.

To prepare chekdirme, fatty meat is fried with lamb fat until golden brown. Finely chopped onions are then added, fried and stirred occasionally until they become transparent. Potatoes are cut into large pieces and added. Once they are slightly fried, halved tomatoes, salt and pepper is mixed in. After 5-10 minutes, the meat and vegetables are covered with water and simmered over low heat for about 30 minutes. When serving, it is customary to sprinkle this Turkmen lamb dish with herbs.

Yshtykma (stuffed waterfowl) is not only one of the most delicious Turkmen poultry dishes, it is also low in fat and regarded as environmentally friendly. The bird - usually a duck or goose - is cleaned of its entrails and scorched to remove all feathers before being washed, dried and rubbed on the inside with salt.

Diced onions, raisins and apricots are fried and stewed in sesame oil for 10-15 minutes. The sesame oil not only adds flavoring; it also eliminates odors from the fowl. Garlic and spices are added and the mixture is cooled before being packed tightly into the bird, which is then sewn up with threads and fried in oil. Once it has acquired a dark golden color, a little boiled water and spices are added to the gazan (large pot) and the bird is left to cook. Periodically the water-spice mixture at the bottom of the pot should be ladled over the bird.

Once cooked, the stuffed poultry is placed onto another dish while seasonings and pre-soaked rice are added to the pot with the remaining meat juice. After boiling the water, the rice should be cooked over low heat until the liquid has completely evaporated. When the rice is ready, a depression is made in the center into which the bird is set for a few minutes.

To serve yshtykma, the meat should be cut into pieces and served separately from the rice. 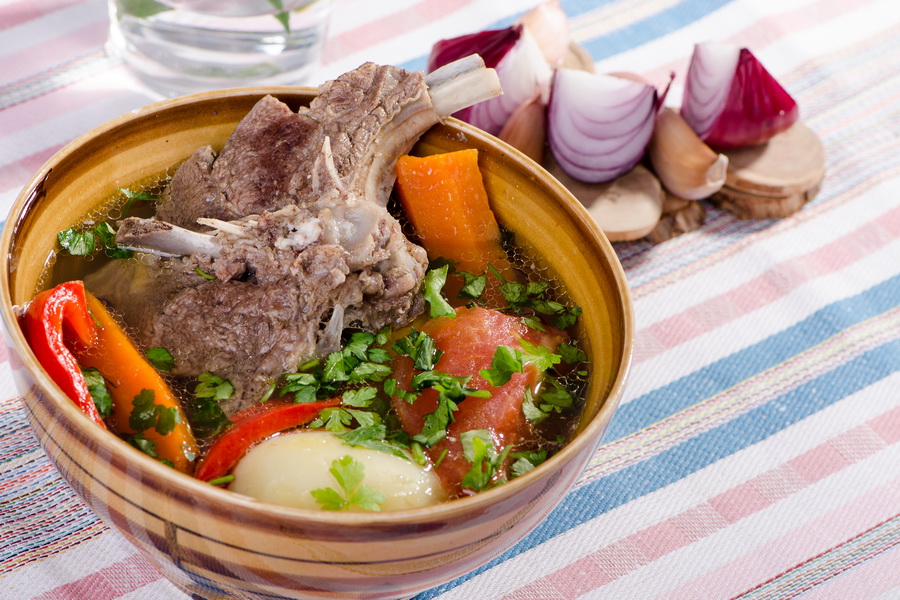 Chorba is the most famous soup in Turkmenistan. To prepare chorba, fatty lamb is cut into small pieces and fried in fat. Finely chopped onions and tomatoes, potatoes, carrots and other diced vegetables are then added. After the meat and vegetables have stewed for about 20 minutes, boiling water and seasonings are added and the soup is cooked until the meat is very tender.

To serve chorba, a plate or bowl is lined with pieces of stale flatbread. The broth is then poured over the bread and topped with the meat and vegetables. Some people like to pour a fermented milk product called gatyk (kefir) on top.

Balikly yanahli ash is a Turkmen pilaf made with fish. Any fish may be used for pilaf, provided it is not fatty. First, the fish is cut into pieces and boiled in water with parsley root, bay leaves, peppercorns and onions. After the fish is cooked it is placed in a clay dish and thoroughly mixed with onions, dill, parsley, saffron, salt and pepper. Gatyk (kefir) is then poured on top and the dish is left to simmer over low heat.

Separately, sesame oil is poured into a cold, dry frying pan and heated until a hint of smoke appears. As onions and carrots are fried in the oil, the broth in which the fish was cooked is filtered and added, along with pre-soaked rice. The pilaf is boiled without a lid until the water has completely evaporated.

When serving balikly yanahli ash, the fish is placed in a separate dish and pomegranate juice is poured over the rice mixture. It is customary to eat this tasty Turkmen fish dish with a tomato and onion salad. 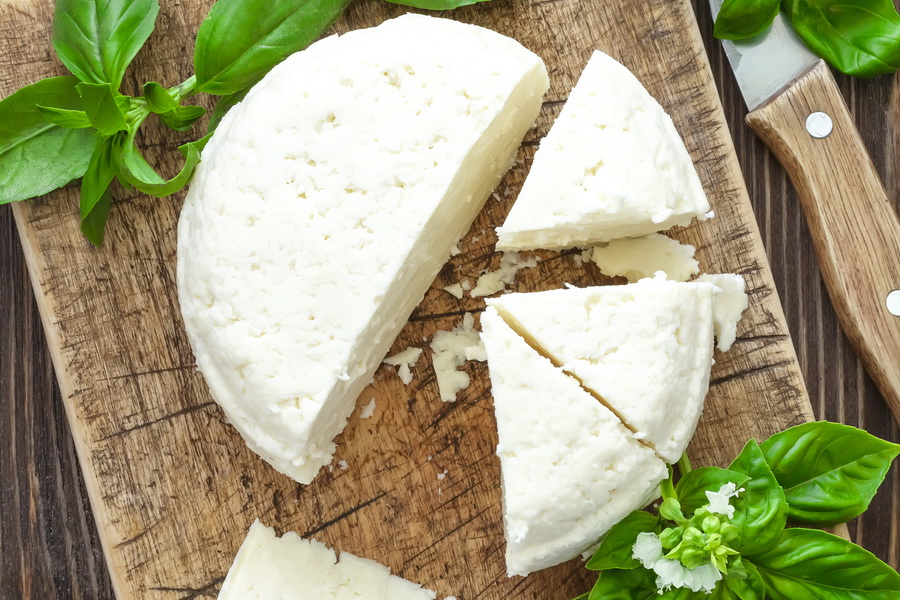 Sakman (peynir) is a cheese made from sheep’s milk which resembles feta cheese. The milk is boiled and cooled to room temperature before sourdough is added. The mass is placed in a thin, clean bag or cheesecloth and suspended so that the liquid can drain. The curds are then pressed and the cycle repeated several times as the cheese slowly solidifies. After a day, sakman cheese (whose name means “squeezed”) is ready to eat. 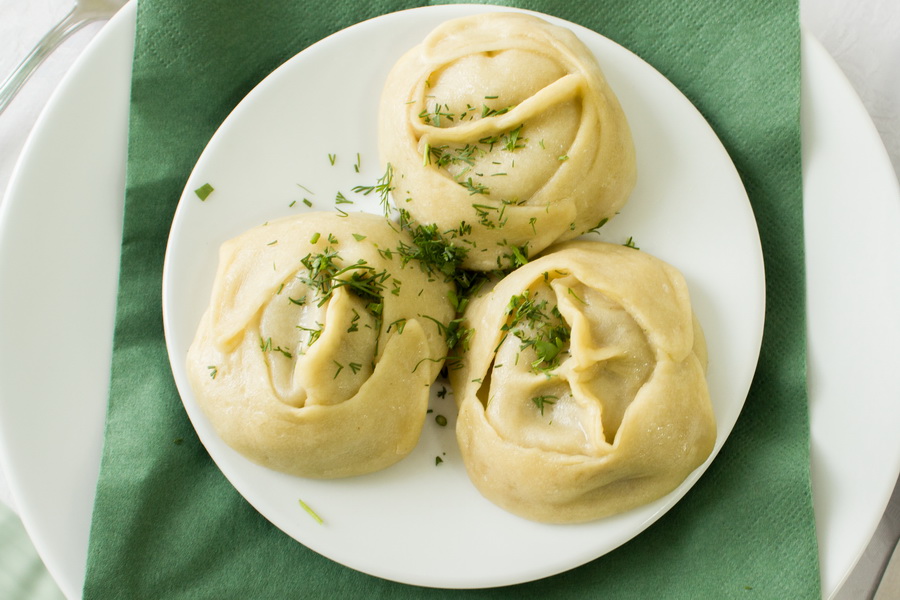 A list of 10 Turkmen dishes you have to try would not be complete without a second fish dish - balyk berek, or steamed manty dumplings stuffed with fish. Any type of fresh fish can be used, but the Turkmens prefer pike perch, carp, mullet, sturgeon, stellate sturgeon or kutum. The fish is cut, rinsed and patted dry with napkins to remove excess liquid. It is then cut into small, square pieces. The filling is made only by hand, without the use of a meat grinder. Finely chopped onions and spices are added to the fish before a raw beaten egg is poured on top and mixed with the minced fish. The filling is placed inside small cuts of dough and the balyk berek is then sealed and steamed. 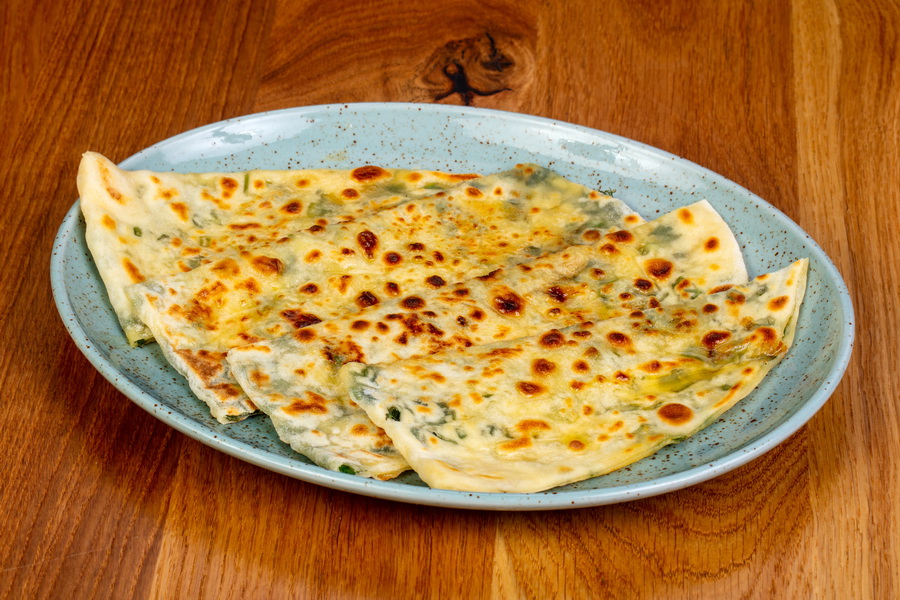 Gutab (gutap) is a crescent-shaped pastry similar to the Russian cheburek. The basic dough, which should be fresh, is mixed with an egg and kneaded in hot water. Chopped meat with onions, herbs (spinach, purslane, dill or green onions) and mushrooms can all be used as a filling, although gutab stuffed with greens are usually only prepared in spring. These Turkmen pies can be baked in a regular oven, a clay tamdyr oven or fried in oil on the stove.

It is impossible to imagine Turkmen cuisine without tea. Although black and green tea are both common, few people know about camel thorn tea, also called yandachny.

Camel thorn is a tumbleweed whose dried flowers and leaves are used not only as a drink but also as a medicine. It contains antibacterial properties and is rich in tannins, flavonoids, vitamins B, P, C and K, saponins and organic acids. Camel thorn may be drunk or used externally to help alleviate upset stomachs, sore throats, colitis, ear infections, hemorrhoids, eczema, wounds and prostate tumors.

Like regular tea, camel thorn tea is prepared by pouring boiling water over the leaves and letting it brew. 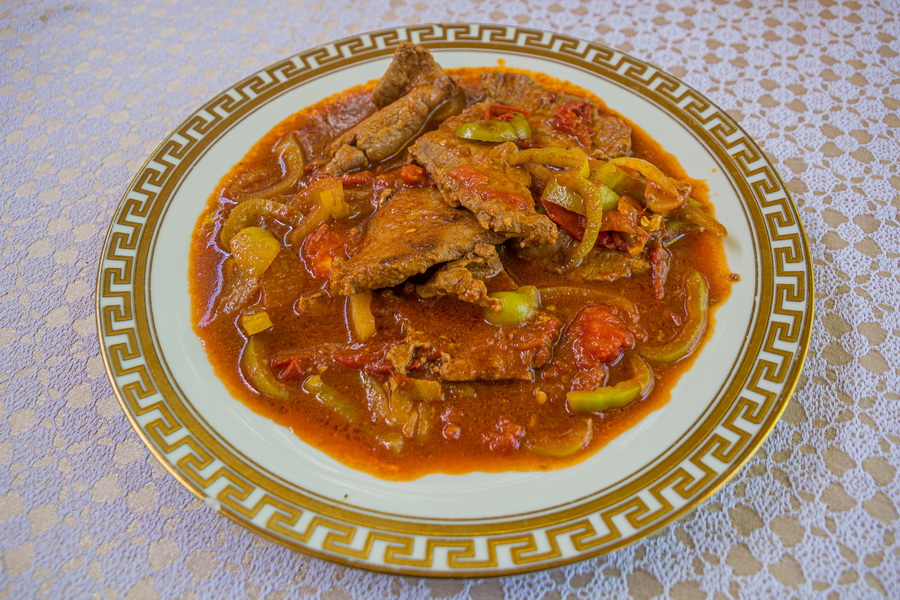 Among the many common Turkmen meat dishes is kakmach, a dried meat made by the Yomuds of the Balkan and Dashoguz Regions. To make kakmach, large pieces of meat still on the bone are tied to long sticks which are planted into the ground and left in the sun for several days.

The tekintsy (teke) residents of southern and central Turkmenistan are masters at preparing a meat called garyn. A ram and its tail fat are cut into small pieces and stuffed into a mutton or goat stomach which has been washed and rubbed with salt and pepper. The meat should take up all the space in the stomach so that there is no air. The stomach is tied or stitched with threads and buried in hot sand to be warmed by the sun during the day. In the evening it is removed and placed on a long stick. The next day, the stomach is removed from the stick and buried in the sand again. This procedure is repeated for several days until the stomach dries up. Garyn, like kakmach, has a special taste and is suitable for long-term storage. Garyn can also be fried. 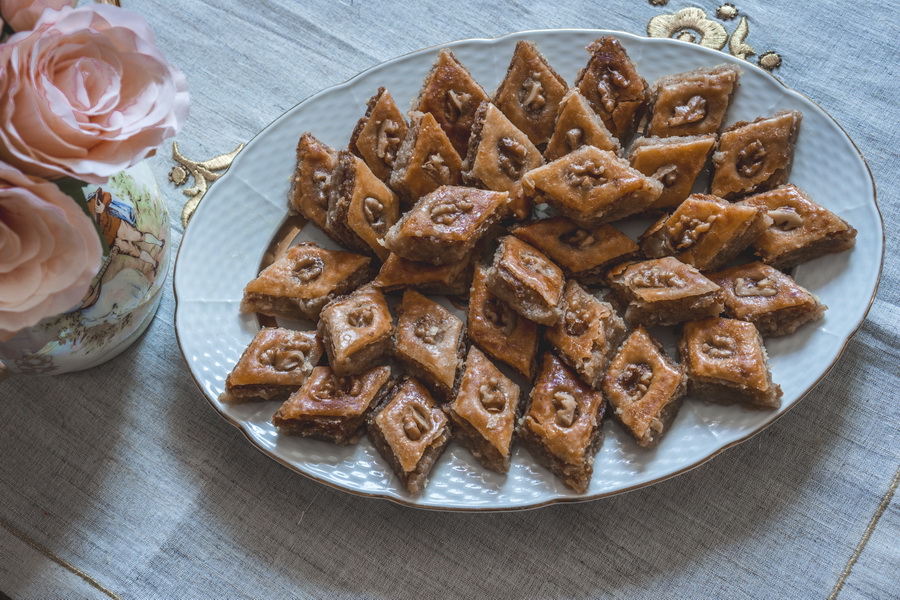 Bakhlava is a puff pastry soaked in honey syrup or sugar water and decorated with walnuts. The first mention of this dessert dates to the 15th century when it was prepared in the palace of the Ottoman Sultan. Some historians believe that bakhlava dates back as early as the 8th century BC.

Layers of paper-thin dough are stacked on top of each other and smeared with oil. The raw bakhlava is cut into diamonds, on each of which a nut is placed. After being baked, the bakhlava is generously smothered with honey.

For a more complete list of traditional Turkmen dishes to try, check out our Turkmen Food page.