Near the minaret of Kutlug-Timur there is the mausoleum of Sultan Tekesh - one of a few survived monuments of pre-Mongol Urgench. The people call it Sherepbaba and Gyok-Gumbez. Together with the mausoleum of Il'-Arslan they constitute the necropolis of one of the ruling Khoresm clans.

Sultan Tekesh was an odious person. He managed to unite the huge territory stretching from the Aral Sea in the north to the Persian Gulf in the south and from Pamir in the east to Iran plateau in the west. In 1172 in order to capture the throne he addressed for help to his former enemies - Kara-Chinese who agreed to help in exchange for annual levy to dethrone his brother. Afterwards, having come to power in Khoresm, he ordered to assassinate his mother. 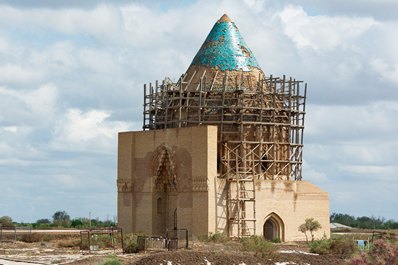 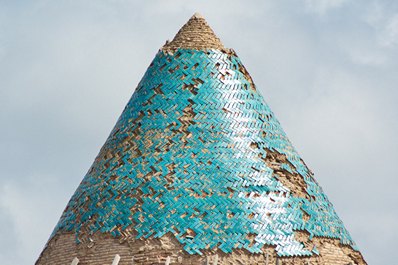 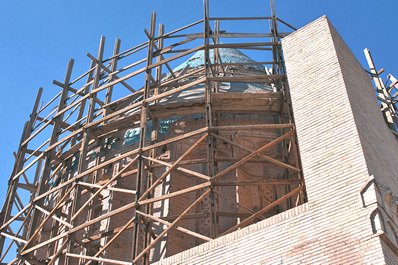 The Mausoleum of Sultan Tekesh once towered above there at the height of 30 meters and was used as a beacon in the desert. The exhausted travelers in the heated desert saw it from a distance and understood that their long journey was coming to an end.

The massiveness and art expressiveness of this monument is often compared to an other masterpiece of the 12th century - the mausoleum of Sultan Sandzhar in Merv. Both structures towered above ordinary houses and were the so-called "symbols of authority".