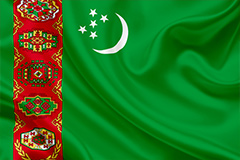 Turkmenistan flag was approved on the 19th of February 1992, and since then it became an official symbol of the republic. Every single element of the flag embodies a special meaning. The green colour on the flag symbolizes life, the earth, grass pastures, prosperity and peace. The crescent moon represents a clear sky over the head of happy people. Five-pointed stars of white colour are a symbol of the five provinces. Vertical red stripe with five ornaments - gyols at the base of the flag, each of which is decorated with carpet ornament, also symbolize the regions of the country. Olive branches signify Turkmenistan's neutrality, declared in 1995. Gyols on the flag, have colours of the four elements: yellow – the colour of fire, white – the colour of water, red – air and green – colour of the earth.