Pearl of Kokand is the palace of the last ruler of Kokand Khanate's Khudoyar Khan. The magnificent palace complex, built in 1871, is a staggering grandeur. The palace was constructed in the traditions of Central Asian architecture with high portal in the middle, decorated with a large entrance arch and four minarets: the two of them stand on both sides of the portal, the two are wings of the facade. 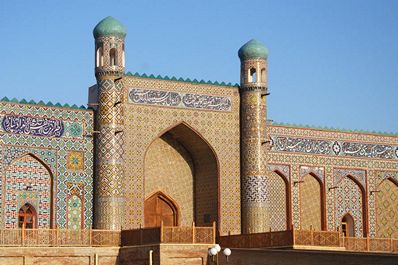 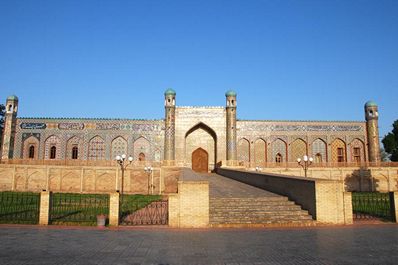 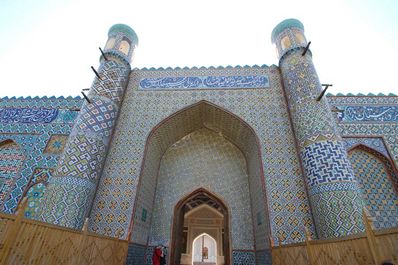 Palace Khudoyar Khan, surrounded by a carved stone wall, consisted of seven small courtyards and 119 rooms. The total area of the palace was 4 acres, his foundation raised by three meters. Above the main gate was inscribed the Arabic inscription: "Great Seyed Mohammad Khudoyar Khan". 16 thousand people, 80 masters, worked on its construction and 1000 carts. were used for it. The people were driven here by force. They had to work in unbearably hard conditions, for the slightest infraction they were levied a fine, corporal punishment. But the efforts were not in vain. Palace Khudoyar Khan turned out great. It still amazes his wealth and magnificence of the decoration. The building facade literally dazzles visitors variegated colors and rich ornaments: geometric designs, arabesques, floral motifs - all made from ceramic tiles. Patterns, fill a niche, represent non-recurring after a drawing of the composition. The color scheme of the facade is very bright and colorful, which gives it a resemblance to the palace of oriental tales. 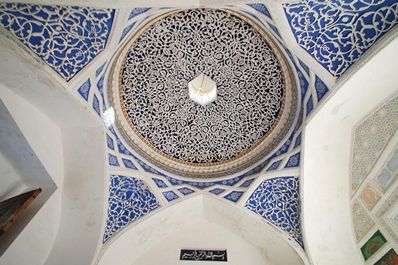 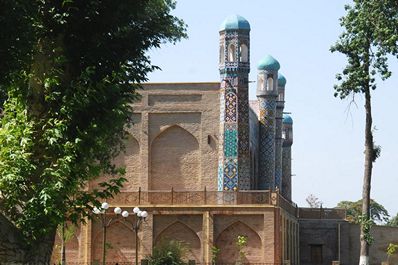 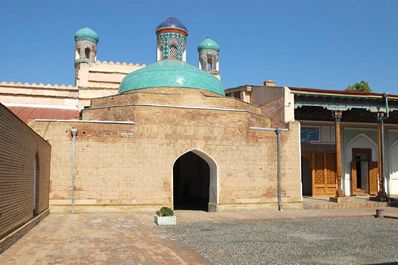 Unfortunately, our days only two of the court and 19 rooms survived fom the grand palace ensemble. An art of carving and painting ganch takes the great place in decoration of ceremonial palace interiors. Ganch panels are filled with compositions of stylized trees (cypress, weeping willow), plants with intertwining branches and stems, leaves and floral rosettes.

Today the palace is the museum of local history, expositions of which tell about the past and present of Kokand.