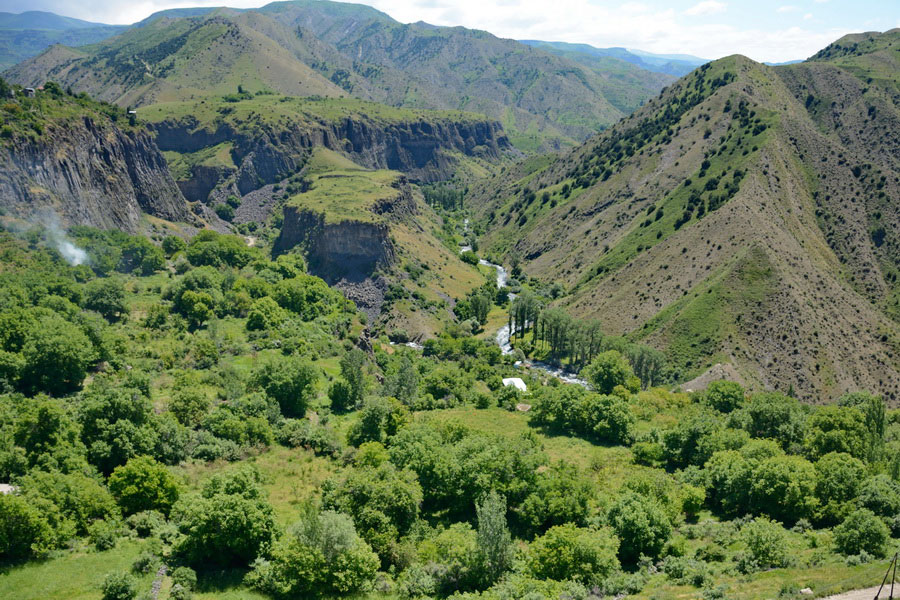 Nature of Armenia was depicted by many painters and glorified by poets. Such writers as Andrey Beliy, Isof Mandelshtam, Valeriy Bryusov and Nikolay Tikhonov wrote of its magnificent beauty and richness. You can see its landscapes on the paintings of Martiros Saryan, Minas Avetisyan and of course, “the singer of the seas” Ivan Aivazovskiy: Lake Sevan and Ararat valley were reflected on his painting works.

Armenia is located on the height of 1000 - 2500 m above sea level, on one geographical latitude with countries such as Spain, Italy and Greece. Armenia attracts tourists not only with its numerous historical and natural sights, but also with its dry continental climate. It is warm in summer and moderately cold in winter, and has 280 sunny days a year.

People often call Armenia as Karastan (Land of rocks), because mountain ranges of the Lesser Caucasus surround from north to east this beautiful country. Armenia is the highest mountainous country of the Transcaucasia; more than 90% of its territory is located on the height of 1000 meters above the sea level. The highest point of Armenia is the Mount Aragats (4090 m). The second highest mountain in Armenia is Kaputdjukh, located 3904m above the sea level.

Armenia has rich deposit of minerals and mining rocks, among which are molybdenum, gold, zinc and others. Besides, there are colossal reserves of different construction rocks: tuff, basalt, travertine, and felsite.

The longest river of Armenia is Araks. The left tributary of Araks is River Razdan that has an important irrigation and hydroenergetic significance. There are hundreds of lakes in Armenia. The largest of all is fresh high-mountain lake Sevan. It is located on the height of 1900 m above sea level, area is more than 1200 square km. Sevan serves as shipping, fishing and resort zone.

Armenia is located at the junction of forest-meadow Caucasus region and desert-semidesert Iranian geobotanical province that is why it has very diverse flora. There are more than 3200 kinds of plants, many of which are included in the Red Book. In the woods of Armenia, that cover 12% of its entire territory, grow oak-trees, beech, maple, ash and wild fruit trees. On the plains of Armenia, one can see feather grass, koeleria, and wheatgrass. For cliffs, the following are more typical: almond, Pallas buckthorn, Paliurus spina-christi and pillow-like plants such as tragancanthae astragalus, acantholimon, stachys, thyme, sage. For centuries, nature of Armenia has been helping people living here to fight against illnesses, wounds and even aging thanks to its variety of healing plants. It is also interesting that Ararat valley has become the center of distribution of the first kinds of wheat and few other grain varieties.

Fauna of Armenia includes rare kinds of animals and birds. There are up to 450 kinds of vertebral animals, 44 kinds of reptiles, 6 kinds of Amphibia and 24 kinds of fish, more than 10000 kinds of invertebrates. It is interesting, that the third of bird kinds of the whole Europe is found in Armenia. Like flora, many kinds of animals in Armenia are included in the Red Book.