He is the Supreme spiritual leader of all faithful Armenians, the keeper and the defender of the belief of Armenian Church, its divine service ceremonies, canons, traditions and integrity. Within the canonic limits he possesses the complete power in managing Armenian Church. 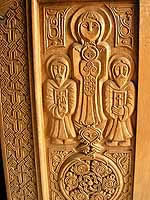 Echmiadzin is the spiritual and administrative centre of Armenian Apostolic Church. There are two monasteries (4 th century), St. Ripsime and St. Gayane which are classical monuments of Armenian architecture. In Echmiadzin there are also the Theological academy and seminary.

Geographically Armenian Apostolic Church is present worldwide but is uniform in its doctrines. Under the influence of political and business factors a part of Armenian population, starting from the 9 th century, was forced to leave the country and search for refuge abroad.

Thus, owing to the historical conditions Jerusalem and Constantinople Patriarchates and Cilician Catholicosat (the Great House of Cilicia), which is now located in Antilia (Lebanon), were formed within Armenian Apostolic Church. These three Bishop chairs in “the spiritual relation” are under the jurisdiction of Echmiadzin, although they have their internal administrative autonomy.