Located 5 km from Echmiadzin is one of the brightest landmarkst of medieval Armenian architecture –the magnificent Zvartnots Temple constructed in the 7-th century. Unfortunately, like the majority of other ancient Armenian temples, Zvartnots has survived only in ruins since it was completely destroyed by powerful earthquake in the 10 th century. But even the ruins of this temple give us the idea of its rare and majestic beauty.

It used to be a three-storied round temple of 49 m height consisting of three differently sized cylinders put against on top of each other crowned with a spherical pyramid-shaped cone. The temple stood on a platform surrounded by stepped pedestal which has partially survived. The temple reminds a cross put into a circle. This cross was the basis of the internal space of the temple. The entire structure was supported by four 20-m mighty columns. The round internal space was surrounded by a two-level gallery. The second level of the church was through from the three sides and its walls rested on six powerful columns. The entire composition was crowned with a tall many-sided dome. Five entrances led to the temple. 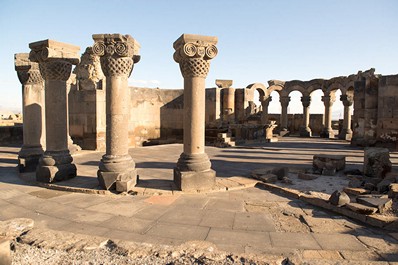 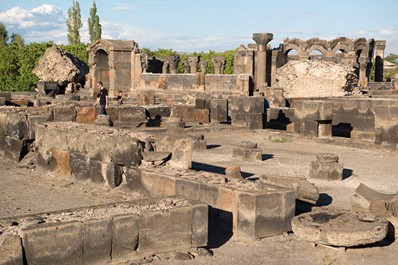 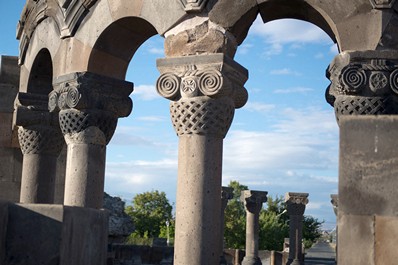 From top to bottom the temple was decorated with the magnificent stone carving. The intricate ornament framed the eaves and braided the window apertures. The temple's walls were decorated with grapevines, branches of a pomegranate, the finest geometrical patterns. The rich mosaic adorned the temple's walls. Zvartnots was also decorated with waist-length sculptures of people. Free natural poses; the detailed elements of clothes, almost portrait-like cut faces give us the idea of how medieval Armenians looked like.

The construction of Zvartnots Temple (the Temple of Watching Forces) began in 641-643 and intermittently continued for twenty years until 652.

Zvartnots had stood for more than three hundred years and around 930 was destroyed by the earthquake. As researchers found the architect of the temple did not manage to transfer the entire weight of the top levels on the four powerful pylons which served as the main supports; as the result the part of the load was applied on the arches and the temple's vaults. It was the weakness of the building's design and the mighty earthquake tore it apart...

With time the huge hill was formed on the place of the temple with the remains of the four pylons. It was only in the early 20 th century that the famous Armenian architect Toros Toramanian tried to start the restoration works in Zvartnots.

Today Zvartnots territory is the archaeological reserve and the museum which was opened in 1937 where it is possible to see the models – possible variants of the temple reconstruction, and numerous sculptural fragments impressive in their sizes. Huge stone slabs with the figures cut in them, the sundial, clusters of grapes and pomegranates have survived in good condition.

The ruins of Zvartnots Temple are designated by UNESCO as World Heritage Site.