Among dozens of sights and architectural structures of Old Baku, its bathhouses can be subsumed under a separate group. Such bathhouses as Gadzhi Gaib, Aga Mikail, Kasum bek, and the famous bathhouses in Shirvanshakh Palace were functioning there.

The general regularities of town planning methods in Baku as well as in the whole East can be traced in bathing building structures. More often bathhouses were built either as part of palace complexes and public buildings, located in the city’s center, or built separately in a city’s service and utility zone.

Special attention must be given to palace bathhouses built in every palace complexes of eastern rulers. Among such Baku’s bathhouses, the one located in the Shirvanshakh Palace, is of special interest. This is a large bathhouse, consisting of 26 premises revealed in the course of the archeological digs of 1939. All the premises of the bathhouse were presumably covered with domes, while the building itself was a basement one. 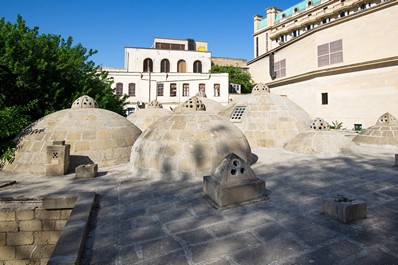 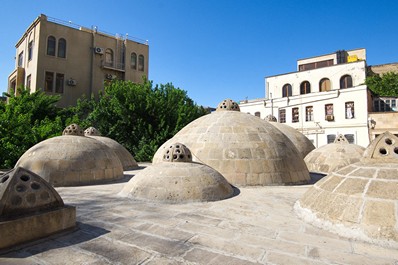 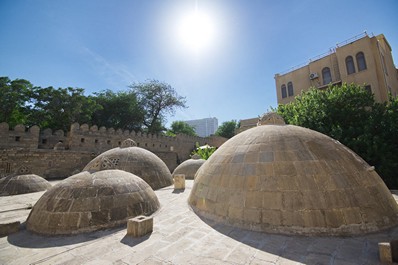 The bathhouse consisting of two square premises were divided into smaller ones. There were rooms for undressing – “baiyr” (outer). They are followed by bathing rooms – “icheri” (inner). The bathhouses were fitted with basins containing hot and cold water – “khazna”. Next to the basins with hot water there was a furnace chamber to heat water. There was also “khyalveti”, a place for single washing. The bathhouse premises were fitted with small swimming pools of round shape and cells for shoes.

The Gadzhi Gaib bathhouse stands out among the ones located in the service and utility zone of Old Town. It is situated opposite the Maiden Tower. The exact date of erection of this bathhouse is unknown, but the scientists date it approximately to the XV century. The bathhouse entrance portal is of square shape. The bathhouse itself consists of an icebox as well as dressing and bathing rooms. The dressing and bathing rooms have octagonal central halls, surrounded with small premises. In the center of the hall there are basins with hot and cold water. The bathhouse, like the one in the Shirvanskakh Palace was heated with a system of channels built under the floor. The Aga Mikail and Kasym bek bathhouses should be also mentioned.

The Aga Mikail bathhouse was built in the XVIII century in the south-western part of Icheri-Shekher by the Skemakhi’s resident Gadzhi (Kafir, non-Muslim) Aga Mikail. The location area of this bathhouse is popularly called rubbers’ quarter. This bathhouse is almost the same as Baku’s other bathing huts, but unlike to the Shirvanskakh bathhouse and Gadzhi Gaib bathhouse, the dressing and bathing rooms are of square shape there.

The Kasum bek bathhouse was built in the XVII century near Salyan gates. This bathhouse was popularly called as “Sweet Bathhouse”, because the tea served there came together with sweets. The bathhouse consists of a vestibule, dressing room, bathing room, swimming pool and furnace chamber.

Bathhouses in the East played an important role in every-day life. They were an essential element of any palace complex or residential quarter. The Baku’s bathhouses are very picturesque from point of view of architecture and interesting to visit.