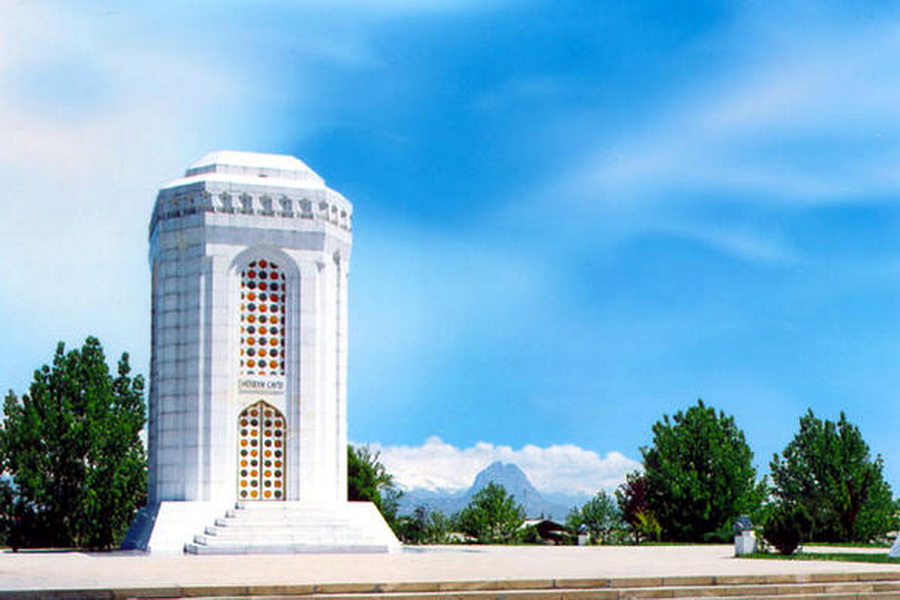 The mausoleum was erected by atabek Dzhahan Pehlivan in April 1186 for his mother Momine-Khatun, who is considered with her husband, the first atabek Shams ad-Din al-Deniz (the father of Dzhahan Pehlivan) the ancestors of the Eldegiz dynasty and the founder of the state of Atabeks.

The most outstanding landmark Nachchivan is skillfully decorated with a complex geometric pattern and quotes from the Koran. Grand decahedral mausoleum was the real medieval skyscraper reaching 34 meters in height. Today it is only 25 meters high.

Each side of the surface is completely covered with exquisitely carved Arab writings in kufic style, styled as geometric patterns. What is more, ornaments of the nine out of ten (sides) are different. Only one repeats itself, on the recess where it was supposed to be an exit. The top of the mausoleum is decorated by a skilful stalactite composition.

The burial place of Momine-Khatun is under the building but there is no entrance to it. Inside the mausoleum has a round shape. The only decorations of its interior are four round medallions covered with inscriptions and ornaments. These medallions are placed on inner side of the spherical dome of the mausoleum and bear the names of the Prophet Mohammed, and four rashidun (caliphs) - Abu Bakr, Omar, Osman Ali, Hasan, Hussein.

The Mausoleum of Momine-Khatun is one of the most monumental buildings of Azerbaijan architecture and is distinguished by an imperial grandeur.