About an hour drive along a new road from Quba is Khinalug, the oldest village in Azerbaijan. At 2,100-2,200 m (6,900-7,220 ft) above sea level, Khinalug has developed its own culture and traditions, and even its own language. The villagers call the place Kyat, and consider themselves to be direct descendants of the biblical Noah.

Khinalug is over 5,000 years old. For centuries, this village was cut off from the rest of civilization by the tall mountains and dangerous rocky cliffs. Due to the isolation, the villagers were able to preserve their own unique language, which doesn’t belong to any other language family, as well as their traditions and customs, found nowhere else. 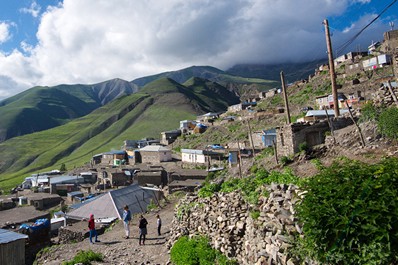 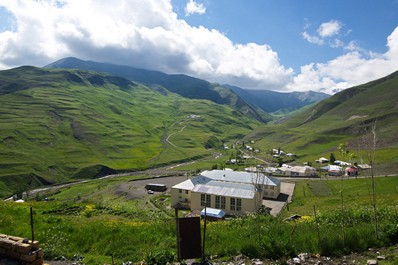 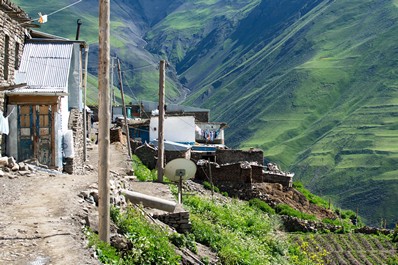 There are about 2,000 people living in the village, divided into 4 families. Each family has its own graveyard and its own patterns for carpets and clothing. Today, the people are Muslim, but before they converted to Islam they were Zoroastrians. There are some temples and semi-pagan traditions that have survived.

The first records of these people date back to the 1st century CE, in the writings of the historian Pliny and the famous Strabo’s Geography. The history of the village is also recorded in the 8 large graveyards, whose area is much larger than Khinalug itself. The graves, made in 3 and even 4 layers, bear inscriptions in different alphabets on their gravestones.

The villagers of Khinalug build their houses one on top of the other. In general, they resemble a multi-story house, where the roof of one house is the courtyard for the one built above it. There are 360 stone houses in the village, each of which is about 200-300 years old. The windows are covered with a polyethylene film, and the ceilings are fitted with a smoke flap, through which the villagers can also talk to each other. The floors and walls are covered with colorful and warm carpets, sometimes woven by the women who live there. These carpets not only decorate the houses, but protect from the cold winter weather. 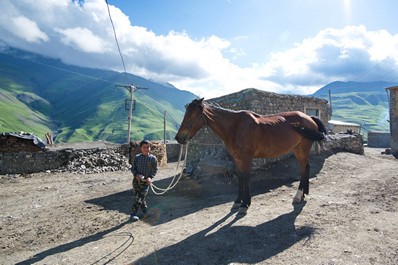 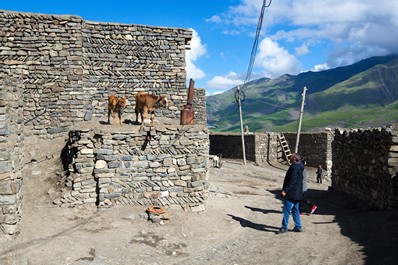 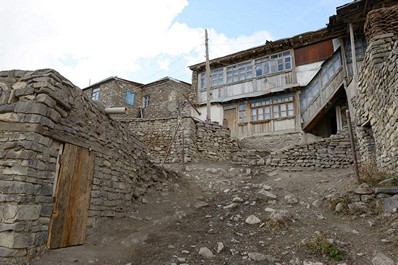 The winters are cold and come early, and temperatures can drop to -30°C (-22°F). Bricks made of straw and manure are used as fuel in the winter. They not only burn well but also provide sufficient heat. Khinalug residents make these bricks all year long, and dry them wherever there is free space. Firewood is a luxury there, since the village is so high up that there are very few trees around.

The soil is generally rocky and barren, but locals manage to grow onions and potatoes in small plots, and cucumbers and tomatoes can be grown in planters, like houseplants. For animals, cows and goats are common, as well as poultry, but sheem are less common. Keeping sheep is difficult because then pens would need to be built to hold the sheep in the winter. The food is rather simple: vegetables, bread (called churek), milk, cheese, mountain honey, and dried goat meat (made each autumn). 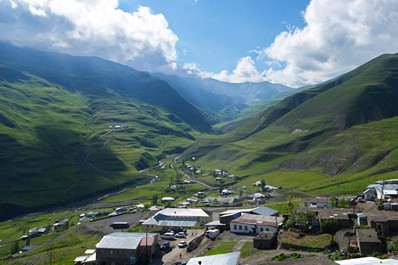 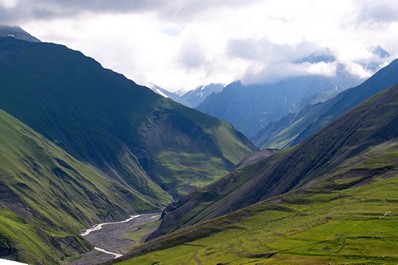 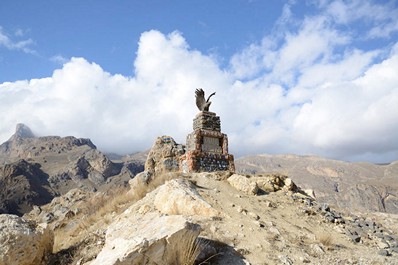 The residents of Khinalug are very religious. There are a lot of holy places not far from the village, such as the graves of saints, caves, and unexplored archaeological sites. Some of them were built as early as the Middle Ages. Dedicated explorers can find the Hydyr Nebi Tomb, Sheikh Shalbuza Mosque, Abu Muslim Mosque (12th century) and the Pirdzhomyard Mosque (1388). The local culture is preserved in the Historical and Ethnographic Museum of Khinalug, where visitors can find items used in traditional life and small exhibits about the history and customs of the local villagers.

With the construction of a new paved road in 2006, local life changed a lot. Tourists started visiting, and locals got a chance to leave the village. Today, many Khinalug residents speak Azerbaijani and some even know Russian. They buy goods in Quba, and trade homespun items, food products, and host and feed tourists who want to get to know this unique village. Khinalug became a little less isolated, though it still retains its unique character. In 2007, Khinalug became a state historical, architectural and ethnographic reserve.