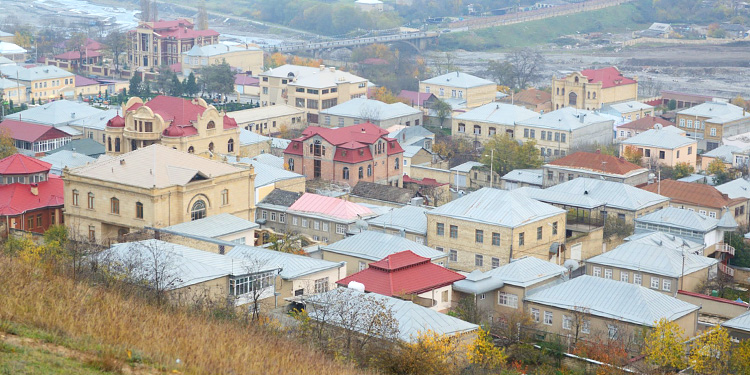 Across the Kudyal River from Quba is Red Town, the largest Mountain Jewish settlement in the former Soviet Union. Red Town is the only entirely Jewish settlement outside of Israel and the United States, and is the last surviving shtetl.

Mountain Jews have been settled in the Caucasus for thousands of years, though there are many different communities and resettlements. Mountain Jews have their own version of Judaism that combines the Old Testament with other traditional practices, as well as a bit of mysticism. They also speak their own language: Judeo-Tat or Juhuri, part of the Persian family.

For a long time, there were Jewish communities in Persia, but after their settlements were destroyed by Nader Shah in the 18th century, more and more Jews started looking for new places to live. At that time, Huseyn Ali Akhan was ruling the neighboring kingdom, and agreed to take a community of Jews and resettle them across from the city of Quba. Starting in 1731, Jews from all around Azerbaijan started to move to this new city. It was named Krasnaya Sloboda, or Red Town, perhaps after the red tile roofs on the houses. Red Town grew, and became a diverse yet closed community of Mountain Jews that has managed to maintain its own culture, traditions and languages for centuries.

The convenient location of the village on the main trading road, the protection of the Quba khans, and fertile land great for farming all helped Red Town grow. Trading connections between the Jews of Red Town and the Muslims of Quba grew with the first wooden bridge built across the Kudyal River in 1851. Aside from farming, local residents also gardened and wove. Their apples were famous around the village, and their weaving was known for its quality. Later, the craftsmanship of the Red Town villagers helped Quba and the surrounding region develop its distinctive carpet style.

Three hundred years later, Red Town has not only stayed intact but has become a state monument, with protection that helps the community stay alive. The rich history and heritage of this small settlement attracts visitors from around the world. But Red Town is famous for more that its history. From a population of a little more than 3,000, there are hundreds of well-known politicians, businessmen, scientists, and notable figures living and working in Russia, Israel, USA, Germany, the United Kingdom, and Azerbaijan.

Russian entrepreneurs such as Zarah Aliev and God Nisanov, and the Soviet orthopedist Gavril Ilizarov (who invented a special device for treating skeletal deformities) were all born in Red Town. The Ilizarovs are also a well-known musical family. The writer Vladimir Agababaev, poet Yasha Mashiahov, Olympian fencer and trainer Zinaida Misheva and others also trace their heritage back to Red Town.

The famous and wealthy of Red Town don’t forget their motherland. Many return to build mansions in the place of older village houses, make donations to synagogues, help schools, and improve the infrastructure. Despite this, the future of Red Village is still uncertain. Many young people leave the village for life in bigger cities, so the main inhabitants now are women, the elderly, and young children.