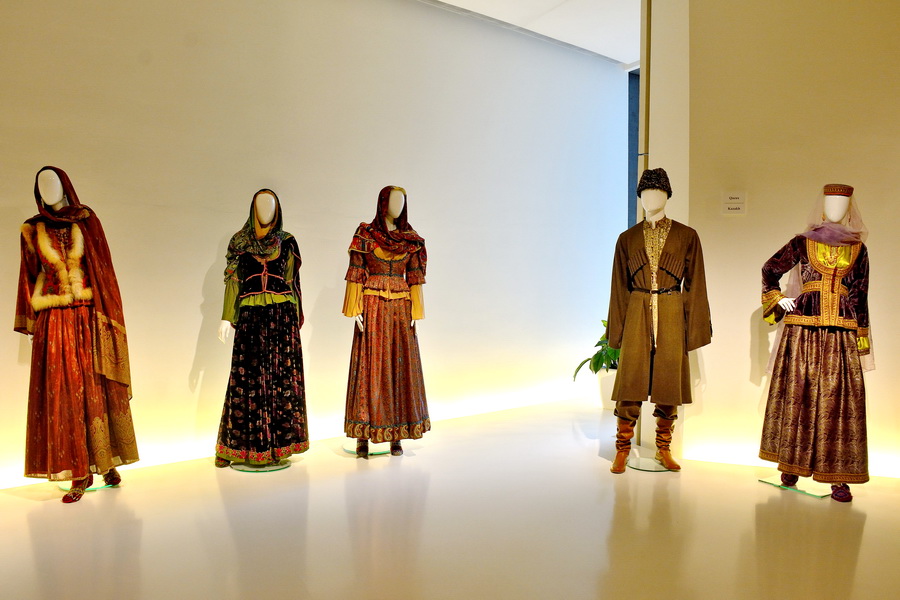 National costumes of Azerbaijanis are very beautiful and original. Female dresses are graceful in silhouette and cut, emphasizing supple waists of Azerbaijani beauties. They are decorated with intricate embroidery trimmed with beautiful "gold" bands.

Menswear is also very original. It emphasizes courage should not be too tight to constrain swift movements.

Women's wear was made basically of silk and velvet, the man's - from cloth and home-made cashmere fabric.

A remarkable element of Azerbaijani clothes is underwear. Both female and male it was made of linen and cotton fabrics. Rich beauties could afford silk ones.

The style reflected the marital status and age of the owner. A young girl's wear noticeably differed from a married women's. Young women dressed the most brightly and elegantly.

The shirt used one button on the collar. The sleeves were normally long, wide and straight. The front bottom part of the shirt was decorated with silver or gold coins.

Tight fitting chepken (caftan) was worn over the shirt. On the sides chepken had sleeves ending in oversleeves. It was made of velour and various glittering fabrics.

Arkhaluk is considered one of the most widespread kinds of clothes in Azerbaijan . It was also tight fitting and had a lining. Some arkhaluks had straight wide cut and slits on both sides. Arkhaluks were made in different sizes.

Ashmek is quilted outer clothing. The inner part, the collar, the sleeves and the hem of ashmek were trimmed with fur.

Kzurdu is a quilted sleeveless women's wear with open collar and slits on doth sides. Kyurdu wes made of velour.

Bakhari s a quilted lined women's wear. The sleeves were straight down to knees, the collar was open. Bakhari was mainly made from velvet. The collar, the hem and the sleeves were trimmed with various bands, edgings and chains.

Kyuleche is upper women's top with goffered hem. It had down to knees length; the sleeves were below elbows.

Tumans (skirts) which were worn by Azerbaijani women were long - down to the floor. Tuman was made of silk or a woolen fabric with various patterns consisting of 12 pieces. Tumans could be goffered or pleated and were decorated with pompons made from color silk or gold threads.

Gold or gilded silver belt were worn with arkhaluk or chepken. Besides them there were also leather belts with sewn on silver coins or with a silver metal plate.

Women wore boots with the embroidered surface and high boots with long legs.

The most popular female headdresses were skull-caps and silk kerchiefs. Outside home girls put on a veil.

Upper man's shirt has a button or a buttonhole. A man's shirt was made of satin and sateen.

Arkhaluk was a close-fitting wear. Its hem was decorated with frills, sleeves were straight gradually narrowing in elbow. Arkhaluk could have one or two pockets; they were collar-buttoned. For making arkhaluk cashmere, satin and sateen were used. With arkhaluk young men wore a belt or a girdle and adults or elderly men used a sash.

Chukha is a kind of upper menswear in Azerbaijan . There were buttons or buttonholes along the entire length of the sleeves slits. On chukha chest were stripes for decorations.

Man's wide trousers were made of woolen fabric. They were wide enough for a man to ride a horse.

In winter they wore sheepskins and fur coats from natural leather and furs.

In was indecent in Azerbaijan not to wear a headdress. The popular kinds of man's headdresses were various papakhas made of leather. Widely spread were arakchyns from silk fabric and decorated with gold embroideries. Elderly men and old men carried soft quilted "teseks" from white coarse calico.

Man's footwear made from chamois leather was one-color and without patterns. In cities the men wore boots, in the country - charyks.