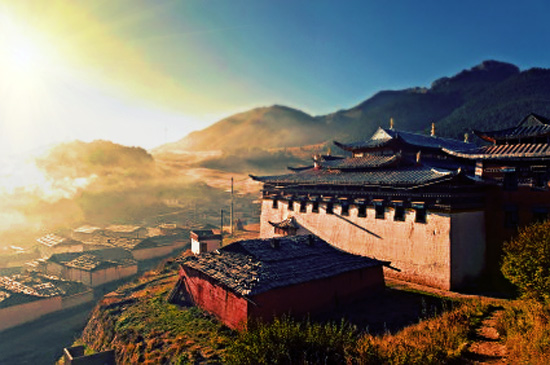 The ancient and distinctive land of China - Gansu Province

For centuries Gansu was the vital corridor between China and Central Asia: there passed almost 1600-kilometre section of the Silk Road. The province was considered the “gold sector” of that international route. As a proof you will see numerous ancient monuments scattered along the entire Silk Road - temples, monasteries, pagodas, towers and ancient palaces. Besides, the province has a considerable part of the Great Wall of China, whose ruins can impress you with their sizes.

Gansu boasts its 2,200-year-old history. The territory of the modern province of Gansu was conquered and developed before Christian era. Gansu province was first mentioned in the sources of the imperial dynasty Northern Song (960-1127) when the imperial military department on Gansu affairs was established in Ganzhou (now Zhangye). In the time of Mongolian Yuan dynasty (1279-1368) the region was officially annexed to the territory of Gansu province. It was created by merging Qingyuan, Lingao and Feng.

The region is well-known for its traditions of horse breeding (the first farms appeared during the rule of Wu of Han in 100 BC). From there horses started spreading all over China; the battle horses from Gansu were the backbone of the military divisions of ancient Chinese army.

The region has repeatedly changed its names: Ganzhou (Cao Wei – 220-265, Tang dynasty – 618-907), Suzhou (the old name of the modern city of Jiuquan). In antiquity the area was also named Lunsi or Luniu marking the region’s geographical position in the western part of the Lunshan mountains.

Standing on the Silk Road made the territory multinational. As a result various religions have settled there: Buddhism, Islam, Christianity, Confucianism and Taoism. The province is populated by Tibetans, Hui people, Uyghur people, and Mongols.

Cities of the Gansu Province

Lanzhou, which is over 2,000 years old, is the heart of Gansu province since it occupies its central part. In antiquity it took the strategic position on the Silk Road. The army of the well-known general Ho Tsui Bin was deployed there. The city stands at the crossing of the Silk Road and the Hwang Ho and spreads like a narrow strip along its southern bank. In the south it is stopped by steep mountain slopes. One of the main places of interest in Lanzhou is Binhe Park. It is located in the northern part of the city long the Hwang Ho. The park has a great variety of blossoming plants, flowers and trees with sculptures reflecting various periods of Lanchow history among them. There you can look at the statue of Mother of the Hwang Ho, the group of camels on the Silk Road, the pilgrims heading East and others.
More on Lanzhou

Located in the province’s northwest on the very edge of the Taklamakan desert is the city of Dunhuang. It is the most known historical place of Gansu province. The founder of the city of Dunhuang was the emperor of Hanshui Wu Di (117 BC). Throughout the entire period of ruling Han dynasty the city was the main link between China and the rest of the world. Later it became the terminal on the Silk Road which made it the target of numerous attacks. To the north from Dunhuang there is the fortress of the Great Wall of China, - Yumenguan, and to the south the ruins of Yanguan fortress. The fortresses served as outposts for caravans of camels and horses. The glorious historical past of the city gave it the rich artifacts collection which is carefully preserved - Buddhist temples with sculptures, pictures, frescos, and utensils.
More on Dunhuang