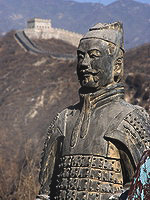 The Chinese history may be divided into three periods:

Pre-imperial history of China was characterized by unstable political power, mainly concentrated in hand of religious leaders. Governors-generals of small principalities and provinces were in fact independent from rulers’ authority. The most powerful dynasties out of the three ones of that period was the Shang dynasty, however it did not managed either to avoid the internecine wars which eventually made the Shang-Yin state fall into decay.

The Chinese history of imperial dynasties covers a huge period of time from221 BC till 1911 AD. China under eight powerful dynasties: Qin Han, Sui, Tan, Song, Yuan, Ming and Qing, developed into one of the world’s strongest countries, becoming the leader in the Asian Continent.

Development of China as a single integrated country starts under emperor Qin Shi Huang Di (221 BC), who united seven Chinese kingdoms and conquered many adjacent territories. However Qin Shi Huang Di is famous not only for his political services for China, but also for his well-known Terracotta Army, which has been protecting the entrance to his shrine almost 2,000 years. An etched mark in history of China was left by the Tang dynasty (618-907 AD), whose ruling is often called as “Golden Age” of China.

In the XIII century China suffered from invasion of the Mongols headed by Genghis Khan. This period in the Chinese history is one of the most tragic, since the Mongols occupied practically the whole Chinese territory, and founded their Mongolian dynasty of Yuan there. In year 1644 China was set to invasion for the second time, when the Manchus blot out the Ming dynasty, becoming Chinese rulers. The Manchu dynasty of Qin was the last imperial dynasty of China.