Pre-imperial China (the dynasties of Xia, Shan, Zhou up to 221 BC) 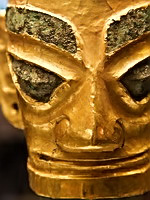 The pre-imperial period of the Chinese history is understudied. According to the annals the founder of the first Chinese Xia dynasty was emperor Yu the Great. The representatives of this dynasty were ruling from 1989 BC till 1756 AD. The center of the Xia was located in Shanxi province. It is only known about the Xia Dynasty is that the state authority was divided between clerical and secular rulers, however a secular ruler at the end of the existence of this dynasty exercised purely formal authorities. What is interesting, it was the rulers of the Xia Dynasty who compiled the first Chinese calendars, which a chiliad later were put into practice in China again.

The representatives of this dynasty are believed to be nomads who professed Totemism. Their inner structure had matriarchal relations in the basis, since they worshiped the spirit of the Earth, which personified the feminine. The Shang-Yin State was located in a vast territory, which included Shanxi, Shaanxi, Hubei as well as part of Shandong and Anhui provinces. The political system was represented by the ruler’s authority, however small princes were exercising plenary powers at that. China has preserved a great number of archeological finds of the period of Shang-Yin dynasty displayed in Chinese museums.

The Shang-Yin dynasty was replaced by the Zhou which came to power in its western borders shortly before the decay of the Shang State. The Zhou tribes were cattle breeders, but within several centuries they managed to adopt a sedentary way of life. This period of the Chinese history is studied better. The dynasty was ruling in the IX – III centuries BC. Its capital was Tszunchzhou (not far from Xian). However, in year 770 BC, threatened by a barbarian invasion the Zhou ruler moved to Chenchzhou (Luoyang), conceding the territory of the old capital to his ally, who established its Qin appanage there.

The Zhou dynasty period was marked by constant wars for the territory and weak central authority. In the V-III centuries BC China entered the age of Warring States, when the Zhou State as such did not exist anymore, and its territory was divided into seven kingdoms: Wei, Zhao, Han, Qin, Qui, Yan и Chu. Afterwards they were united by the Qin ruler Shi Huang Di.