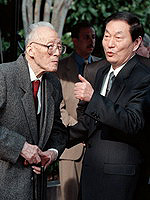 The beginning of XX century in China was notable for the activity of revolutionary forces. The yoke of imperial officials and permanent tax increases caused the unrest in different parts of China. In 1900, Beijing experienced the "Boxer Rebellion". The rebels attacked the quarters of foreigners. Only the joint forces of the European expeditionary forces were able to suppress the uprising.

The Xinhai revolution initiated in 1911, led to the fall of the imperial power. General Yuan Shikai forced the Manchus to abdicate the throne. In 1912, a constitutional republic was formed under the leadership of Sun Yat-sen, the founder of the Kuomintang. However, in the course of the race for power between Sun Yat-sen and Yuan Shikai, China found itself on the verge of occupation by Japan, in the course of which it captured the province of Shandong.

One of the turning points in the history of China began in 1921, upon formation of the Communist Party of China headed by Mao Zedong in Shanghai, five years later, in year1926, Sun Yat-sen died and the leader of the Kuomintang was chosen Chiang Kai-shek.

Later on, almost 30 years, China was suffering from a struggle between the Communist Party led by Mao Zedong and the Nationalist Party led by Chiang Kai-shek, which ended with the victory of the first. During the Second World War, the eastern part of China was re-occupied by the Japanese, who fled the country after the capitulation.

In 1949 Mao Zedong, the leader of the Communist Party of China proclaimed the establishment of the People's Republic of China, which still exists today. Modern China is one of the world's developed countries, which boldly entered the XXI century - the era of technological advances; however the Chinese still revere their ancient history and respect the customs and traditions established by the ancestors.