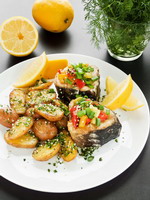 Rich in taste and so different cuisine of Adjara is similar to a large extent to the Georgian one, but at the same time possessing its original and unqie features. This has been influenced by climatic conditions, mountain lifestyle and neighbouring Turkey. Mountain Adjaran cuisine offers much dairy. They are convinced that the most useful thing in Georgia is the milk of Adjara, and their special cheese as the best in the whole world. High value is given to local sour cream called 'kaymaghi' that are served as side dish. Adjarans also widely use melted better in their cuisine.

The most popular dish of Adjara is Adjaran khachapuri: cheese breed in a form of a ship filled with melted cheese with egg yolk symbolizing a sun in the middle. Also there are 'borano' - cheese with greens rolled in flour and fried in melted butter, 'sinori' - snack from home-made quark and rolled into thin bread and 'yakhni' - stewed beef in ground walnuts, onion and garlic. We can't leave without mentioning Adjarian kavarma and achma.

There are many fish dishes (trout and sturgeon), but they prefer poultry (chicken, turkey and quial), beef and lamb. They almost never use pork.

Naturally, there are traditional Eastern sweets that are served on Adjarian table such as baklava and shakarlama.