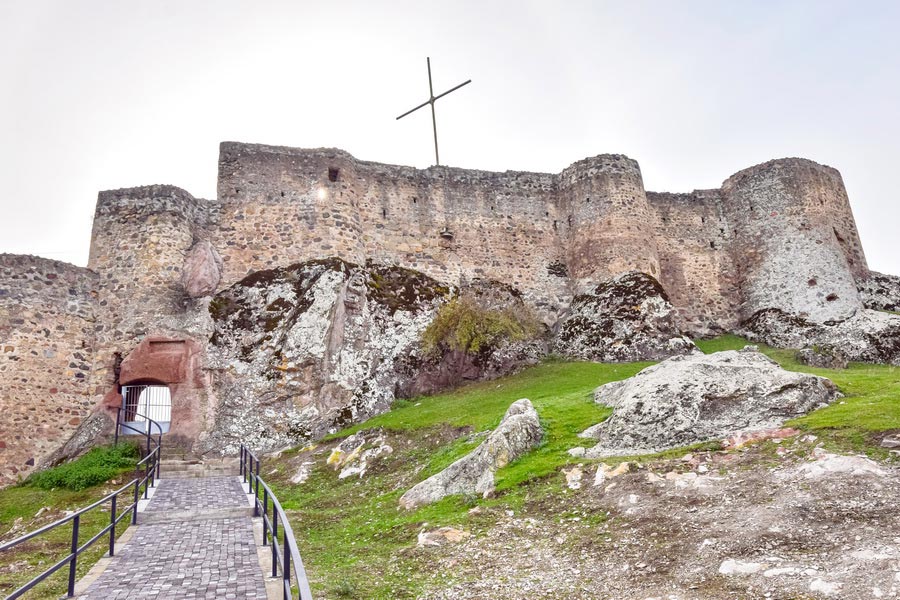 Kveshi Fortress is a centuries-old fortification in Georgia’s Bolnisi Municipality which is situated near a settlement of the same name. The stronghold sits near the Mashavera River on a cliff which formed naturally from an open field. Its location on a nearly inaccessible rocky ridge was ideal for surveying and defending the entire Mashavera Gorge and surrounding areas.

Today the fortress is located just 11 kilometers from Bolnisi on the way to Dmanisi and cannot be missed from the road. It's a great place to visit for anyone wishing to see a stunning ancient castle and off-the-beaten-path attraction. Entrance to Kveshi Fortress is free of charge, and thanks to a well-paved road leading up to the fort it is now easily accessible by car.

The fortress is estimated to belong to the pre-feudal era. The earliest mention of Kveshi is found at the beginning of a 7th-century text on Armenian geography. In the 12th century Queen Tamar gifted Kveshi Fortress and two other Kvemo Kartli outposts – Orbeti and Cain – to Vardan Dadiani and his son. The elder Dadiani served as msakhurtukhutsesi, head of the royal household in feudal Georgia. According to King Tamar's historian, Vardan Dadiani chose Kveshi as his residence from among his many estates in Western Georgia (and Orbeti Fortress in Kvemo Kartli itself) due to its inaccessibility. After Dadiani staged a failed mutiny against Queen Tamar in 1191 in support of Tamar’s husband Giorgi Rusi, he lost possession of the fortress.

The governorship of Kveshi Fortress was then given to the Toreli family, who were loyal supporters of Queen Tamar, and the branch of the Torelis-Javakhishvili family who possessed this castle has been known as Kvesheli ever since. Kveshi retained its political importance during the reign of King Bagrat VI, likely due to the trade routes that led to Kveshi Fortress which doubled as customs checkpoints.

The castle, however, did not last long in the hands of the Javakhishvilis. Following Constantine II's coronation the Baratashvili family began to rise to prominence in Kartli, and in 1486 were placed in charge of protecting the Dmanisi and Kveshi ravines. In the 16th century Kveshi remained a significant fortification and was even designated as the Kartli Kings' home. That same century the Orbaliani family gained command of the castle and remained in power until it was placed under siege at the end of the 17th century. The siege led to Kveshi being abandoned until it was confiscated by the Russians at the turn of the 19th century. Kveshi Fortress is now a popular tourist destination.

"In general, it appears that the stronghold has undergone many restorations, and I do not believe there has remained anything from ancient times, except for the wonderful 1.50-meter-wide stairway", wrote Professor Levan Muskhelishvili (1900-1942).

Kveshi Fortress is constructed from crushed stone, with limestone used as mortar. The stronghold’s sole entrance is carved out of natural rock. Even today, a tower and traces of several buildings can be found. Small water reservoirs have been carved into the rock outside the fortress and a tiny hall-style chapel constructed from well-crafted blocks stands in the courtyard.