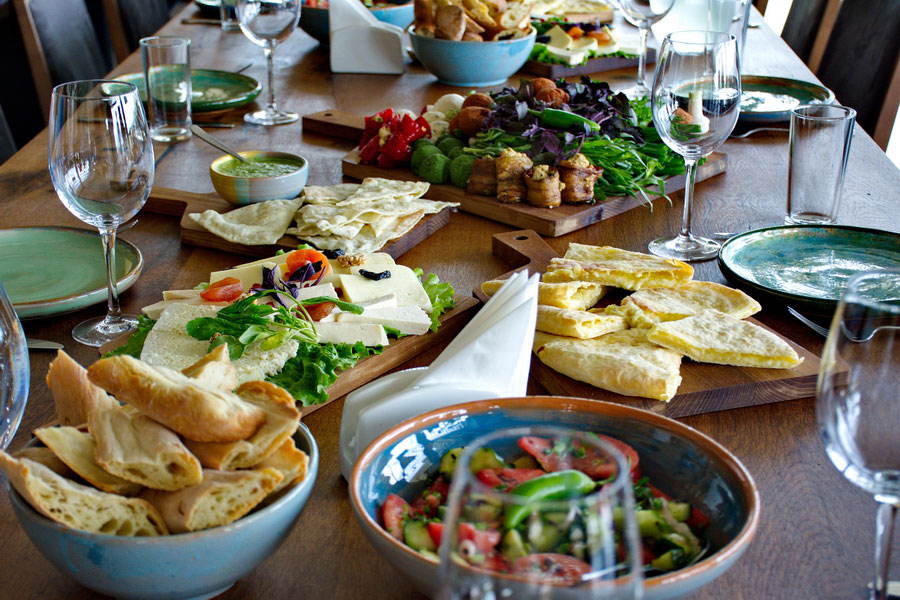 Georgian national cuisine is a highlight for tourists in Georgia, many of whom discover that legends of noisy feasts overflowing with food are no exaggeration. No guest will go hungry in this country, where the rich seasonings and sheer variety of dishes cause many to fall in love with traditional Georgian cuisine from the very first bite.

The origins of Georgian food are ancient. Khachapuri, for example, was first baked in the Middle Ages. Based on historical records we know that this cheese bread recipe has changed little since that time, save regional variations now prevalent in the country.

Cuisine in Georgia today may be divided into three subgroups: Georgian, European and Asian dishes.

Georgian national cuisine is known around the world for its rich and diverse menu, making it difficult to single out any one dish. Everything here simply tastes delicious! Elegant Georgian restaurants and tiny mom-and-pop outlets alike will equally please, for while recipes may differ, their tastes and the unique atmosphere in which they are served never cease to satisfy.

Georgian cuisine is replete with delicious wine and cheese, with each region of the country laying claim to its own special recipes. Rather than provide you with an endless list, we recommend that you make it a point to try Georgian food, wine and cheese in every province that you visit.Georgians eat many nuts and add them to famous dishes like pkhali salads, eggplant appetizers and churchkhela candies. Nuts are also served by themselves as a snack, so if you notice them on the tables of any eatery, be sure that it is a Georgian restaurant.

European cuisine in Georgia can include British, Irish, Italian, Spanish, Russian, French, Polish and German dishes and even American and Mexican foods.

American cuisine in Georgia is nearly synonymous with fast food chains offering burgers, french fries, chicken wings, donuts and the like. You can find a wider selection of American foods in European restaurants, including steaks and barbecue.

In Georgia there are few Mexican restaurants, but tacos, nachos, burritos, fajitas, tortillas and guacamole can be tasted in some restaurants alongside American food and even in the occasional Georgian cafe.

There are many Italian restaurants in Georgia, and curiously in select national cafes Italian dishes have blended on the menu with Georgian recipes. Georgians love pizza, pasta, bruschetta, minestrone soup, ravioli and frittata. Italian caprese salad and tiramisu dessert are standard fare in nearly all restaurants serving European cuisine.

There are no Spanish restaurants in Georgia, but Spanish cuisine served in European cafes includes chorizo sausage, jamon cured ham and gazpacho soup.

Turkish cuisine is loved in Georgia. There are many Turkish restaurants where you will be treated to huge Turkish breakfasts, pogaca buns, menemen scrambled eggs, delicious soups, juicy kebabs, doner wraps, pide bread and more.

Although both Japanese and Chinese restaurants exist in Georgia, Japanese sushi, miso soup and delicate sashimi are more popular than Chinese salads and udon noodles. Thai dishes can only be tasted in Japanese or Chinese restaurants, save tom yum soup, which is also served in European eateries.

There are many Indian restaurants in Georgia where you will be served thali platters, chapati bread, palak paneer and other curries, dhal lentils, dahi vada fritters and other Indian favorites.

Georgian national cuisine and international foods now available in the country are such a delight that on your tour to Georgia you can expect to bring wine, souvenirs and a couple of extra pounds home with you!