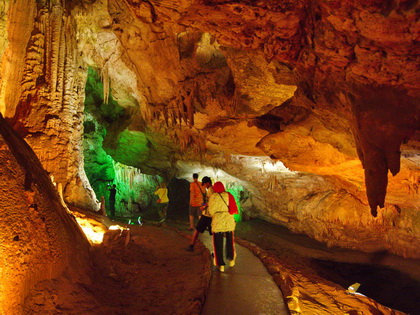 Day Trip to Prometheus Сave is an unforgettable journey to the ancient capital of Colchis and Kingdom of Imereti. Prometheus cave will surprise you with magnificent views of stalactites and stalagmites lightened up with colourful LED lights. Best site for selfies! 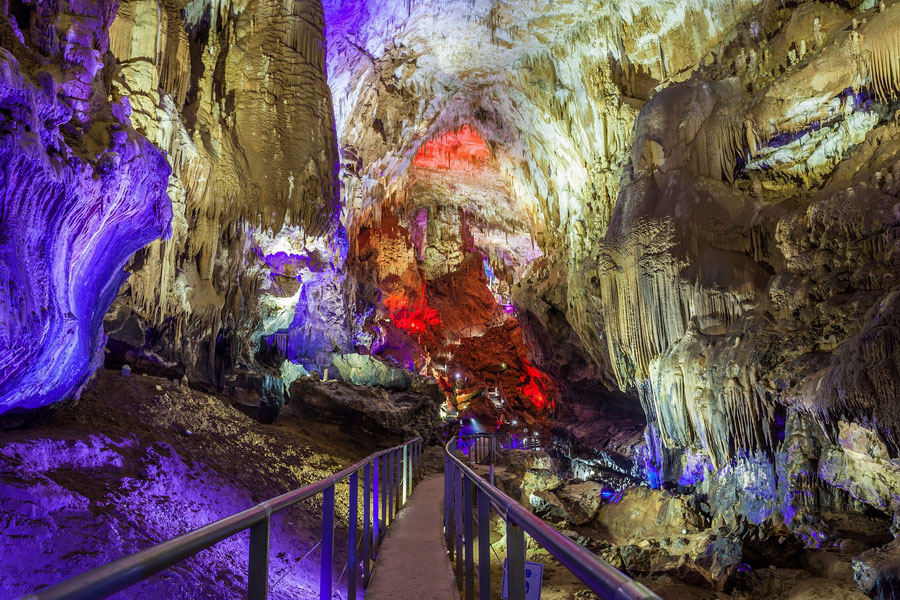 Prometheus Cave is a world-renowned site of natural beauty and a must-visit site in Georgia. A visit to the cave, which is decorated with amazing stalactites and stalagmites, is a journey into a fabulous underground world.

The cave is located in the village of Kumistavi in the west of the country. The 22km drive from Georgia’s second city, Kutaisi, takes only about 30 minutes.

Prometheus Cave developed 60-70 million years ago in the Sataphlia-Tskaltubo karst massif. While it is known to be the largest cave in Georgia, the cave’s exact size is unclear as exploration work remains underway. However, a 1.8km long segment, thought to represent just 10% of the entire cave, is open to visitors.

To date, 22 halls have been discovered inside the cave. Only the following six halls are accessible to tourists: Argonauts, Kolkheti, Medea, Love, Hall, and Iberia. It takes about 45 minutes to explore these magical halls full of stalactites, stalagmites, and underground waterfalls, lakes, and rivers. The spectacular coloured lighting, combined with soft classical music, evokes a beautiful and mysterious atmosphere. The last part of the trail through the cave can be travelled on foot or on a boat along the underground river, Kumi (the boat trip adds 15 minutes to the journey). 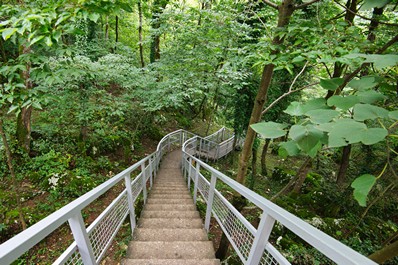 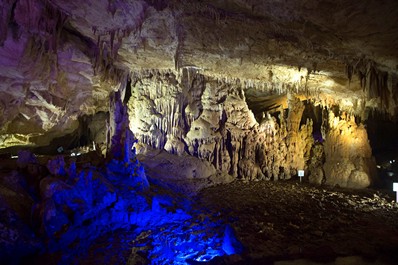 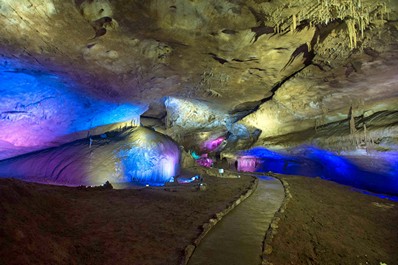 History of the Cave

In 1982, the Soviet authorities started searching for caves that could protect the population during a nuclear war. For this purpose, a special group was formed at the Institute of Geography in Tbilisi. On 15 July 1983, members of the Institute’s speleological expedition, Jumber Jishkariani, Amiran Jamrishvili, Vakhtang Kapanadze, and Tamaz Kobulashvili discovered a new cave near the village of Kumistavi. The following year, work began on a tourism development plan for this cave. Later, a detailed study of the cave began, led by the academic Zurab Tatashidze. Between 1986 and 1990, the first paths were created in the cave, with a total length of 1,050 metres.

However, after the Soviet Union collapsed, Georgia found itself in a difficult economic situation. As a result, all work in the cave was suspended. Nevertheless, during this time a guard called Giorgi Tkabladze protected the cave from vandals without receiving any remuneration. In 2010, a statue of Tkabladze and his dog was placed at the cave’s exit, to commemorate their incredible work.

In 2007, rehabilitation work started once again in the cave. After many years, a detailed study was conducted, and new infrastructure was developed. The cave was officially opened to visitors in 2011 and named “Prometheus Cave”. Much of the cave requires further research, and exploration work is ongoing. 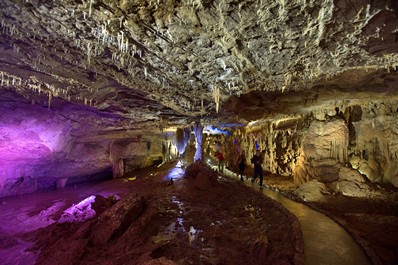 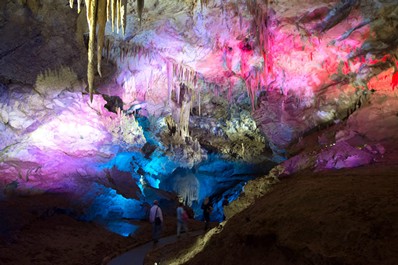 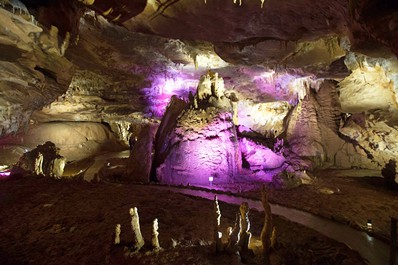 Name of the Cave

The name “Prometheus Cave” is linked to the Greek myth of Prometheus, who was chained to a rock in the Caucasus mountains for teaching humans the secrets of the Gods – in particular, for giving them fire. Zeus sent eagles to feed on Prometheus’ liver, which, as the liver was perpetually renewed, caused him pain every day.

In addition to the cave being named after Prometheus, the Argonauts’ voyage to Colchis in search of the Golden Fleece is represented in the names of the cave’s halls: Argonauts Hall, Kolkheti Hall, Medea Hall, Love Hall, Prometheus Hall, and Iberia Hall. 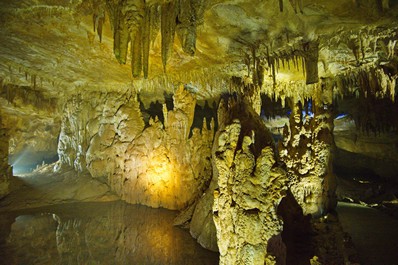 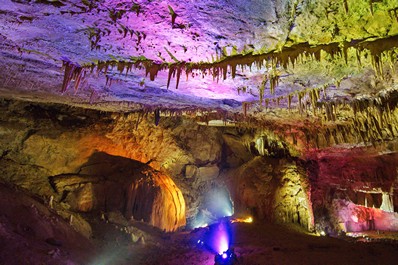 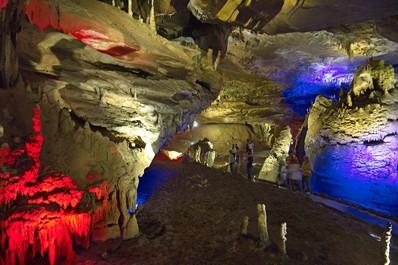 We recommend that you wear comfortable shoes when visiting the cave, as you will need to walk for about an hour and the ground can be slippery.

You may wish to bring a jacket – the temperature in the cave is a constant +14°С, while humidity varies between 96 and 98%. 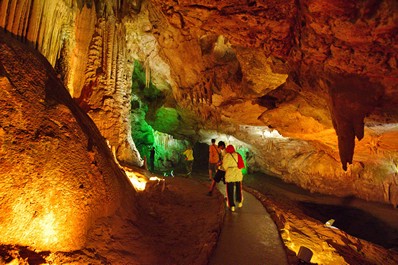 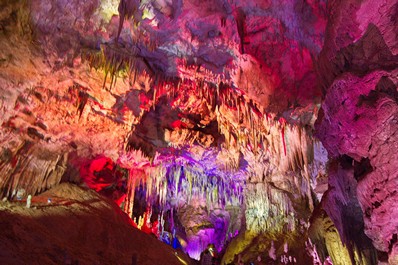 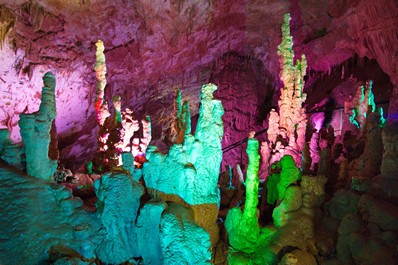 The following actions are prohibited in the cave: