Jvari monastic temple immortalized by Michael Lermontov (“Mtsyri”poem) is the most ancient cult monument constructed in the beginning of Georgian Christianity in the 6th century (585- 604). The name Jvari means “cross” in Georgian language. It explains the ancient legend which says that it was there that St. Nino of Kappadokia put the Sacred Cross symbolizing the acceptance of Christianity by Georgia. Later over the cross the Temple of the Sacred Cross was built. It is worth mentioning that Small Jvari temple was built first (lying in ruins next to the main temple), and Big Jvari was erected afterwards for the purpose of preservation of the Sacred Cross relic. According to the ancient records the Cross was open to be seen from afar and was the object of worship until the 6 th century. 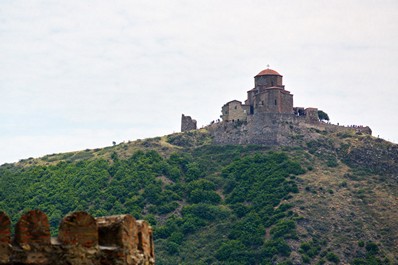 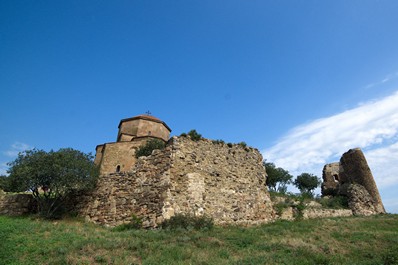 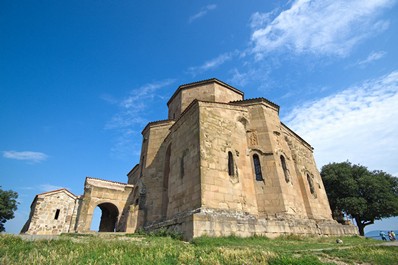 “The columns of the brought down gate, the towers, and the church arch...” – that was how Lermontov saw Jvari. Today Jvari looks the same as during the visit of Russian classic poet. The brought down stone walls with arch entrance and the temple itself seem majestic and strict. Its ascetic beauty is expressed in ideal proportions of the halls and the dome, in strict and straight lines, in smoothness of the external walls which do not bear any unnecessary decorative elements except the reliefs on their facades. Outwardly the temple looks like a big octahedral drum crowned by hexahedral cross-topped dome. Four premises adjoin the temple from two sides.

Jvari interior is no less harmonious: pure, sound and complete classics enchants with its perfection. From the inside the church is decorated by a mosaic which has survived only in fragments. In the temple's centre one can see the foundation on which the Sacred Cross brought by St. Nino of Kappadokia used to be fixed to. 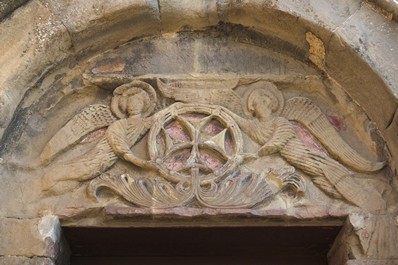 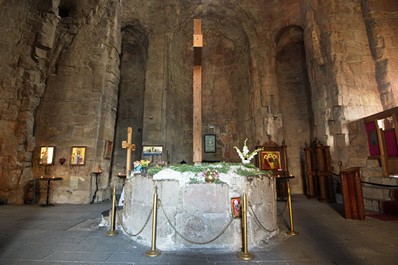 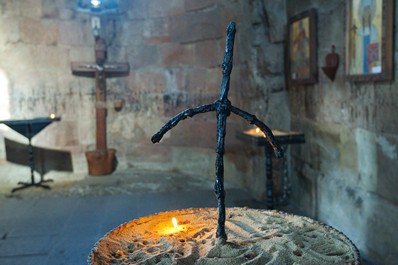 Jvari is standing on the edge of a high rock and is in wonderful harmony with the severe but extremely picturesque nature of this area. Below, at the foot noisy Kura and Aragvi, two most known rivers in Georgia, are flowing by. Right across lies the extensive panorama of Mtskheta. On the windy slopes near Jvari grows the Tree of Wishes. The pilgrims come there to fasten ribbons with the hopes that their wishes will be granted.