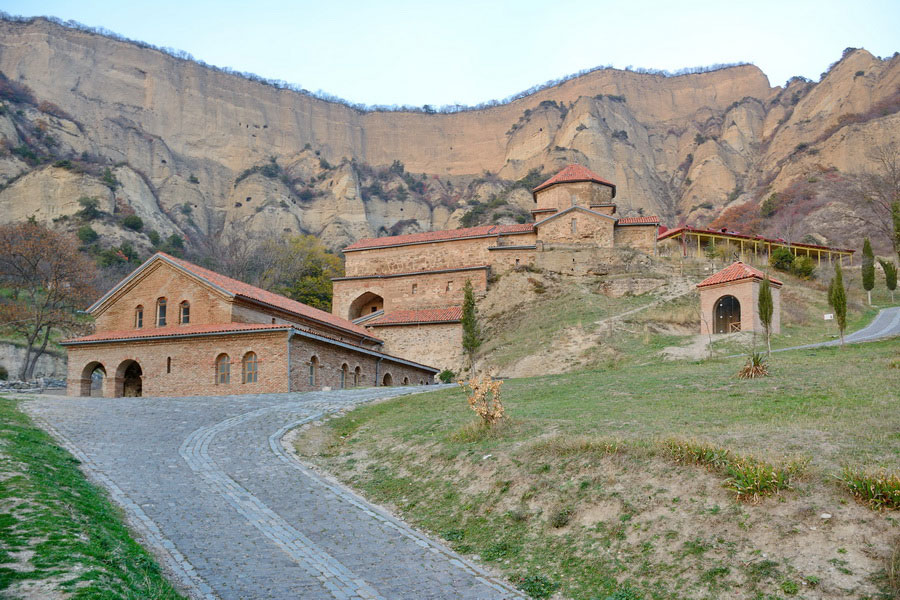 Shio-Mgvime Monastery in Mtskheta, Georgia is a must-see site for religious and historical tourists to the region. Pervaded with serenity and not yet flooded with visitors, this Orthodox complex lies in a gorgeous limestone canyon which adds shades of natural beauty to the colorful story of the beloved hermitage.

The history of Shio-Mgvime began in the 6th century when Shio, one of the 13 Assyrian fathers who traveled to the region to spread their faith, settled near Mtskheta to practice a monastic life. Shio lived out his final years as a hermit in a cave, which is why the site is now called Shio-Mgvime (Cave of Shio). As the Assyrian fathers’ contribution to the Christianization of Georgia was colossal, the places where they settled are held in high honor and preserved with great care up to this day.

Shio-Mgvime served for centuries as a Georgian cultural and literary center. During Shio’s lifetime, the number of monks in the monastery increased from 25 to 200. Shio-Mgvime remained under the direct patronage of the Catholicos-Patriarch until King David the Builder made it a royal domain in 1123 and contributed land to the complex. In return, the monks supported the king in his fight against rebellious feudal lords. The monastery acknowledged the supreme right of the king but continued to be subordinate only to the Catholicos-Patriarch.

During the 13th-18th centuries, the political and economic life of Shio-Mgvime gradually deteriorated. In the second half of the 14th century, it became the property of the Zevdginidze-Amilakhvari family, and from then until the early 19th century, Shio-Mgvime served as a crypt for this prominent family.

During the invasions of Shah Abbas in 1614-1616, Shio-Mgvime was destroyed. It was restored in 1678, but Ottoman rule in Kartli from 1723-1735 and Lesgian invasions in 1726 finally drove Shio-Mgvime to abandonment. In 1735 it was raided again, this time by Qizilbash brigands.

After Eastern Georgia was absorbed into the Russian Empire in 1801, Shio-Mgvime became a state institution of feudal seniority. From 1811-1822 it was administratively joined to Kvatakhevi Monastery and from 1822-1887 to Tbilisi Transfiguration Monastery. As the 19th century drew to a close, Shio-Mgvime was thoroughly renovated thanks to the initiative and funds of a Georgian bishop. In the 20th century, the monastery was painted, redecorated and embellished with additional buildings. Although forcibly abandoned during Soviet times, today it is an active monastery which attracts many pilgrims. 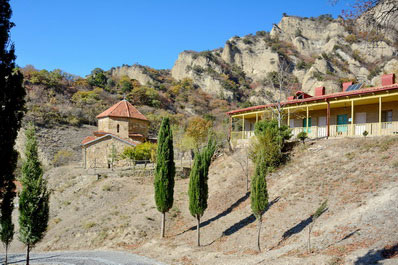 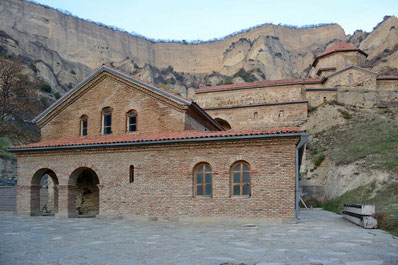 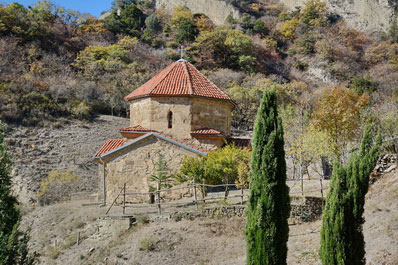 Shio-Mgvime Monastery has spawned many stories and myths. According to one legend, pigeons had been bringing food to the hermit Shio when a local hunter named Evagre spotted one of the birds and, in chasing it down, discovered Shio. After getting to know the monk, Evagre also joined the monastic life.

The Virgin Mary and John the Baptist reportedly appeared to Shio and prophesied that "the wilderness was filled with men”, a prophecy which came true in the following centuries when monastic life began to flourish in the region.

Yet another story recounts the origin of the spring at Shio-Mgvime. Water was usually hauled up by the monks from the Kura (Mtkvari) River. Once, one of the monks fell as he was returning from the river, breaking his vessel and spilling all of the water in the process. The monk started sobbing and beating his back. When Shio saw this, he comforted the monk by saying “Do not cry, for God has heard you. In the place where your tears have fallen, he will cause a spring to appear”. Shortly thereafter, the spring burst forth from the earth. 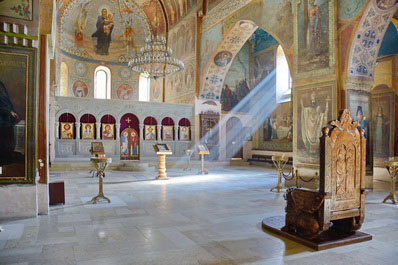 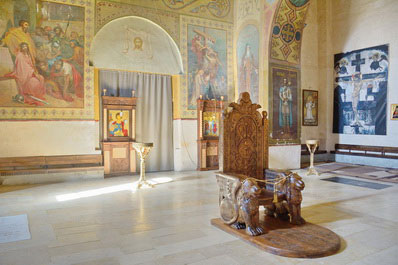 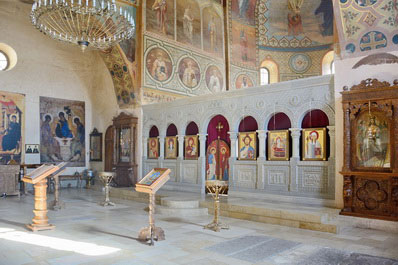 The monastic complex is quite extensive, and upon arrival you will see layers of buildings unfolding before your eyes. St. John the Baptist Church is the oldest cathedral of the monastery, while St. Mary’s Assumption Cathedral is considered the main cathedral. The complex also includes several other chapels, a belltower, refectory and cave cells.

Church of St. John the Baptist was built in 550-560 and now appears half-buried. The neck of the octagonal dome is erected in a central square which is complemented with octagonal arches, and the interior decorated with 11th-century stone iconostasis with rare ornamental figures. Despite 16th- 18th century additions, Church of St. John the Baptist has retained its original appearance.

Shio Cemetery Church, which stands to the west of St. John the Baptist Church, is a cave-well with a base of only 3x4 meters. Shio spent the final years of his life inside the cave before being buried here, and it is now the most sacred place at the monastery. In the 11th century, the head abbot built Shio Cemetery Church to coincide with the cave. It was remodeled in 1733 and again in the 20th-century, at which time its original design was lost.

St. Mary’s Assumption Cathedral and tower stands in the northeast corner of the complex. Also called Upper Church, it was built in the 11th-12th centuries by order of King David the Builder. Originally it was a domed church, but in 1668 a new chapel was erected on the foundation of the original. The new three-nave basilica church was renovated shortly thereafter and its interior plastered and painted with oil paint. Of special note is a full-body image of Bishop Alexander Okropiridze accompanied by the inscription: "All-Priest Alexandre, the Restorer of Shiomghvime Lavra". The tomb of Alexander Okropiridze is marked with a marble slab, while the tombs of one of the monastery’s renovators and his wife can be seen near the altar staircase. The tower stands near the west gate and contains a damaged inscription carved near the top of the staircase, informing us that in 1733 the complex was restored by Givi Amilakhvari.

Shio-Mgvime Monastery also includes monk’s lodgings, part of a 12th-century refectory which was rebuilt in the 16th century and a small painted chapel which also dates to the 12th century.

Situated just a one-hour drive from Tbilisi and 40-45 minutes from Mtskheta, the monastery makes an excellent getaway from busy city life. The final 12 kilometers of the drive take you along a well-paved but narrow mountainous road. We advise you to be cautious when driving and to watch for oncoming traffic. The drive itself is beautiful and filled with curves which run deep into the canyon. Evening views from the road are so mesmerizing that many wedding photos are taken here.