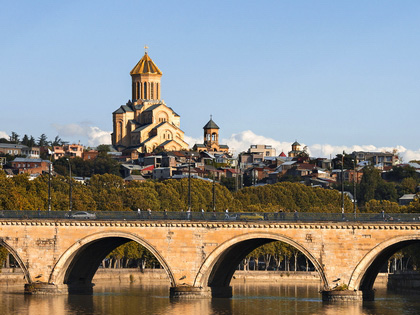 Not far from Dzhvari there is another cult monument of Christian Georgia – one of the major Orthodox Georgian temples – Svetitskhoveli Cathedral.

It was built in the 11 th century (1010-1029) on the site of the Twelve Apostles Church, the first Christian Georgian church erected in the 4 th century. There is a religious legend, connected with this church origination, about Elioz, a citizen of Mtskheta, who found the Tunic of Jesus Christ in Jerusalem. Elioz's sister – Sidonia – died as soon as she touched the tunic. She was buried wrapped in it . Soon a big tree, cedar of Lebanan, grew on Sidonia's grave. When the ruler Mirian decided to build a temple on the place where the Tunic of the God was buried the cedar was cut down. They made seven columns from the tree and began to install them in the church. Six columns were in place but the seventh was not; it was hanging in mid-air. The Baptist of Georgia, St. Nino prayed all night long and then the column “without a touch of a human hand” froze on its place and … started shedding holy ointment. The miraculous chrism cured patients of heavy illnesses. Hence the temple's name – Svetitskhoveli; in Georgian it means “the Life-Giving Pillar”. One of the greatest religious holidays of Georgia is Mtskhetoba-Svetitskhovloba is dedicated to the Life-Giving Pillar and the Tunic of the God. It is marked two times a year (on July13th and October 14th). 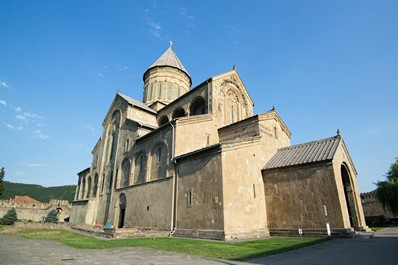 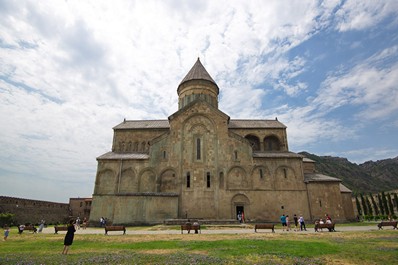 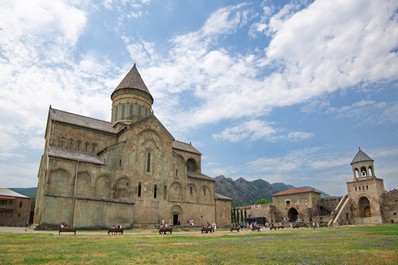 In the 11 th century Melkhisedek, the Catholicos of Georgia, began building the new patriarchal temple on the place of the old church. There is a legend connected with this building too. “To build the temple Arsukisdze, an architect, was invited. When the building was ready it turned out that the masterpiece considerably surpassed the creations of his teacher. The teacher's pride was hurt so he slandered his pupil and the architect's hand was cut off. According to an alternative version the hand of Arsukidze was cut off by the king's order so that he was not able to construct anything similar to Svetitskhoveli.” Probably the latter version is true as over one of the facade arches there is the relief with the image of a hand holding a setsquare. The inscription under the relief says: “the Hand of the servant of God Arsukidze. Remember”.

Svetitskhoveli is a grandiose cathedral of cross-dome design. The side-altars decorated with arch reliefs symmetrically depart from the high cross-shaped facade from two sides. Behind the facade as if the second tier rises the basic building of the cathedral. It is of rectangular shape and in the middle of it towers the faceted drum topped with a peaked dome with 16 windows. The temple facades are decorated with stone carving characteristic for Georgian architecture of the late 10 th - early 11 th centuries. The arches frame the windows, carved reliefs and niches. One can see the figures of flying angels; they are the fragments of the previous temple built in the 4 th century. 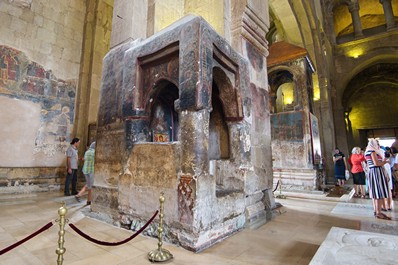 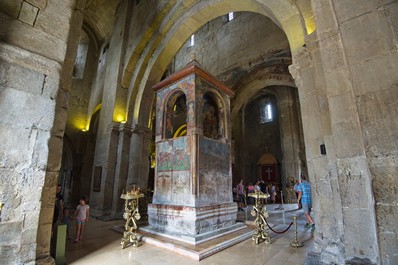 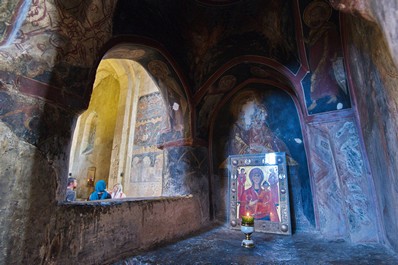 The windows ledges and frames are entirely covered with carved relief ornament which with other decorative ornaments harmoniously merges in the overall architectural and artistic image of the building.

The interior of the temple is simple and full of light. The paintings fragments which still can be seen on the temple walls were mainly done in the 16 th – 17 th centuries. The fragments of frescos depict the scenes from the legend about the Tunic of God.

Under the big arch there is the legendary “Life-Giving Pillar”.

In front of the altar there is the burial place of Georgian rulers including Vakhtang Gorgasali, the founder of Tbilisi; Irakli II, the king of Kahetia; the rulers of Bagrationi dynasty and others. 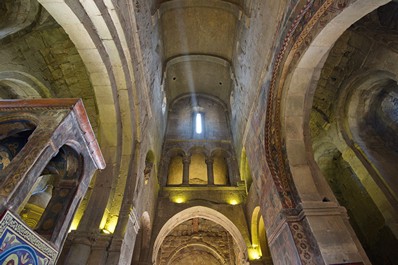 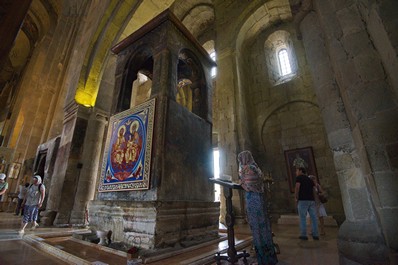 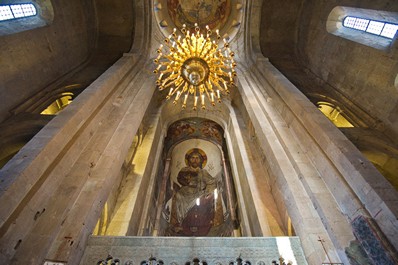 For the period of its existence Svetitskhoveli has been destroyed and restored a number of times. The most considerable reconstruction took place in the 15 th century when the current dome of the cathedral was installed and then in the 17 th century when the existing the hipped roof of the current dome was made along with repairs and the walls whitewashing. Despite this Svetitskhoveli has preserved that noble shape which Arsukidze gave to it in 1029.

Even in the Middle Ages Mitskheta was the heart of Georgian church. Since then traditionally all major church ceremonies including the enthronement of the Catholicos-Patriarch are held in Svetitskhoveli Temple.