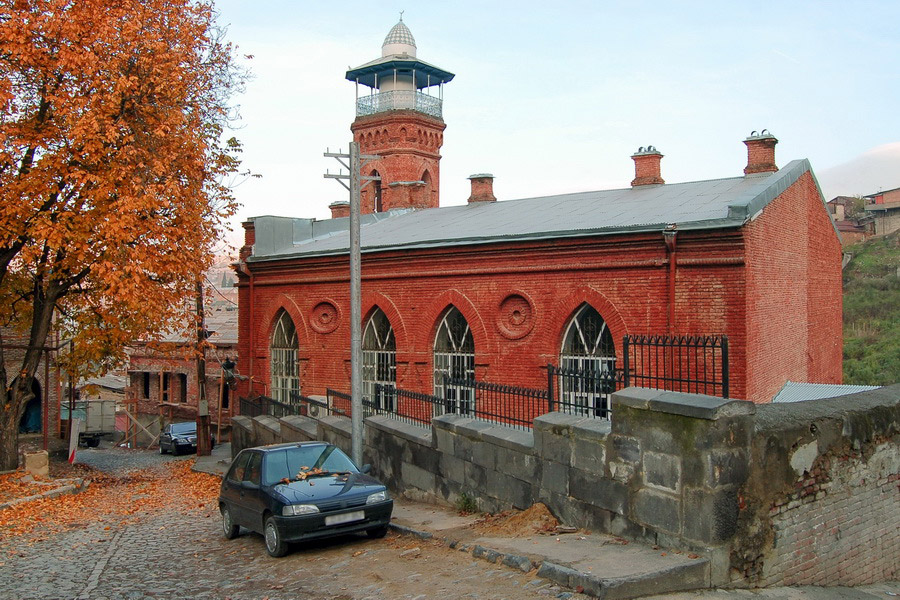 In Old Tbilisi, a unique district of Georgia’s capital, religious buildings associated with diverse faiths can be seen in close proximity to one another. Jumah Mosque in Old Tbilisi, also known as Tbilisi Mosque, is a lovely historical building which has become an integral part of the old city.

Located at the foot of Narikala Fortress at the end of Botanical Street, it is the only surviving mosque in the city. Apart from its endearing architecture, Tbilisi Mosque is known as a place where Shia and Sunni worshippers pray together in a rare show of unity. People of other faiths may also enter the Georgia mosque to admire its beautiful mosaics, which along with the many churches in the neighborhood are a must-see during your tour of the capital.

A Muslim minority first emerged in Tbilisi after the Arab conquest of the city in the second half of the 7th century. During the Middle Ages several mosques were built in Tbilisi, the largest of which was Shah Ismail Mosque. Located on the banks of the Kura River south of Maidan Square (said to have been built by Shah Ismail I of Iran in 1522-1524), the mosque was demolished in 1950 during construction of Metekhi Bridge.

In the early 1700s the Ottomans, who had long controlled Tbilisi, built a Sunni mosque at the foot of Narikala Fortress. When Tbilisi came under attack by the Shia Persian Empire in the 1740s, Nader Shah ordered the Sunni mosque dismantled. Although it was rebuilt by Italian architect Giovanni Scudieri between 1846 and 1851, this too was demolished at the end of the 19th century. In 1895, Baku millionaire Zeynalabdin Taghiyev sponsored its full restoration, dramatically altering its eastern side in the process. In 1998, major restoration works were carried out at the mosque.

Unification with monotheistic Russia in recent history has weakened the influence of Islamic Iran and Turkey in Georgia, yet the young and independent country has not forgotten its Muslim population. An official statement of the 1920 Constituent Assembly of Georgia reads: “No one should think that faith will hinder the unity of Christian and Muslim Georgians. Our strength lies in our connection. Only unity and brotherhood can bring us happiness”.

Muslims in Tbilisi today belong to both the Sunni and Shia branches of Islam, and Jumah Mosque serves both groups. Originally a curtain divided the mosque, with Sunnis worshiping on one side and Shias worshiping on the other, but ever since the curtain was removed in 1996 by the mosque’s imam, Sunnis and Shias have prayed together. Today, this unique Sunni-Shia mosque of Tbilisi remains a rare example of how two branches of one religion can share common space and coexist in peace.

Jumah Mosque in Tbilisi is built of brick and stands on a steep incline. Its design incorporates aspects of both neo-Gothic and Islamic architecture and is noted for the arched windows which line its walls. At the gate is an eight-story minaret which captures the eye from afar and appears differently depending on the direction from which it is viewed. The charming mosaic exterior and interior of Jumah Mosque attracts many tourists, making it one of the most iconic sites in Old Tbilisi.