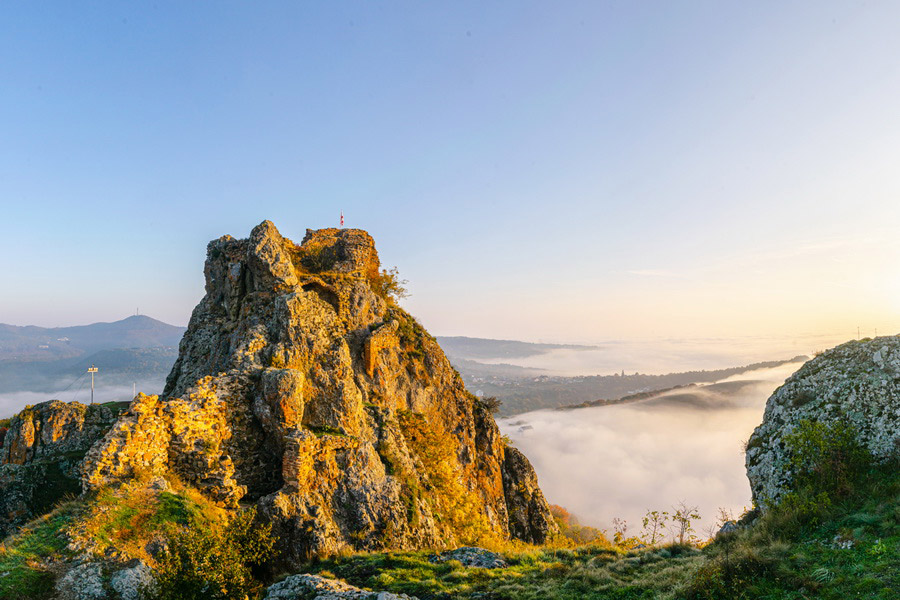 Azeula Fortress, also known as Kojori Fortress, or Agarani Fortress, is located in the mountains near the center of Tbilisi. You can get to the village of Kojori directly from the central part of the capital by city bus. A short walk first through the quiet streets of Kojori, and then through a small forest will take you to the foot of the hill. Next, you will have to make a small effort to get to its top and the walls of the fortress itself. Or rather, to what's left of it…

The history of the fortress dates back to the VIII-IX centuries. Apparently, the citadel was built to control the caravan route from Tbilisi to Trialeti and from Gardabani to Shida Kartli. In 1080, the Seljuk Turks captured the fortress, giving it the name Ker Oglu. After that, the territory passed into the possession of Emir Faldun. It was in his hands until it was recaptured in 1118 by the Georgian ruler David IV Agmashenebeli, also known as David the Builder. He, in turn, handed over the fortress to Prince Ioane Orbeli, who was a military commander and concurrently the owner of numerous lands in the Kvemo-Kartli region.

Ioane Orbeli is considered the ancestor of the Orbeliani family in Georgia. His descendants in 1177 organized an uprising against Tsar George III (the father of the famous Queen Tamar), but the rebellion was suppressed. So the fortress was again taken over by the tsar. Later Tamar herself used the fortress as her residence. And at the end of her life, being very ill, the queen spent about six months in the fortress.

The history of the fortress in the XIV-XV centuries is rather vague. It is known that it passed into the possession of the Solagashvili family. In the chronicles and historical sources of those times, the citadel begins to be called Kojris-tsikhe (Kojori Fortress). At that time, a female Kabensky monastery appeared on the territory next to the fortress, the ruins of which can now be seen next to the walls of the fortress. The church on the territory of the monastery was the tomb of the Solagashvili family.

In the XVII century, a royal palace appeared next to the fortress. It was built by Tsar Rostom, who ascended the throne in 1633. The palace existed and was completed even after, under other tsars. The last mention of it dates back to the XVIII century. Now there is no trace of the royal palace. There are also no hints of buildings that once existed, which undoubtedly were. It is believed that the palace at the fortress was an important part of political life; destinies were decided, and decisions were made here. The reasons for the disappearance of the palace are not known for certain.

Another interesting fact in the history of the fortress is connected with the battle for Tbilisi, which took place in 1921 between the Georgian army and the troops of the Red Army. The mountainous terrain played into the hands of the Georgians and on the day of the main battles, all the attacks of the "reds" were repulsed, and the enemy was seriously injured.

To get inside the citadel, you will first have to walk along a narrow path running between two huge boulders. This is followed by a climb up a metal ladder going up under a serious slope. On hot sunny summer days, you should be prepared for the fact that the railing can get very hot. A little more climbing – and here you are already at the famous cross, from which stunning views of the whole neighborhood open. In good weather, the panorama from the walls of the Kojori fortress is really a worthwhile reason to come here and climb higher and higher.

Kojris-tsikhe is located on Mount Azeula (hence the alternative name of the citadel) at an altitude of 1340 meters. A 360-degree view opens from the walls of the fortress. It was this fact that determined the strategic purpose of the stronghold in previous centuries. The best place to monitor a potential threat! Kojris-tsikhe is important for Georgian history. In addition, this is a great place where you can see the fascinating views of the mountain valleys stretching into the distance. Being in Tbilisi, don't miss this place!

How to get there