Martkopi Nunnery near Tbilisi, located in the historical village of Martkopi approximately 30 kilometers from the capital, stands as a living reminder of the nation’s spiritual history and political battles.

The building now housing the nunnery was first bought in 1980 by the Catholicos-Patriarch of All Georgia, Ilia II, as a summer residence. Ilia II took part in the gardening and upkeep himself, and upon entering the premises today you can see 40-year-old Cupressus trees which were planted by him. The patriarch spent a lot of time at his Martkopi residence, where he would receive guests from around the world and remain in close contact with the local population, who still refer to Ilia II Shiolashvili's house as a monastery.

The Catholicos-Patriarch of All Georgia erected a white marble statue of St. George atop a nearby mountain that overlooked his home. He would often return to the niche to pray, a practice which the people began to imitate and which did not go unnoticed by the Soviet regime. They asked the patriarch to take down the statue and confine his prayers to his private residence. After refusing to submit, the Kremlin ordered local authorities to remove the niche. Although this caused great sorrow among the people, they were comforted by the words of their spiritual leader: "It is true that the niche no longer stands here, but we will build a church here in the future. 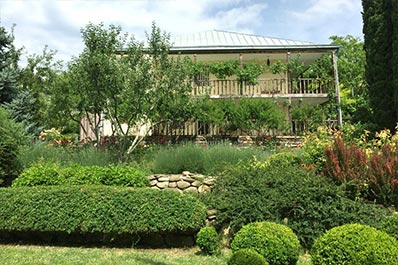 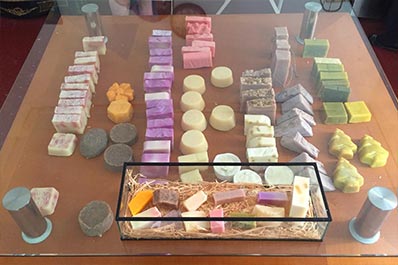 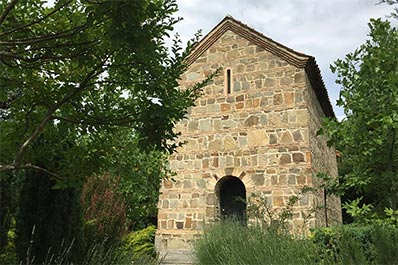 In 1992, after the country of Georgia gained independence from the Soviet Union, Ilia II established a nunnery at his former residence and named it after the icon of the All-Holy Mother of God of Iberia. In 1994, a small church dedicated to St. George was built in the courtyard. The mountain overlooking the convent was named by Ilia II as St. George's Mountain and in fulfillment of his promise, in 2015 a church (also called St. George’s Church) was built here under his directive and blessing.

Eight nuns, whose day begins with 4am prayers, reside in the abbey. Along with gardening and courtyard maintenance, the nuns stay occupied with knitting socks, weaving rugs and making delicious chocolates from scratch with all-natural ingredients. The convent also produces handmade soaps with different ingredients, such as green tea, honey and lavender, that are suitable for every skin type. A small shop at the entrance of the nunnery sells all of these products, and payment via credit card is also accepted.

Today, the nunnery remains open to visitors and is a great stopping point for tourists hiking near Tbilisi. Guests may shop at the giftshop, see the two churches and visit the abbey. Come find peace in the beautiful courtyard, have a prayer time or enjoy a sunset view from St. George Church, which is visible from almost any point in the village.

When visiting the region, be sure to stop at Martkopi Nunnery near Tbilisi.