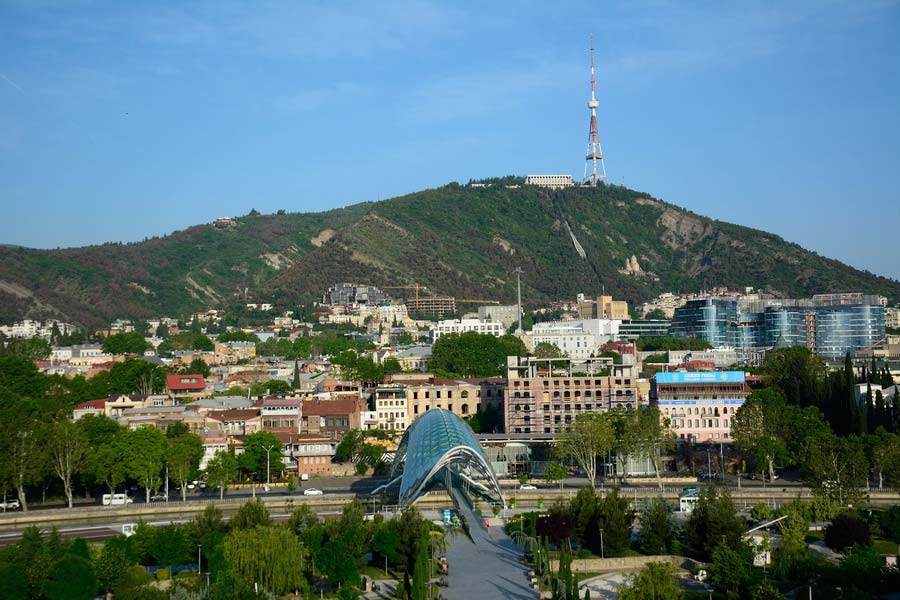 Mount Mtatsminda, also called the “Holy Mountain”, is the highest point in Tbilisi and offers excellent views of the entire city. Both tourists and locals enjoy visiting the mountain, which is not only a natural attraction and an entertainment venue, but also a holy place. On top of Mount Mtatsminda there is an amusement park with various attractions, and a famous restaurant. The mountain also hosts the church of St. David of Gareja and a Pantheon (necropolis), which is an interesting cultural and historical site.

Mount Mtatsminda is about 740m high. Hiking to the top is not easy, so we recommend taking the funicular or public transport (bus number 124). However, the descent can be done on foot along a specially paved path. On the way, you’ll come across several small observation platforms that offer excellent views.

The famous amusement park on top of the mountain has a children’s zone, a family recreation zone, and an extreme zone. Families, in particular, can spend more than an hour here.

Each zone includes various rides and attractions. The children's zone offers attractions for children between 2 and 7 years old, such as bumper cars, the “Little Pirates” roller coaster, a water playground, and a merry-go-round (carousel). In the family recreation zone, you’ll find the “Crazy Raft” (where you’ll feel like a hero of an adventure film), and the “Ghost Castle”, as well as shooting galleries, video games, trampolines, and much more. You can also take a ride on the toy train. Adrenaline lovers will enjoy the roller coaster, the water rafting ride, and the “Octopus”, which revolves eight times per minute in multiple directions.

Mount Mtatsminda’s restaurant, now part of the Funicular Restaurant Complex, is considered one of the best restaurants in Tbilisi and is famous throughout Georgia. The fresh mountain air and magnificent views are a bonus to a hearty lunch or a delicious dinner. The best time to visit the restaurant’s observation deck is from sunset onwards, when Tbilisi is lit up by thousands of lights and visitors can watch city life from above.

The restaurant is housed in a magnificent 1938 building and has two floors, with different types of cuisine. There is also a patisserie where you can enjoy fresh pastries. In one of the halls on the second floor there is a painting by Konstantin Ignatov, which depicts the everyday lives of ordinary people and their festivals. The artist dedicated the painting to his colleague Niko Pirosmani, whom he painted symbolically in the centre.

The symbol of Mount Mtatsminda is the Tbilisi TV tower, which is called Andza. The tower is used for various purposes, including broadcasting TV and radio channels and installing cellular antennas. It has an unusual triangular shape and rises more than 270m above the ground on the top of the mountain.

Next to the TV tower is the ferris wheel, which has also become a symbol Mount Mtatsminda and of Tbilisi itself. The wheel is part of the amusement park.

The funicular allows visitors to reach the restaurant and amusement park, as well as the Pantheon. The is one of Tbilisi’s main cultural and historical attractions, and a ride on it is generally considered an experience not to be missed. The route has three stations: lower, middle (for the Pantheon), and upper (for the restaurant and amusement park). To use the funicular, you need to buy a transport card.

Tbilisi’s funicular has a rich and interesting history. In 1900, the city government signed a contract with a Belgian company, according to which the company completely rebuilt the funicular and used it for 45 years, after which time it became the city’s property. Similar projects appeared in Odessa and Kiev at around the same time. In Soviet times, there was also a cable car that transported visitors up Mount Mtatsminda. Its former station is now located next to the Rustaveli metro station.

Another of Mtatsminda’s interesting historical sites is the Pantheon, where several famous people from Georgia, the Soviet Union, and the Russian Empire are buried. The Pantheon appeared near the cave of David Gareji, who was one of the Assyrian Christian preachers that came to Georgia in the 6th century. A church was built near the cave in the 19th century. In 1829, Russian writer Alexander Griboyedov was buried near the church walls, followed later by other famous people. Exactly 100 years later the Pantheon was officially established. Near the church and in the David Gareji Cave, you can now find springs with clean and, local people believe, healing, water.

There are four important places in the centre of Tbilisi called “Mtatsminda”: the mountain, the pantheon, the street that leads to the top of the mountain, and the area up to the Kura River.

Mount Mtatsminda is undoubtedly an interesting place to visit. In addition to offering stunning views of the city, it provides visitors with an opportunity to learn about its history, relax in a shady park, enjoy high-quality Georgian dishes in the famous restaurant, and just have fun, enjoying the fresh air and the warm Tbilisi sun.