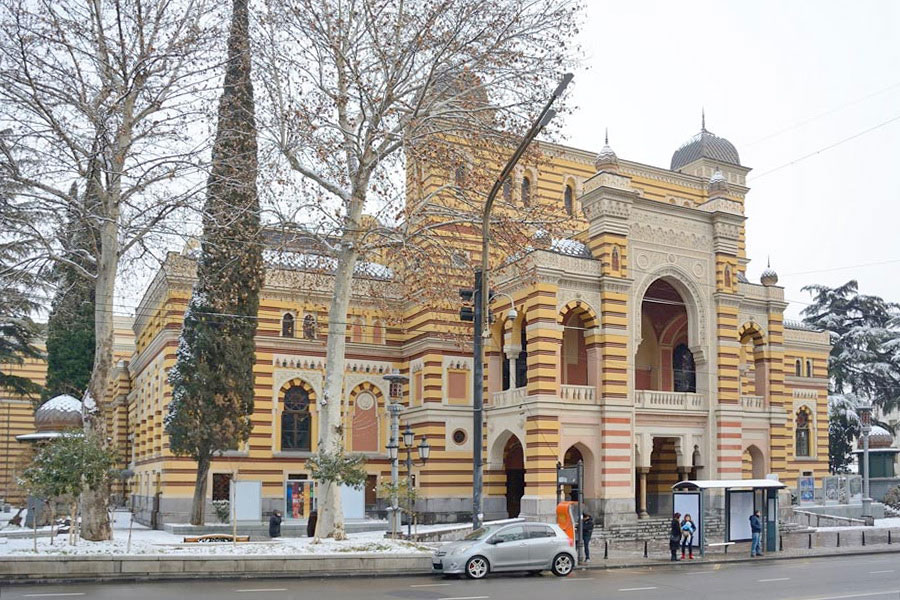 A beautiful building on the Rustaveli Avenue constructed in Mauritian style is the Georgian opera and ballet theatre named after Z. Paliashvili. It was initiated by the governor Mikhail Vorontsov after Georgia had joined Russian Empire. In this way a smart politician and governor aimed at prepossessing population of Tbilisi, who was not very positive towards him. Erection of the theatre began on 15 April 1847 on the Erivan square that today called the Square of Freedom. The author of the project was a famous architect Antonio Scudieri, and the painting of the new theatre was given to a Russian knyaz (duke) and artist Grigoriy Gagarin.

Construction of the Opera and Ballet Theater was completed three years later. It immediately became a favorite place of citizens and the heart of Tbilisi cultural life. Unusual appearance and luxurious interior decoration was a competitive edge of the theater among others. The urban elite society was invited to the opening of the theater. After one of the local newspapers published enthusiastic review saying that the new theater was the most elegant and presentable building that could only be created by humanity. The goal of Vorontsov was achieved.

Theatre season in the new building was opened on 9 November 1851 with the opera “Lucia di Lammermoor” that was considered the pinnacle of creativity of a legendary Italian composer Gaetano Donizetti. Spectators were so delighted with the play that celebrated its success with actors on banks of Kura all the night. Since then opera in Tbilisi had been gaining popularity. More and more national theatre companies and artists from Europe would perform there. This cultural idyll was broken by fire on 11 October 1874. The disaster destroyed the building of the theatre, as well as all costumes and decoration. In 1896, opera and ballet theatre was reconstructed. The season in the restored theatre began with the opera named “A life for the Tsar” (“Ivan Susanin”) by Glinka.

There were many famous figures of culture and art working in the Tbilisi opera and ballet theatre. The most famous of them was composer Zakhariy Paliashvili, one of the most influential and significant figures of the Georgian classical music, the author of opera “Abesalom and Eteri” (1919) and “Daisi” (1923). That was his name given to the theatre in 1937. Among other prominent “offsprings” of the Tbilisi opera and ballet theatre was the brother of Zakhariy, conductor Ivan Paliashvili, more known under the pseudonym Paliev. Besides, Tbilisi theatre gave a start to Nino Ramishvili and Ilya Sukhishvili, who later founded the Ensemble of national dance of Georgia.

The theatre fell into decay in the 20th century, as the state did not have enough funds to keep it. However, in 2003 the attitude towards the theatre changed completely, the state took over sponsorship and new costumes and decorations appeared there.

Today the opera and ballet theatre on the Rustaveli Avenue continues to remain the center of cultural life of the Georgian capital. The repertoire of the theater includes legendary performances such as “Swan Lake”, “Giselle”, “Nut-cracker”, “Don-Quixote”, “Romeo and Juliet”, “Midsummer night’s dream” and many others.