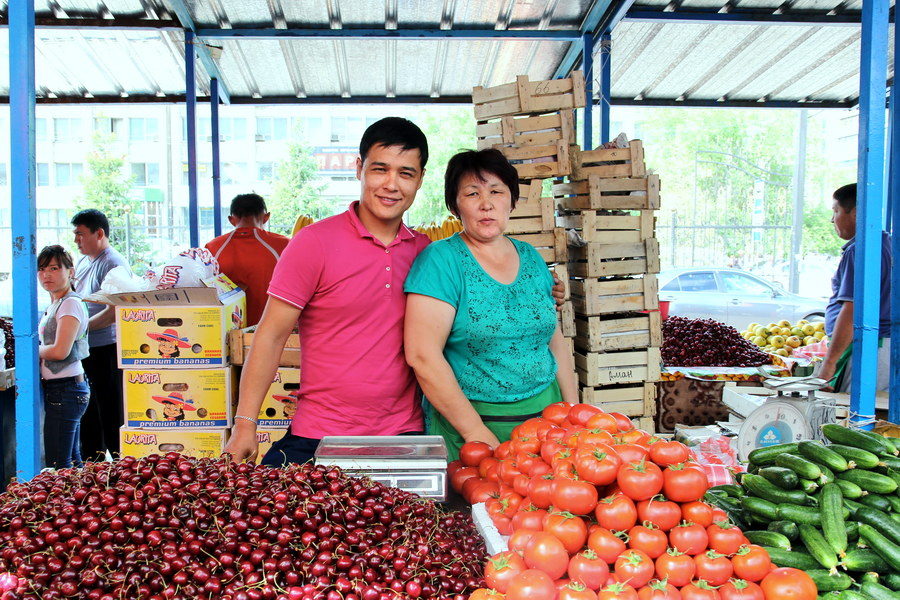 Today Green bazaar (Zelyony bazaar or Green market) in Almaty on the crossroad of Zenkov and Jybek Joly streets looks like a usual oriental market where you can purchase everything: starting with meat, spices and fruits up to textile and furniture. Anyone should bargain here, vendors praise their goods and try to treat the customers; and customers, in their turn, prefer to choose and socialize; life is on. For those tired and hungry during shopping, there are places to rest, drink tea and have a snack. Green bazaar amazes some with its abundance of goods and colorful atmosphere of the East, and some remain indifferent. Tastes differ.

Green bazaar is inseparable part of Almaty tours for its rich history too. The first prototype of the trade center appeared on its current place more than hundred years ago, and since then it has remained an important central trade point of the entire Almaty. In 1875, according to the order of Rafikov, an influential merchant from Semipalatinsk, there was built a Guest Yard. Almaty then was named Verniy, and Vernenskiy Guest Yard served as a haunting place for traveling merchants and caravans; local vendors opened market stalls there. The Guest Yard consisted of two medium pavilions located along the Trade Street. As today, customers had a big choice of fresh fruits, vegetables and grains there. Rare things like Chinese tea could also be found. The stalls were filled with raw materials, household items and many others. Like current taxi-drivers, there were coachmen standing at the market ready to drop off.

In 1887, Verniy experienced a terrible earthquake, as the result, the city was harshly destroyed. Minor earthquakes would often take place there, and residents were accustomed to it, but the events of 1887 turned out to be a catastrophe. Almost nothing was left from the Guest House. City authorities started organizing bazaars focusing on one type of goods: thus leading to hay, vegetable and cattle markets. However, after the revolution, they also faced difficulties, as private trade was not encouraged and strongly suppressed.

Trade flourished with the start of “kolkhoz” collective farming system that needed to push off agricultural products. In 1927, the ruined Guest Yard was reconstructed anew and received a new name – Central Farm Market, though it was popularly known as simply Zelyony (green) bazaar. In the 40’s, the bazaar was just wooden stalls under tents, with the goods sold out by midday. Apart from that, one could purchase cattle there too. The top sale was always the Almaty aport kind of apples.
During the war, prices increased rapidly and not everyone could afford such a luxury like doing shopping at Green bazaar.

Time passed and the bazaar practically did not change. This lasted until the mid of the 70’s. Then wooden stalls were pulled down and a covered building in the style of the Soviet constructivism came into its place. Green bazaar was reborn and obtained its current look. The head architect of the project was Mark Pavlov. The bazaar was projected as a construction of several levels. The main pavilion was for 800 places, the summer market- for 200, and the car park – for 400 places. Seismic situation of the region was also considered during the construction. It was one of the most technological and modern bazaars in that period.

Today Green bazaar is a popular place among tourists and often included into different excursion programs as a complete attraction of Almaty. Travelers are attracted with oriental exotics of the market, opportunity to buy different sweets and souvenirs, socialize with kind-hearted and welcoming vendors and learn more about Kazakh everyday life.