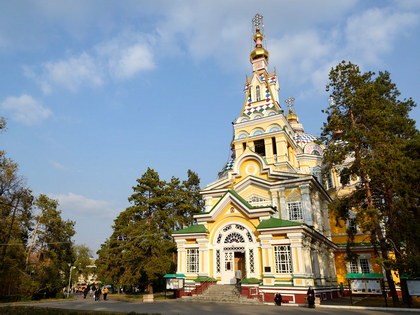 Book Almaty Layover Tour to explore the largest and the most ethnically diverse city, transport and financial hub of Kazakhstan. You will explore the oldest building of the city, oriental bazaar, mosques, squares, Medeo gorge in Almaty vicinity and many more.

The Park of 28 Panfilov Guardsmen is the most popular amusement park in Almaty. It was founded in the 70-s of the XIX century on the place of a cossack village cemetery, and originally named as Starokladbischensky Park (Old Cemetery Park). The park is a green area of 18 hectares, divided by straight paths and alleys, surrounded with mixed deciduous grove of perennial oaks, elms, aspens, maples, poplars, pines and firs.

Over the years of its existence, the park changed its name not once or twice, until 1942, when it was finally renamed in honor of Panfilov soldiers of the 1075 regiment of the312th riffle division, who having small forces were able to blunt the German attack at the approaches to Moscow in November 1941.

History says that the regiment was formed manly from Almaty and Bishkek natives shortly after the beginning of the war. They were young inexperienced soldiers, who had not even done their military service and who found themselves at the forefront of Volokolamsk direction late in 1941. 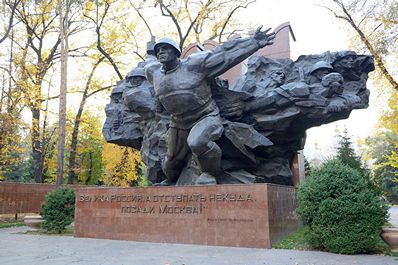 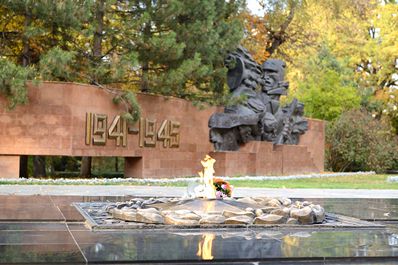 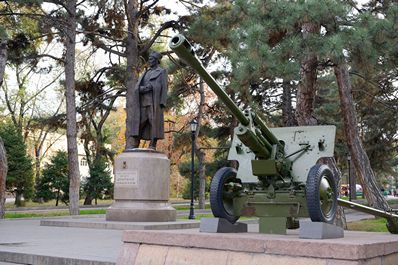 It cost them incredible sacrifices and efforts to confront the enemy, five times outnumbering and outgunning them, more than a month. The resistance of the 316th infantry division on November 16, 1941, when a few dozens of soldiers were blunting an attack of German tank column for 4 hours and managed to destroy 18 of the 50 tanks at that, was memorized in the Soviet historical records as a 28 Panfilov's guardsmen feat.

The last words of Klochkov, the division political commissar “Great Russia, but nowhere to retreat. Moscow is behind us”, were included in the history books in all Soviet educational institutions. Well, the Panfilov’s division managed to face the attacks of the enemy on their way to the capital, but almost the whole division died.

The memory of the Panfilov solders’ heroism was immortalized in granite triptych, timed to the 30th anniversary of the Victory and erected in the central part of the park. Its left high relief – “The Oath” is dedicated to the young Kazakh warriors who fought for the Soviet power, the central part of the monument – “The Feat” reflects the international images of Panfilov’s guardsmen, as a symbol of the heroism of Soviet soldiers during World War II, and the right part of the composition – “The Blowing the Glory" embodies the victory and triumph of life.

The Memorial of Military Glory has obelisks with the names of the 28 Panfilov’s heroes, who held out in an unequal battle with the Germans, and with an eternal flame in its center. On holidays Almaty citizens lay flowers and wreaths to its foot in respect for those killed in the Second World War of 1941-1945.

Visitors of the park can also see other memorials installed there: a bust of Ivan Panfilov, commander of the legendary 312th rifle division, as well as a monument to the soldiers killed in the Afghan war and other monuments. But, the park is famous not only for the monuments to war heroes. The territory of the Park of 28 Panfilov Guardsmen  includes several historical buildings dated back to early and mid-XX century, such as: Ascension Cathedral, erected without a single nail, the Museum of Folk Musical Instruments, Officers’ Club - each of them is associated with a separate equally interesting story.