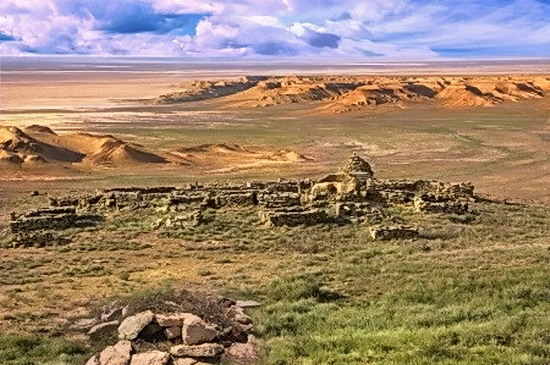 It is located in the northwest of the republic. Huge natural resources, the advanta geous geographic location, developed economic links with many Russian cities and other countries create favorable conditions for successful development of external economic activity.

Western Kazakhstan includes Atirau, Mangistau and Aktyubinsk Oblasts. The region is situated in the utmost west and south-west of the Republic. Its vast territory stretches for 1200 km from the north to the south and for 1300 km from the west to the east.

The main rivers are the Ural, the Emba. The largest lakes are Inder, Aralsor, Kamis-Samarskiye. The most important role is played by the Caspian Sea. Oil production has been developing for 100 years in this region. Atirau is the centre for the production and conservation of the black caviar. The climate here is sharply continental, dry.

The Great Silk Road passed through the whole territory of Mangistau for 2000 years. Now it has become a very interesting tourist route. The presence of the attractive landscapes, along with a great diversity of fauna of the Usturt Reserve, the unique historical and cultural as well as natural monuments in which Mangistau abounds, the picturesque places of the Caspian area represent a considerable interest for a potential tourist.

Aktyube Region is one of the most significant indus trial areas of Kazakhstan. It occupies the area of ap proximately 300,000 sq. km. Aktyube Region bor ders on Russia in the north and Uzbekistan in the south. It is interesting that in the east and west three Kazakhsta ni regions on each side adjoin this area. In the east these are Kostanai, Karaganda and Kyzylorda Regions; in the west - Atyrau, Mangistau and West Kazakhstan Regions.

Atyrau Region is the kingdom of steep 400-m slopes (chinks) and absolutely white, perfectly shaped stone spheres of about 2 m in diameter. This reserved land represents a limestone plateau, once the bottom of a prehistoric ocean. The Caspian and Aral seas are its remains. Arid steppe zone meets with flow-lands of the Ural river (Zhaik in Kazakh) which here and there resembles the swamps of Flori da. This is truly a heaven for various waterfowl. Only air cushion watercraft are permitted here. Flocks of swans, ducks and geese sweep over the heads of astonished tourists who are struck by the greatness of their number.

The Treasure Peninsula.This is how people call one of the richest areas of Kazakhstan - Mangistau Region. This land is rich in oil, gas, construction materials, various ores and minerals. It is also true that the present-day Mangistau is called the land of tourism and recreation resources with rich cultural heritage.

Ancient burial sites were found to the north of Kizan, on the bank of the Dead Kultuk. They go back as far as IV-V centuries BC. Experts acknowledge that this discovery may convey new data about ancient peoples of the Sako-Massaget period who used to live in this area.

Situated in 18 km from Shetpe, Akmish area enchants tourists not only with its beauty but also with its historical sites of ancient Kizil-Kala (which stands for a ‘red town' in Kazakh). Three kilometres from Akmishsay will bring tourists to the picturesque canyons Samal and Sazanbay. Hanga-Baba Tract, another attractive place, is situated in 30 km from Fort-Shevchenko. Here one can find spring water, hawthorn and blackberry bushes, mulberry , elm and poplar groves. Ancient Hanga-Baba Necropolis with a mosque is also situated here.