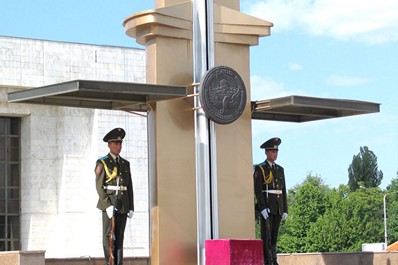 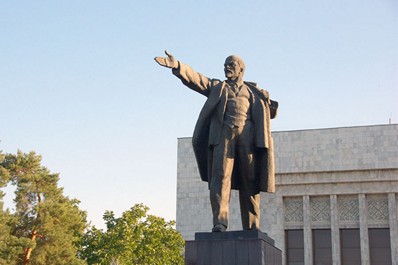 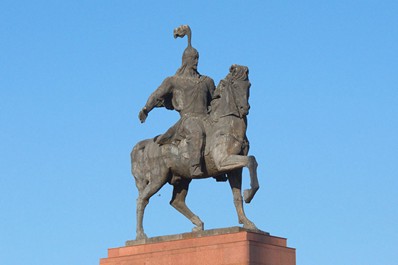 Aikol Manas (Ala-Too Square): One of the biggest and most prominent statues of Manas, right in Bishkek’s central square. In Soviet times, Lenin occupied this space; today, Lenin stands behind the Historical Museum.

Alley of Heroes of the Second World War (Molodaya Gvardiya): Created in 1975 in honor of the 30th anniversary of the victory in World War II, this park is a long line busts honoring those who died in the war.

Bubusara Beishenalieva (Theater Square): Kyrgyzstan’s prima ballerina, she danced with the Bolshoi Theater and was a soloist at the Kyrgyz Opera and Ballet Theater.

Gennadiy Pavliuk (Sovietskaya): A memorial to Pavliuk and other journalists who fought for freedom.

Kurmanjan Datka (Oak Park): This sculpture, raised in 2004, stands in the place that was once occupied by Lenin, Dzerzhinsky, and Erkindik.

Lenin (Old Square): This statue once stood in Oak Park, and for many years was in front of the Historical Museum on Ala-Too Square.

Manas Sculptural Complex (Philharmonic): The largest statue in front of the National Philharmonic is Manas on his horse defeating a dragon. Next to Manas are his wife, Kanykei, and spiritual advisor, Bakai. Along the edges of the square are famous manaschy, those who knew and recited the Epic of Manas.

Martyrs of the Revolution (Sovietskaya - Prospect Chuy): Dedicated in 1978, this monument honors those who gave their lives for a better future. The largest statue is a woman, modeled after Urkuya Salieva (1910-1934), who was an early socialist organizer.

Memorial for the Red Guards (Oak Park): This granite obelisk has the names of 43 Red Guards who died defending the Soviet Union.

Monument to Those Who Died in the Events of 2002 and 2010 (Prospect Chuy): This monument is made of two large stones, one black and one white, with a group of people pushing the black stone away from the white. This monument is dedicated to those who gave their lives in Aksy in 2002 and in the revolution in 2010 for a better future for Kyrgyzstan.

Togolok Moldo (Togolok Moldo Square): This bust was carved in 1963 by Olga Manuilova, who went on to carve several famous statues in Bishkek, and whose house is now a museum open to the public.

Victory Park (Victory Square): Three large arches convene to create the image of a yurt over the Eternal Flame. The largest sculpture is a woman who waits for a son or husband who will never return from the war. Other sculptures in the same park are dedicated to those who died and to the cost of war.