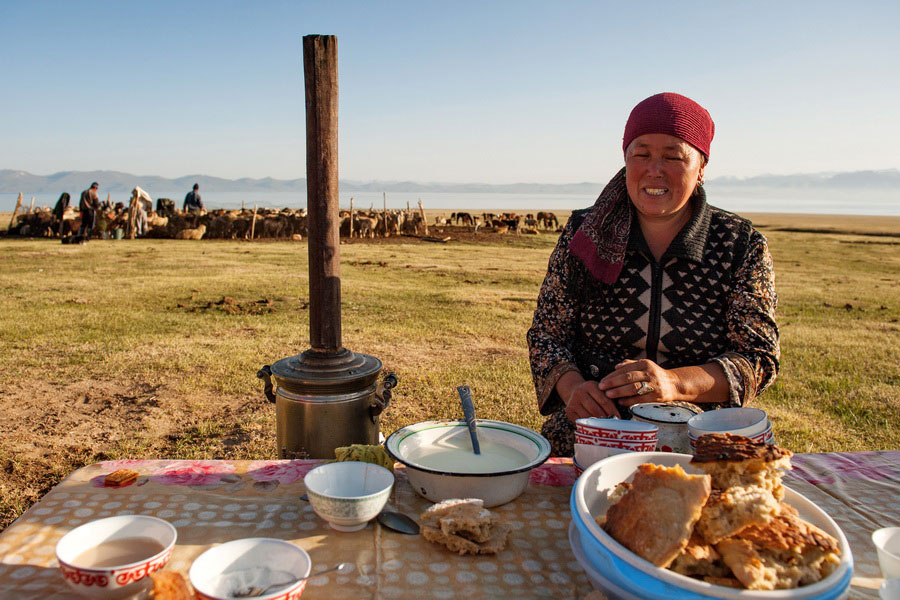 Tea and Coffee: Tea, both black and green, is common and comes in various forms. In the north, it is more common that the tea is made strong and mixed with hot water when served, but in the south it is poured directly from the pot. Don’t be surprised if you see the host pour the first couple cups back into the pot - this is to mix up the tea and make sure that it is evenly brewed. Tea may be served in a small bowl rather than in a teacup. Coffee is most likely to be instant, though some places in Bishkek are becoming master coffee roasters.

Arak: Vodka (arak in Kyrgyz) is the most common and popular form of hard alcohol. Watch out for samagon, or homemade vodka. Toasts are common, and once they start, it’s hard to decline a drink. Many Russians down the whole shot at once, but sometimes people will only drink half the glass.

Balsaam: Sometimes known as arashan, this drink is made from a variety of local herbs and spices. Slightly alcoholic, it is mixed with coffee, tea, or even vodka, and is claimed to be therapeutic for treating colds, coughs, and other ailments.

Chalap: A traditional drink made from dissolved kurut, can be found with sidewalk vendors selling shoro and Maksim.

Cognac: Kyrgyz Cognac is the local brand. It comes in several varieties (including aged for three, five or seven years), and is quite good.

Wine: Kyrgyzstan does grow grapes and produce wine, though the result is fairly sweet and not always up to visitors’ standards.

Beer: Imported beers are available, as are local brands such as Arpa and Jivoe. There is now the beginning of a craft beer market, with some places making their own signature brews.

Kumis or Kymyz : Fermented mare’s milk, an acquired taste. Kumis is sold on roadsides in the summer, though the best kumis is bought from the herders themselves in the more remote mountain areas. Refusing kumis can be seen as rude. The traditional way of making kumis is for mare’s milk to be stored in animal skins which have been cleaned out and smoked over pine branches, giving the drink a special smell and taste. One third of an older batch is mixed with a new batch and allowed to ferment in the warmth of a yurt. It is then churned and beaten with a wooden stick, and becomes slightly alcoholic. In the 1840s, Russian doctors discovered that kumis had curative properties and used it for treating tuberculosis, anemia, chronic lung diseases, gynecological problems, and skin diseases. Some 16 special sanatoriums were established, which treated patients with fresh air, exercise, and kumis. These sanatoriums served a number of famous people, including members of the Russian royal family, Lev Tolstoy, Maxim Gorky, and even a member of British Parliament, who made the journey to Central Asia especially to undergo the treatment. Unfortunately, traditional kumis can only be stored up to three days, so production is limited to the mare’s milking season.

Maksim: Shoro is a brand name of this drink, which is a wheat based drink that is popular in the summer. Barrels of Shoro and Maksim can be found on every street corner in cities.

Airan: Similar to kefir, this is a milk drink that resembles yogurt.