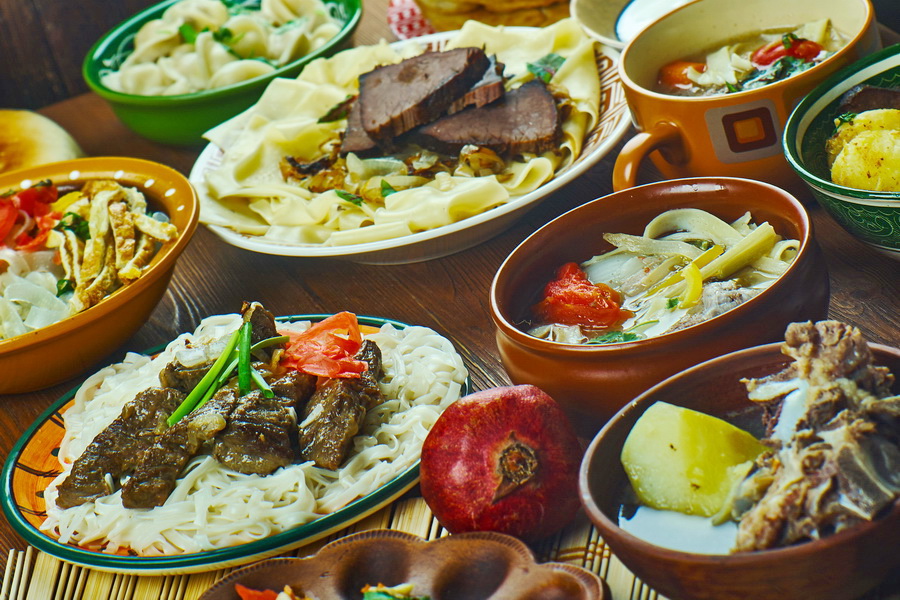 Modern Kyrgyzstan food is a conglomerate of recipes passed down from nomadic ancestors and meals adopted from neighboring peoples.

Historically, the strict patriarchal hierarchy of the Kyrgyz family was apparent even during meals. The most honorable seat was opposite the entrance to the yurt (nomadic tent) and was occupied by the eldest man in the family, called an aksakal (white beard). The aksakal would only relinquish this seat if guests came. To his right sat his sons and to his left his eldest wife, called a baibiche. Next to her sat her daughters, near whom were places for the daughters-in-law. The youngest wife of the aksakal would sit by the dinner pot, dishing up the meat and passing it to the wife of the youngest son, who in turn divided the food amongst the family members.

Food in Kyrgyzstan traditionally consisted of meat and dairy products, yet under the influence of regional sedentary cultures the variety of local dishes increased significantly. Today almost every region of Kyrgyzstan offers special foods. Karakol’s ashlyam-fu noodle dish is considered the best, not only in the country but throughout the entire post-Soviet world. Almost half of the inhabitants of Osh are Uzbek, so pilaf, samsas and shashlik are most delicious here. True to its name, the meat and noodle dish called naryn tastes best in the city of Naryn.

Kyrgyzstan food is served at a low table called a dostorkhan: "dostor" means friends and "khan" means ruler. Thus, the dostorkhan is a table at which friends and guests gather, with the seat of honor occupied by the man of the house or the honored guest. 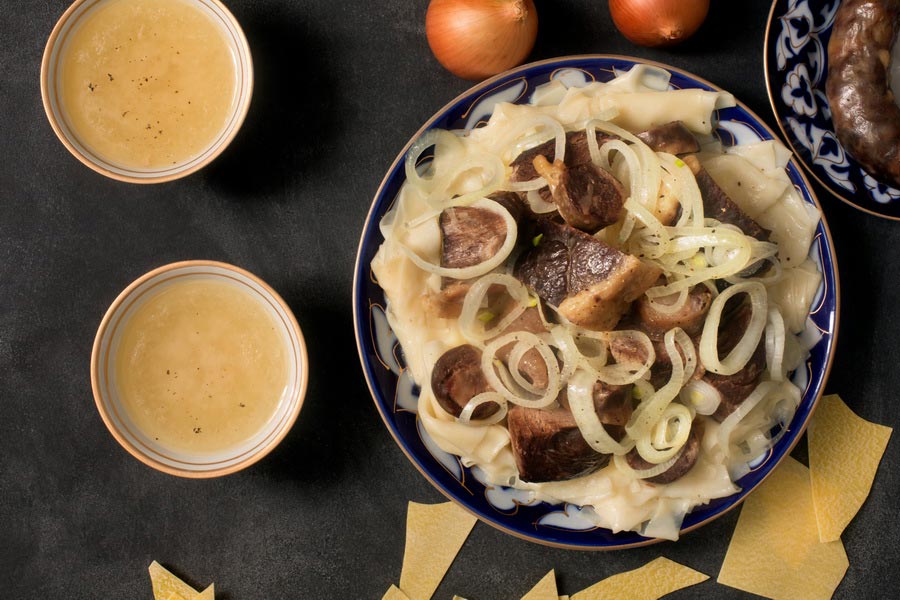 Lamb, horse meat and beef are all very popular in Kyrgyzstan. Poultry and fish dishes can be found but are not traditional dishes.

Kyrgyz love a dish called kuurdak, which is essentially pieces of meat fried with onions, and hot-top, boiled chunks of dough eaten with fried meat or liver and vegetables.

Shishkebek is a centuries-old shish kebab recipe which uses lamb or beef liver. In modern Kyrgyz cuisine it may also be prepared with meat.

Chuchuk is a horse sausage with rib fat. This delicacy is usually served 2-3 pieces at a time, but in some regions the entire dish is placed in front of a distinguished guest. Other popular Kyrgyz sausage dishes include byzhy, a boiled, peeled lamb intestine stuffed with minced meat, liver, blood, rice, flour and spices; and boiled and braided lamb casings called zhorgom.

Kerchoo is a lamb brisket cooked on charcoal, and zhaa boyrok a steamed and pickled lamb carcass.

Olobo are lungs served in milk.

To cook a festive dish called tash-kordo (stone food), pieces of meat are marinated and baked in the oven on special mounts. Before ovens were used in Kyrgyzstan, the meat was placed in a washed mutton stomach and cooked in a pit with hot stones. 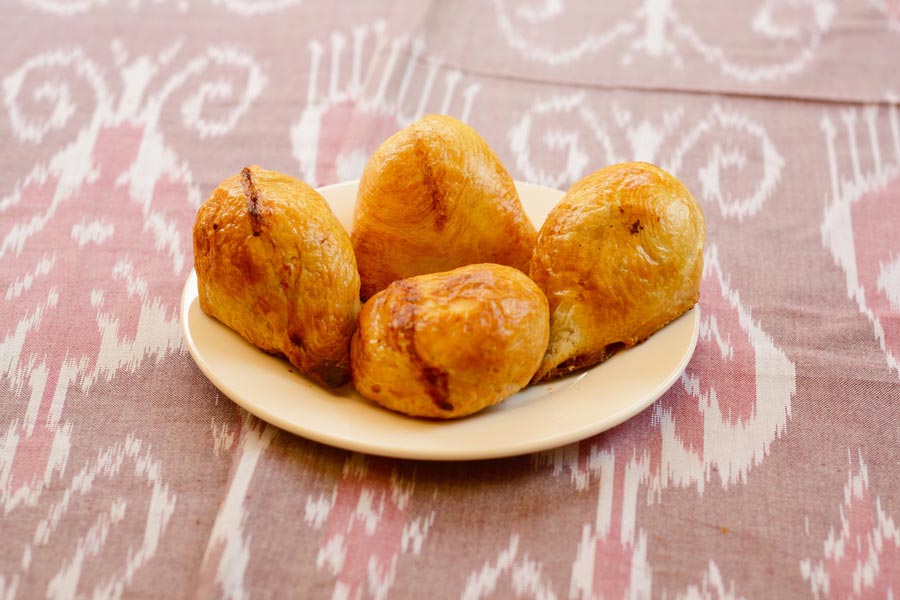 Meat-filled dumplings, noodles and breads are a common theme in Kyrgyz cuisine.

Beshbarmak, a Kyrgyz dish of boiled meat, thin dough and broth, is served at almost every feast.

Oromo is a long, thinly rolled dough which is stuffed with meat or potatoes, rolled up and steamed. It is cut into individual portions before serving.

Samsas are individual meat pies with a flaky crust which are cooked in a tandoor oven. The most delicious samsas are said to be found in Osh, where the samsas are exceptionally round, while in other regions they may be triangular or square.

Manty (manti) is an unleavened dough which is cut into small squares and filled with meat and onions before steaming. Manty can be found in almost any local restaurant, and in some regions of Kyrgyzstan you can also try manty made with yeast dough.

Naryn are very thin noodles mixed with finely cut meat. They can be found throughout the country but must be tried when visiting the town of Naryn!

Hoshany  are doughy minced meat pies which are fried in oil.

Laghman is a popular dish consisting of long noodles and meat fried with vegetables. 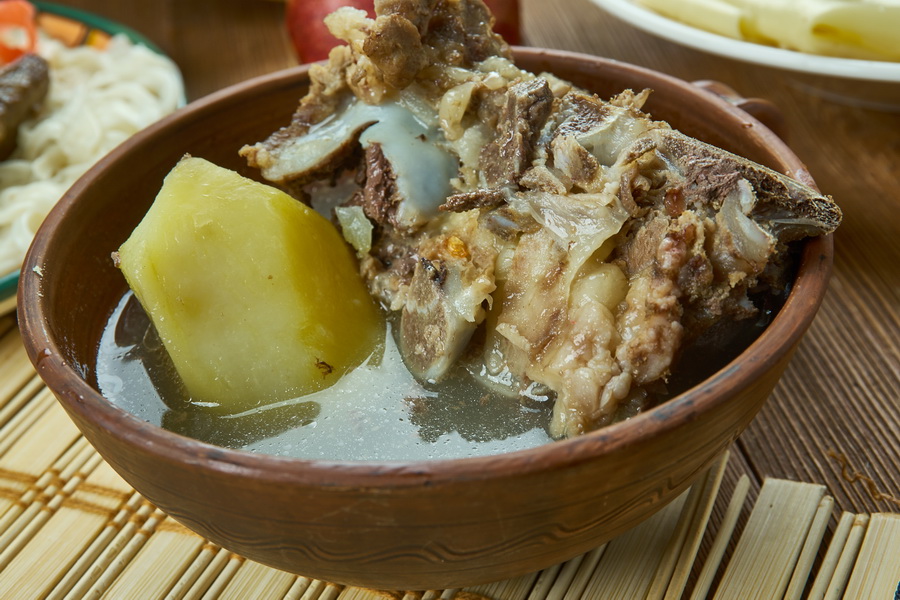 Kyrgyz national cuisine is famous for a cold soup with noodles and vinegar called ashlyam-fu (ashlyan-fu), which is actually borrowed from the Dungan people. Karakol ashlyam-fu, prepared in the Kyrgyz city of Karakol, is considered the best in the CIS countries.

Hot noodle soups include gulchetai (kulchetai, chymchym), made from egg dough and vegetables in a meat broth, and kesme, a noodle soup with meat.

Other soups include gulazyk, consisting of meat and fried, chopped grains, and Kyrgyzstan shorpo, a fatty meat broth. Kyrgyz cuisine is also famous for a milk soup called shurugan. 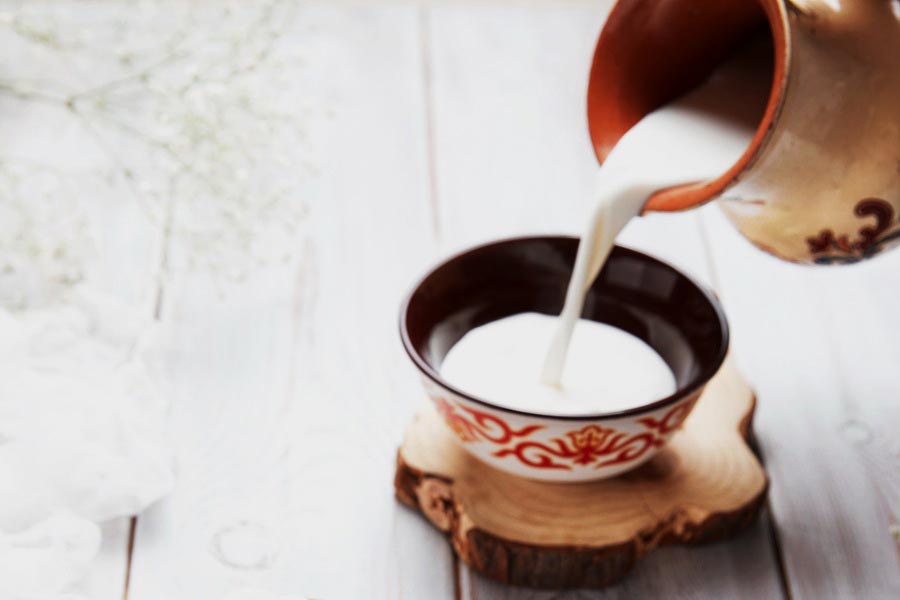 The Kyrgyz people are very fond of milk products. They are commonly eaten for breakfast in Kyrgyzstan,  and the country even exports its dairy products to Russia and neighboring Central Asian countries.

On the Kyrgyz dastarkhan you can see zhuurat, a yogurt made from sheep or occasionally goat milk; a curdled cheese called ezhigey; a ghee known as sary may; a cottage cheese made from boiled milk called byshtak; and fresh cheese called pyshlak.

Also popular among dairy products are kaymak, which is similar to sour cream, and dried sour milk balls called kurut. 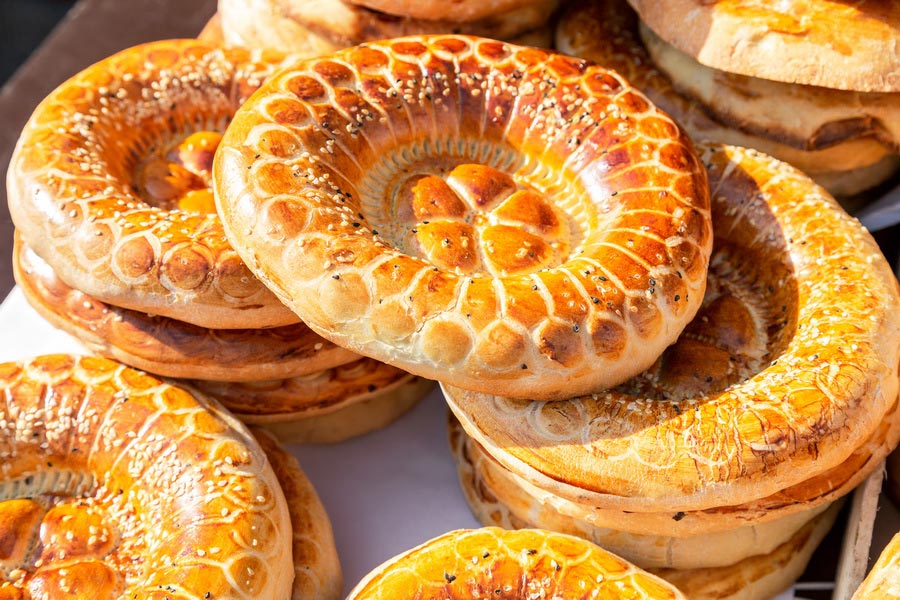 A Kyrgyz meal is always served with bread, for without it the table is considered empty. Kyrgyz cuisine today includes a variety of bakery products:

Naan is a round loaf of white bread  that is cooked in a clay tandoor oven.

Boorsok are pieces of yeast dough fried in oil.

Zhupka is a puff pastry.

Tokoch is a cake made from yeast dough. 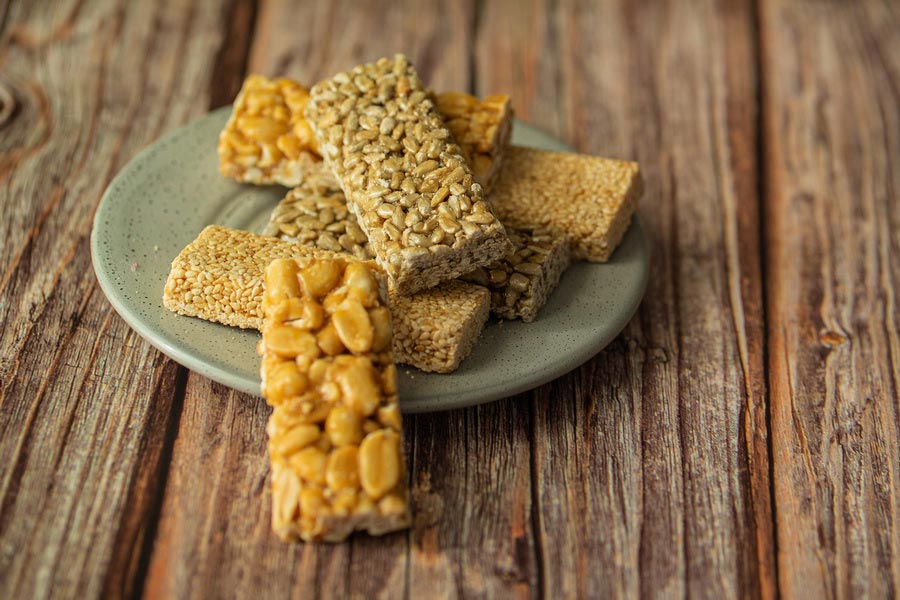 Traditional Kyrgyz sweets are made from nuts, fruit and honey. The most famous Kyrgyz desserts are zhansak and balmaniz. Zhansak is a candylike treat consisting of nuts, honey and ghee. Balmaniz contains walnuts, honey and sometimes sesame seeds.

Umach syut ash is a sweet milk dish in which flour cakes are boiled in milk and seasoned with ghee. 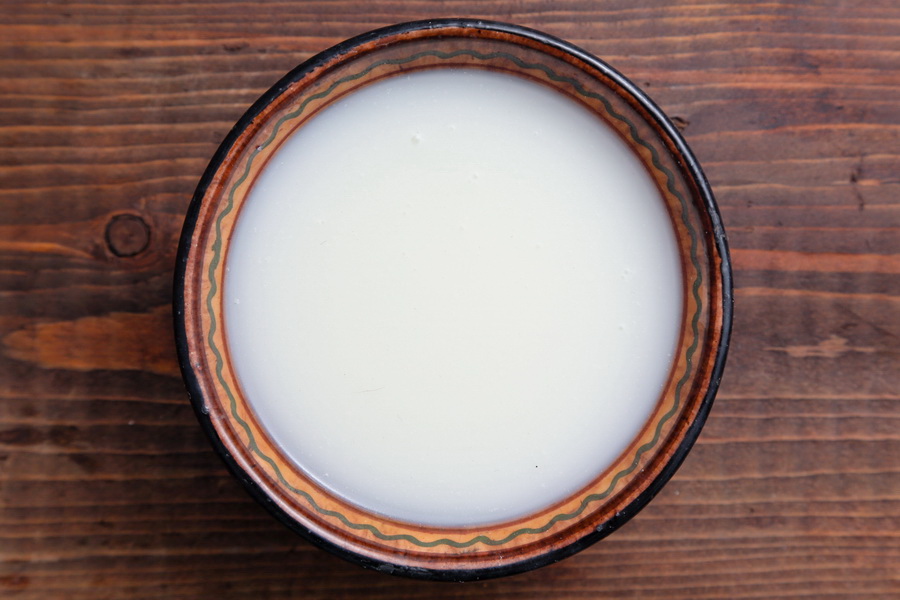 A feast in Kyrgyzstan begins and ends with tea. Green tea is more common in the south and black tea in the north. In Issyk-Kul and Naryn, people prefer tea with thick milk and crystallized sugar.

Other popular drinks include:

Kurrma, a tea mixed with milk, fried flour and salt;

Atkanchay, a tea with salt, sour cream, butter and milk;

Kumys (kymyz), a drink made from fermented mare's milk;

Maksym (also called tan), a drink made from barley, wheat, millet and corn. If you mix maksym and chalap (ayran diluted with water) you get a drink called aralash.

Bozo is made from millet and yeast and is mildly alcoholic.

Dzarma is a drink made from barley which is also mildly alcoholic.

As is clear from the list above, Kyrgyzstan food ranges from salty to sweet, from everyday fare to highly unusual dishes. Be sure to try a variety of meals when visiting Kyrgyzstan to discover your personal favorite!