Birth Customs and Traditions in Kyrgyzstan 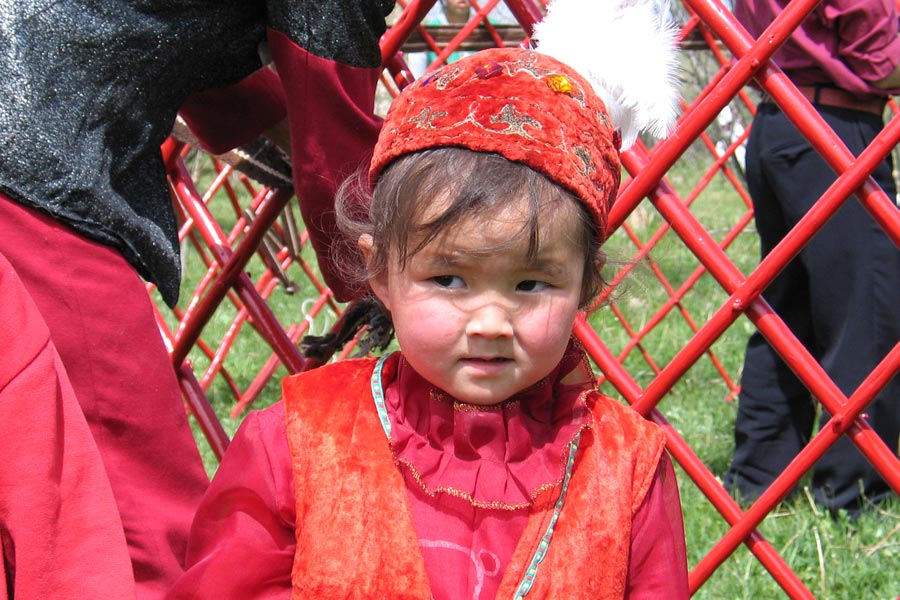 Giving birth was a dangerous and scary process, and even afterwards, it wasn’t always assured that the baby would survive. Many birth traditions in Kyrgyzstan existed to ensure health and long life for the baby, and to protect him from bad spirits and demons. These traditions come from before Islam was the dominant religion, and incorporate many pagan and shamanistic elements.

A midwife, or kindik-ene, would be brought in to help with the delivery. Her job was to make sure that the baby was in a good position to be born, and would cut the umbilical cord after birth. She would also help protect the child against demons and bad spirits by saying certain spells. As a reincarnation of the earth goddess, Umai-ene, the midwife was a protector of mothers and young babies, and was thus honored after the birth with gifts, such as a sheepskin or the best cut of meat.

After the birth, a special Kyrgyz celebration, called a dje-entek toi, is held. Guests are also given melted butter (called sary mal), which is saved especially for this occasion in the stomach of a slaughtered lamb. If a child was born prematurely, he or she would be swaddled in a fox fur, which would be hung from the wooden frame of the yurt. This little hammock was moved from the right side of the door around the yurt in intervals for nine months, nine days, nine hours, and nine minutes, which was considered to be the normal gestational period. Only then would the child be considered to be fully born and a dje-entek toi could be held.

Another ceremony, the beshik toi, would be held the first time that the baby was first wrapped up to be put in a juniper cradle, or beshik. The infant would be swaddled and placed into the cradle by an old woman, with the hopes that the baby would live to be as old as her. After 40 days of seclusion, the baby is brought out into society. When visitors first come to see the baby, they bring a koronduk, or a special gift, usually monetary. The baby is made a special piece of cloth of scraps from 40 neighbors, each scrap representing each day the baby has lived. Scraps are believed to have special magical properties, and thus an item made of scraps was special and beneficial.

When a child first started to walk, a ceremony called tushoo kesuu was held. The baby’s legs would be tied with a black and white rope, symbolizing good and evil. Guests compete in races, and the winner gets to cut the rope from the baby’s legs and help it walk.

Infant mortality was unfortunately high, and there were special traditions for families that lost children. Sometimes a child would be given to foster parents, who would raise it as their own for a certain amount of time. If boys in a family usually died, then a son might be dressed in girl’s clothing and his hair would be braided. After 10 or 12 years, then his hair would be cut. Amulets or verses from the Quran could also be attached to a child’s clothing to keep away evil spirits, or a child might wear bracelets or earrings, since the metal would scare the spirits.

Nowadays, with improved medical services, children are more likely to survive, and many families do not hold all of these ceremonies. Certain ceremonies might still be popular, such as tushoo kesuu, but families might not even have a beshik or midwife.