Funeral Customs and Traditions in Kyrgyzstan 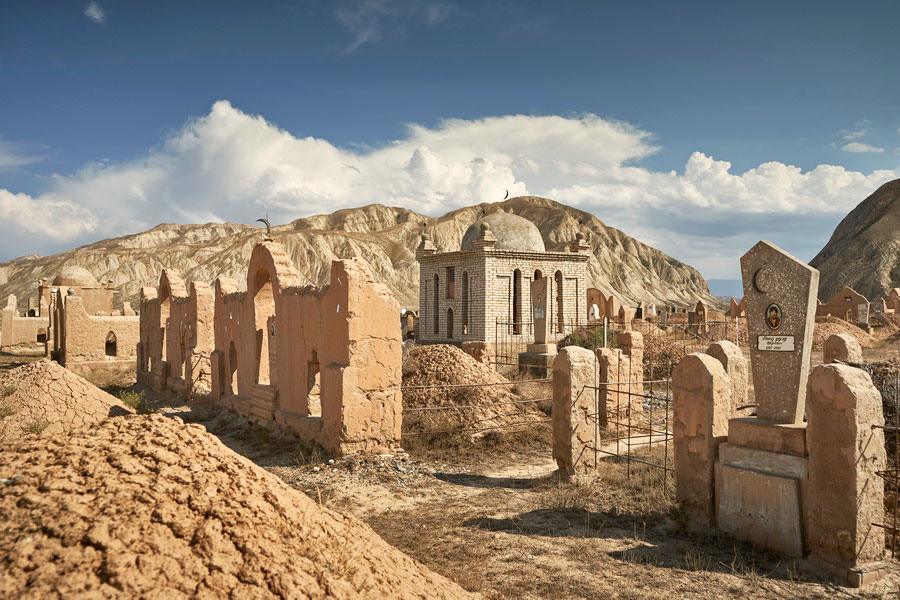 Funerals in Kyrgyz culture often feature a mix of Islamic and pre-Islamic traditions, though the focus is on respect for the dead. When a person lays close to death, a mullah is called, who would recite prayers and help the person attain peace. Once a person had died, then others needed to be notified. Traditionally this would be done with a flag on top of the yurt, with a red flag signifying a young person, a black flag signifying an adult, and a white flag signifying an elderly person. In today’s days, technology (such as telephones) makes such flags obsolete, but conveying the message is still emotionally trying.

The body is placed in a yurt, and visitors come to pay last respects and sing traditional songs. Women cry inside the yurt and sing, while men stay outside. Everyone wears traditional hats. On the third day, the body is washed and wrapped, and laid to rest while the mullah reads prayers. The mirrors in the house are covered during the funeral, and a feast is spread for guests and those who have come for the funeral. The sons or brothers of the deceased would organize to repay his debts. Only men accompany the body to the cemetery, and women stay behind. After a funeral, the guests go straight home, as it is not allowed to visit others straight after a funeral.

If someone dies at the age of 48, for example, his final age will be considered as 49, since the time spent in his mother’s womb is also added. An official mourning period of 40 days is announced, though usually 37 or 39 days are observed (as the number has to be an odd number). After this period, the mourners gather again to kill a cow, and this time only the women cry, but not the men. Dishes are cooked in honor of the person who passed, and have to be eaten fully, so that the soul isn’t hungry.

Most importantly was that a person lived a good life, so the he was prepared for death. People should try to be good, to forgive others, to be respectful, to marry well, and to have lots of children and herds. Throughout life, it was said, the distance between good and evil is about as big as the space between one’s eyebrows, and that both are essential to living. Thus, funeral customs and traditions in Kyrgyzstan were also about respect for life.