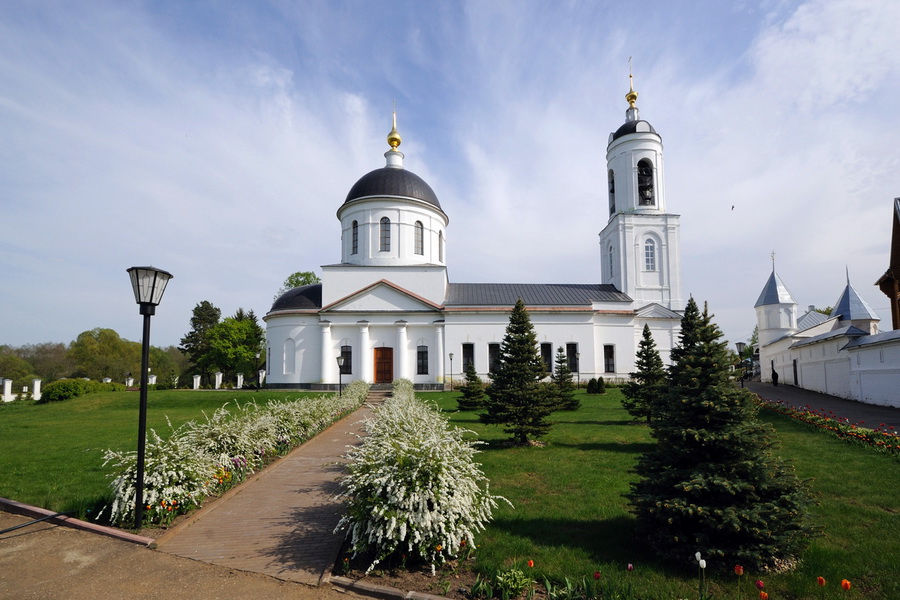 The snow-white monastery, located in the village of Mahra, captivates visitors with its purity and gives a sense of magical tranquility. However, this was not always the case and during its long history the monastery has witnessed many events.

The monastery was founded by the Monk Stephen Mahrishsky in the 14th century. It is known that in the mid-14th century, Stefan left the Kiev-Pechersk Lavra for Moscow. According to sources, Metropolitan Theognostus blessed Stephen for desertification. Prince John Krotky invited him to stay in any of the Moscow monasteries, but Stefan refused and asked permission to find his own quiet and secluded monastery.

After some searches, Stefan stoped in a small forest glade on the lands of the Pereyaslavl-Zalessky principality. He built a simple cell and began to cultivate the land. Gradually, residents of local villages began to come to him for advice. There were those who decided to stay and pray with Stephen in his monastery. Soon a church was built here in honor of the Holy Trinity. The monastery on this site originates precisely from the small wooden Trinity Church built, according to legend by Stephen himself.

The Trinity Church has been rebuilt more than once, but always remained the main temple of the monastery.

The founder of the monastery was buried near the walls of the Trinity Church. For many centuries, people have been talking about miraculous healings taking place on the grave of Stephen Makhrishchi.

The fire that happened in the monastery at the end of the 15th century practically destroyed it.

Varlaam became a hegumen of the monastery in 1557. He began the restoration of the monastery, and also writed the “Life of Stephen” based on the stories of his great-grandfather, contemporary Stephen.

It was decided not to change the burial place of the relics and the monks reburied Stephen at the southern wall of the newly-built side chapel of the Trinity Church. The chapel was consecrated in the name of St. Stefan in the presence of Ivan the Terrible and his wife. The new chapel was not large (about 12 meters in length) and was considered independent.

The construction of the Trinity Church itself lasted about another 10 years.

In 1615, the monastery, plundered by troubled times, was transferred to the Trinity-Sergius Monastery.

A two-story stone church, consecrated in the name of Peter and Paul, was being built over the northern gate.

In the 19th century, a three-tier bell tower and some utility rooms were added to the Trinity Church. In 1900, a parish school was opened in the monastery and a children's shelter was established.

However, already in 1922 the monastery was closed. The bell tower, Trinity and Stefanovsky churches were blown up in 1942. Later, this place will be paved.

Before the restoration began, an orphanage, a hospital, a pioneer camp and storage facilities were in the monastery buildings.

Inhabitants of the Assumption Convent for the first time inhabit the monastery building, near the Church of the Holy Apostles Peter and Paul in 1993.

Over the next years, colossal work was carried out to restore the appearance of the monastery complex: the foundation was excavated and the Stefanovsky church, the church of Sergei Radonezhsky and the main church of the monastery, Troitsky, were rebuilt.

Today, the monastery almost completely contains itself. More than 80 natives live in the monastery. There is an icon-painting and sewing workshop, as well as a cheese factory.

When dedicating to the monastery, be sure to ask the local guide about the cheese and maybe you will even be given a try.