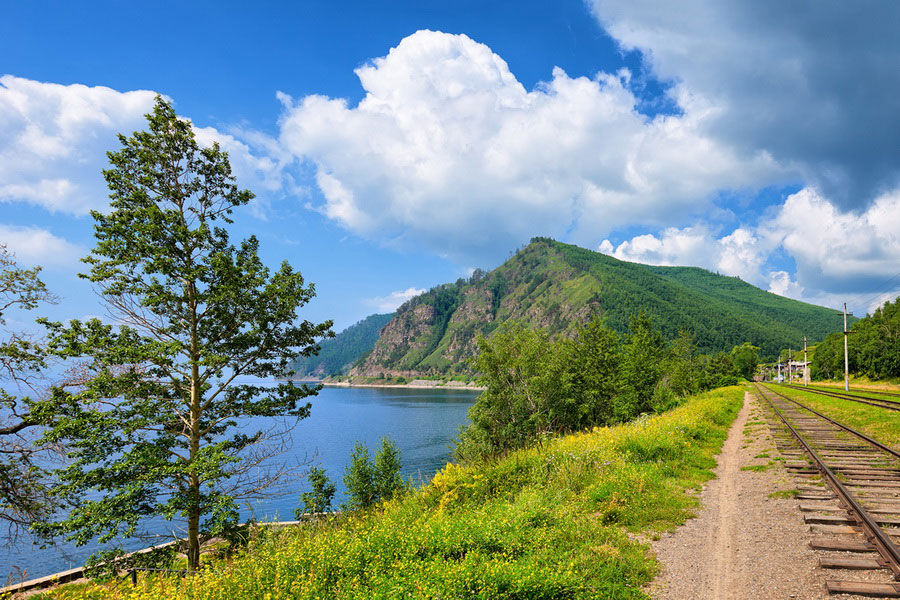 The Circum-Baikal Railway (CBRW) frames the south-western part of the Baikal lakeside. The road with a length slightly less than 100 km starts from Shaman-Stone at the Angara source and ends with the Shaman Cape at Mysovaya station. This unique engineering art monument, erected in the period from 1899 to 1915 by architects from Russia, Italy, Poland, Albania, and Latvia was of significant geostrategic importance both as a section of the Trans-Siberian Railway and as one of the ways to strengthen the power of the Russian Empire in the East.

The Circum-Baikal Railway, as of right, is one of the main and most beautiful man-made sights of the Baikal Lake, rating the sixth in terms of water-table area (31,500 km2). The CBRW also has an epithet “golden buckle” of the Russia’s steel belt, as the most expensive and glorious railway project implemented in tsarist days. Running along the lakeside edge, most beautiful bridges, stone tunnels, viaducts along the retaining-reveting walls and river valleys, this project, once being an ambitious one, remarkably fits in a general attractive landscape indented with rocks and cliffs. This one of the most picturesque places of the planet is a Mecca for tourists, scientists, artists and fans of active tourism. The CBRW features a first-rate scheduled sightseeing electric multiple-unit train with business and economy class seats. Whereas, those, who like driving “smoke” in the hair, may be using services of retro-train “Baikal Cruise”. In summertime they can hire a craft and enjoy the views of Baikal nature along the coastline. Crystal clear and clean water of the Baikal contains so little mineral salts (96.7 mg/l), that some stones and various objects can be seen at the depth of 40m.

Those, who love extreme tourism, will find a lot of possibilities for active rest: diving, rock-climbing, mountain skis, mountain bike, extreme aquatics and so on. Well, fans of romanticism will catch fancy in the wash, incredible landscapes and an amazing bottomless, like the Baikal itself, starry arch, which enhances the feeling of greatness of this unique nature over the futility of human existence.

Along the whole route of the Circum-Baikal Railway there are many remarkable sights. One of them is Olkhon Island, the heart of the Baikal. According to Buryat legends and myths it is a dwelling place of dreadful Baikal spirits and a spiritual center of the Northern goetic world. Olkhon is the largest island of the Baikal. The island includes 43 archeological objects.

One of the favorite tourist resting-places along the CBRW is the Pad Polovinnaya River. The amazingly beautiful valley lies between Chaikin Rock and Polovinny Cape with two tunnels - the longest and shortest ones, laid through them.

Another one of the most beautiful places at the Circum-Baikal is the “Italian” Retaining Wall. It received this name in honor of the amazingly beautiful arches resembling the Italian architecture. This engineering structure was developed by an immigrant from Italy by name Ferrari.

The “Shabartuy Complex of Artificial Structures” consists of a steel bridge with a span in between 40-m high stone supports and a double-span vaulted concrete viaduct.

The capes of Malaya Krutaya Guba and Bolshaya Krutaya Guba are glorious stone tunnels, which, owing to their massive structures, protect the spacious river valley and the picturesque bay with its beaches from severe Baikal winds. This entire splendor is separated in twain by two majestic viaducts crossing it.

At present the CBRW has 40 tunnels, 16 stone and 3 concrete galleries, four stations and a passing siding. The length of the longest tunnel, running through the Polovinny Cape, comes to 777.5 m. The total tunnel length makes up about 9.5 km. About 470 various bridges and 6 viaducts were built over the springs, rivers, ravines and bays of the lake. To strengthen the rails, almost 270 different stabilizing structures were erected: sustaining walls supporting steep slopes and magnificent rocks. Along the Circum-Baikal Railway per every100m, there is an engineering structure, beautiful in its own way.

One must admit that it is necessary to see all this architectural and landscape splendor with one’s own eyes, to feel the whole strength and, at the same time, the vulnerability of these wildlife sites, which preserved their virgin beauty. And today, the Baikal as never before needs in solicitous attitude on the part of those who it presents its splendor and natural power to.