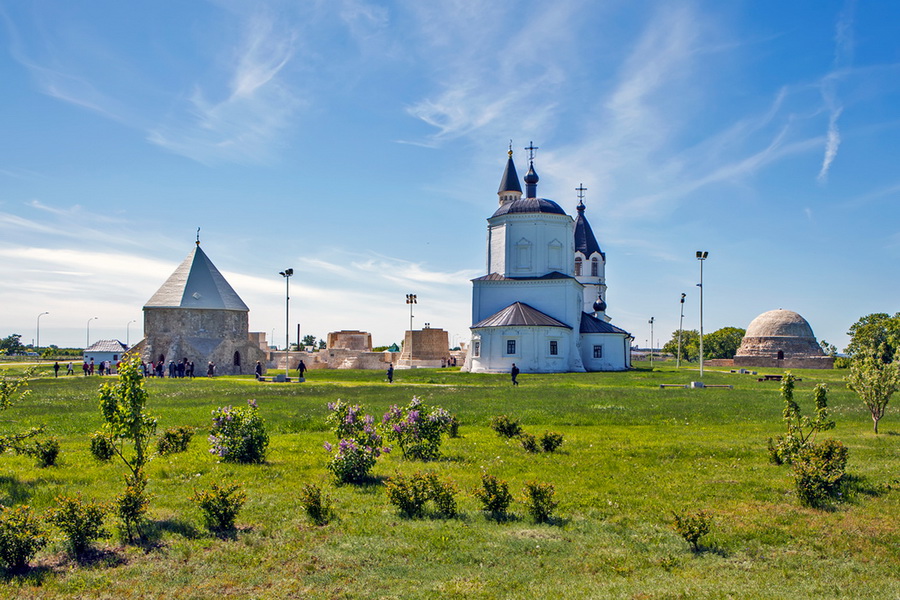 Bolgar Historical and Archaeological Complex is a truly unique museum-reserve, for it is the only example of Bolgar-Tatar architecture from the 8th-14th centuries. A popular tourist attraction, it stands as a testament to the existence of the once-powerful states of Volga Bulgaria and the Golden Horde.

Located 200 kilometers from the Tatarstan capital of Kazan in western Russia, the complex is situated on 380 hectares of land between the city of Bolgar and the village of Privolzhskoye. The area which the museum-reserve now occupies was inhabited during the Neolithic, Bronze and Early Iron Ages. In later times, one of the most prominent cities in all of Volga Bulgaria was founded here, while the Aga Bazaar that was staged on the territory became the most important trading platform between ancient Russia and the Far East.

After being conquered by the Golden Horde, Volga Bulgaria formed the Northern State of Jochi, the son of Genghis Khan. The city of Bolgar was rebuilt from stone, and it is primarily these buildings which have survived to our day.

The fertile land of Bolgar in the Middle Volga was once inhabited by Turkic-speaking nomads whose tribes were primarily engaged in agriculture and animal husbandry. Fishing and hunting were natural occupations amid the labyrinth of rivers replete with fish and the forests full of wildlife. The handicrafts of these early nomads brought them renown the world over, and at that time the highest grades of leather even came to be known as “Bulgarian”. During the reign of Khan Almysh in 922, the inhabitants of Bolgar converted to Islam.

Rapid development of trade along the Volga River was ushered in when Sviatoslav Grand Prince of Kiev defeated the Khazar Khaganate, to whom the Bolgars (Bolghars) had been subordinate. Bolgar’s infrastructure began to develop at a highly advanced rate for the Middle Ages: water supply and sewage systems were installed and durable buildings of brick and stone were built. In the mid- 8th century, the first Golden Horde coins were minted in the city, and under the Uzbek Khanate (1312-1341), Islam was made the state religion and Bolgar the Islamic capital of the entire Volga Region.

By this time, Bolgar had developed into an advanced settlement replete with minarets, mosques, bathhouses and elaborate homes. Its impressive defensive structures included ramparts, ravines, wooden walls and gates along its southern, eastern and western fronts. Just outside the city walls were a Russian village and an Armenian settlement.

Prosperity and tranquility did not last long, however, for at the close of the 14th century Bolgar was razed to the ground by Tamerlane. While still reeling from this catastrophe, in 1431 the city was defeated by Fyodor Pestry, a subordinate of Russian Prince Vasily the Blind. The town was unable to recover from this blow, and with the liberation of the Bolgars in Russia from the Tatar-Mongols, the southern territories fell into the possession of Moscow. The northern Volga Region remained under the historic Kazan Khanate, however, and its people came to be referred to as Tatars.

When Peter I visited the city ruins in 1722, he ordered the historical area be preserved. In the early 18th century, an Orthodox church and later a monastery were built on the site and the village of Uspenskoye formed around it. This village was renamed Bolgary in the early 20th century.

In 1864, Russian archaeologist Vladimir Gustavovich Tizengausen first excavated the settlement, and in the coming decades ongoing digs led to the discovery of numerous buildings and artifacts. The abandoned settlement became an invaluable source of Tatar history, a rare preservation of the once-mighty civilizations of Volga Bulgaria and the Golden Horde. In time, the area also evolved into a pilgrimage site equivalent to a small Hajj for local Muslims.

Bolgar Historical and Archaeological Complex was founded in 1969, by which time a sizable collection of relics from the Golden Horde era had already been amassed. Today, the rich history of the complex attracts tourists and pilgrims from around the world.

A small town with an area of 7 hectares adjoined to Bolgar’s southern wall is presumed to have either been the khan's summer residence or a caravanserai for travelers along the Great Silk Road. Historians have determined where the town’s entrance gate was located and uncovered remains resembling a minaret and a room for ablutions.

Bolgar Historical and Archaeological Complex is comprised of a diverse collection of buildings:

Cathedral Mosque is the only surviving structure from the early Golden Horde period. Originally used for religious ceremonies and as an emergency shelter during enemy attacks, it is now a holy site for Muslims. Its large minaret was built directly into the mosque wall before collapsing in 1841, most likely due to a cavern formed underneath by adventurous treasure hunters. The minaret was restored based on sketches made in 1827 and now offers visitors amazing views of the complex.

Northern Mausoleum is a 14th-century grave situated opposite the central entrance of Cathedral Mosque. During excavations, it became a storage area for tombstones discovered on the grounds. The stones’ unusual inscriptions consist of the name of the deceased, their social status, date of death and Quranic quotes.

Church of the Assumption was built as a monastery in the 1730s, but in 1763 the site was closed and the monks transferred to the town of Cheboksary. The stone complex was first called Uspensky before being renamed village of the Bolgars. When the minaret of Cathedral Mosque collapsed, a sizable crack also appeared on the church belfry, which in 1862 was dismantled and rebuilt. Decades of neglect during the Soviet era left the complex in a dilapidated state. The bell tower and church were later restored and now house the Museum of Russian Culture, whose collections tell the local history of Christianity.

Eastern Mausoleum is a gem of Bolgar architecture. Repurposed as St. Nicholas Church when Church of the Assumption opened in the 18th century, in 1994 its dome was again mounted with an Islamic crescent.

Museum of Bread outlines the development of agriculture in the city. It invites visitors back in time through recreated village buildings and a miller's estate, where fresh bread is still baked and sold to tourists.

Small Minaret is the only monument of medieval Bolgar that remains almost completely intact. Holy Bolgars were reportedly buried here, and although a memorial mosque is said to have once stood nearby, no trace of it remains. In the 1970s, the minaret was restored according to its original form.

Khan's Tomb is an early 14th-century mausoleum in which eight Muslim graves were discovered, bringing the total number of tombs unearthed at the complex to more than thirty. Ten Islamic saints and several Bolgar khans are interred here, and if legend is true one of the holy men who introduced Islam to the land was also buried on site.

White Chamber once served as a public bath and is striking for its advanced heating and sewage systems.

Black Chamber, whose name is derived from its fire-blackened appearance, could have served as a madrasah, a court chamber or as a small Sufi dwelling called a khanaka. Legends of a “fireproof princess” surround Black Chamber. According to the story, the khan and his family took refuge in this chamber during the capture and massacre of the Bolgars by Tamerlane. The invaders set fire to the building from all sides, leaving no chance for escape. After the flames were extinguished, Tamerlane noticed a beautiful woman in a snow-white robe sitting unharmed amid the ashes and immediately fell in love with her. The legend has different endings: according to one, Princess Gaisha settled with her brothers in Kazan, where they lived happily ever after. According to another version, she rejected the villain and paid with her life, while in a third variant she saves her brothers, marries Tamerlane and moves with him to Samarkand. The purported burial place of the princess can be seen near the village of Tatar Aisha.

Eastern Chamber, also called Khan's Bath, is one of the oldest buildings at the museum reserve. Built between the mid-13th to early 14th centuries, it was used as a public bathhouse before collapsing in the middle of the 14th century. Yet its foundation was spared, and in recent times the original design of Khan’s Bath, which bears strong resemblance to White Chamber, was professionally restored.

Museum of Bolgar Civilization has more than 1,600 exhibits on Bolgar’s medieval period. Located in River Station building, the exhibits cover 2000 square meters and are enhanced by recreated buildings, colorful maps and multimedia equipment. For those who wish to delve more deeply into the displays, guides are available to accompany you on your tour.

Museum of Islam, better known as Koran Museum, opened in 2011. Its building is an octahedron crowned with a dome and a crescent, giving it the appearance of an ancient Bolgar mosque. Inside, visitors can learn about Islam and the most pivotal religious events to occur in the area. A historic memorial sign which reads “Erected in honor of the adoption of Islam by the Volga Bolgars in 922” is also on display. Yet the main draw of Museum of Islam is a display of the largest printed Koran in the world, made by special order in Italy and listed in the Guinness Book of Records. Measuring 2x1.5 meters and weighing an astonishing 800 kilograms, its cover is made of malachite cloth and flecked with stones, while the pages are made of Scottish paper threaded with silk and silver. Its patterned design is plated with gold and the binding made of calfskin. A source of pride for Muslims, the Koran can be viewed in the museum’s central hall.

White Mosque (Ak Mosque) is one of the most recognizable sites in all of Tatarstan. Added in 2012, it is regarded as the local Taj Mahal and serves as the main mosque of Bolgar. Comprised of three domes and two minarets, it was built to resemble a typical Middle Eastern mosque. In the center is a large granite-lined courtyard with a reservoir and cascading waterfall, on the surface of which the mosque is beautifully reflected. The square serves as a symbol of the paradise garden of Chahar Bah and is divided by streams into four quadrants surrounded by eighty-eight white marble columns symbolic of the historic columns of Bolgar Cathedral Mosque. Not surprisingly, this courtyard has become a popular photo spot. The mosque’s majestic white stone walls bear classic ornamentation and a crescent moon, while the prayer hall covers an area of 180 square meters and is noted for its diffused lighting which gives the site an air of mystery.

Bolgar Historical and Archaeological Complex is a one-of-a-kind site, a worthwhile stopover for visitors to Tatarstan who wish to dig into the region’s multi-layered history.