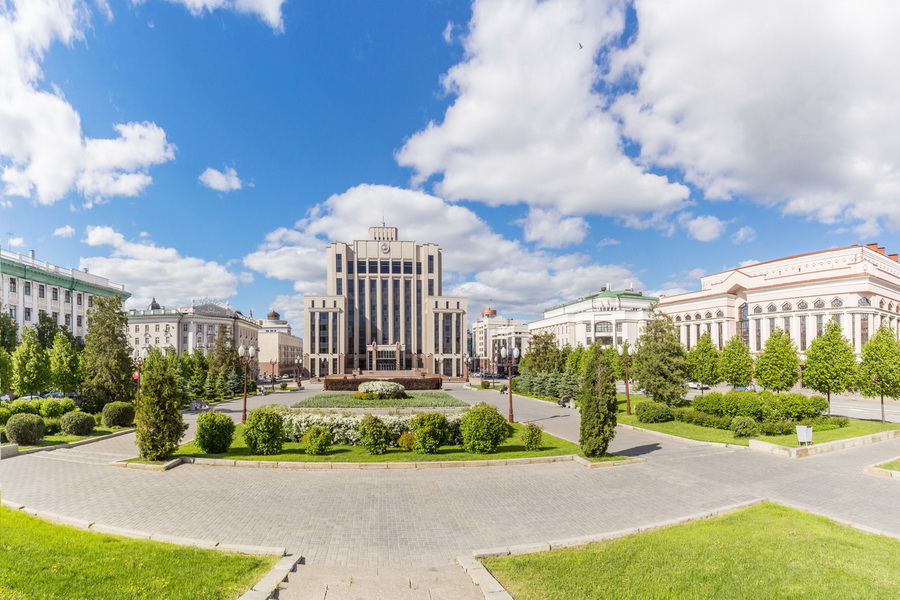 Freedom Square in Kazan, Russia is home to some of the city’s most recognizable landmarks. Occupying some 50,000 square meters in the historic Vakhitovsky District, the plaza has played a central role in Kazan for over two centuries.

The area was first called Theater Square in honor of the city’s main playhouse, which stood on the plaza from the early 19th century until it was destroyed in a fire in 1924, at which time the square acquired its current name. Many city parades and political rallies were held here in Soviet times, and today the plaza still hosts numerous festivals, holidays and other city events. Even on quiet days, the architectural monuments and cultural institutions which line Freedom Square never fail to evoke the interest and admiration of visitors.

Kazan City Hall, built on site of the former Noble Assembly, has a neo-Renaissance architectural style which is rather unusual for the city.

After a fire in 1842 devastated the city, officials decided not to restore the charred Noble Assembly but to build another structure in its stead. Attention was paid to the smallest detail in the lavish new building, which includes a chairman’s office, a spacious library, drawing and club rooms, a pantry, dining hall and a large ballroom designed to accommodate up to eight hundred people. This ballroom became the seat of Kazan’s social life in the early 20th century: In 1909, opera singer Feodor Chaliapin and composers Sergei Rachmaninoff and Alexander Scriabin performed here before admiring audiences, while poetry readings held around this time helped to propel Vladimir Mayakovsky, Vasily Kamensky and David Burliuk to fame.

Kazan is one of the main cultural centers in Russia, and the Musa Jalil Tatar Academic State Opera and Ballet Theater on Freedom Square takes center stage in this role. The current theater was built in the mid-20th century using a harmonious combination of classicism architecture and elegant national décor, while the local troupe which performs on its stage has been active since 1791.

Kazan’s theater group was formed at the end of the 18th century in a local gymnasium. Their first official playhouse was made of wood and burned down in a fire in 1841, and although construction of a new brick theater was delayed for a decade, the troupe continued to perform in the homes of the local elite.

The premiere performance of the opera Ivan Susanin in August 1874 proved to be a turning point for the Tatar Academic State Theater, which experienced increased fame and success from that point forward. The theater building burned down twice more, once in 1874 and again in 1919. This final loss interrupted the activity of the theater for twenty years, and it was only in 1939 that performances were reinstated, albeit not on the troupe’s own stage.

Construction on the new building began in 1936 and was completed in 1956 . It was named after Musa Jalil, a hero of the Soviet Union who was in charge of the theater’s literary activities from 1939-41 before he left to fight in World War II. Performances in the new theater premiered with the Tatar opera Altynchech. In 1988, the term “Academic” was officially added to the theater name.

Renovations completed in 2005 helped to improve the building’s acoustics and lighting, allowing for even more engaging stage designs and innovative productions. Today, Tatar Academic State Opera and Ballet Theater in Kazan is one of the largest musical theaters in Russia, whose technical equipment is on par with that of the Mariinsky and Bolshoi Theaters. Its repertoire is rich and varied, ranging from classic to contemporary, and its stage welcomes opera singers and ballet performers from around the world. Each year Tatar Academic State Opera and Ballet Theater also hosts the Feodor Chaliapin International Festival and Rudolf Nureyev International Festival of Classical Ballet.

Not far from Freedom Square is the main musical university of Tatarstan, the N.G. Zhiganov Kazan State Conservatory. The institute was founded by the brilliant Tatar composer Nazib Gayazovich Zhiganov, a key figure in the development of Tatarstan’s musical arts who also served as the school’s first director.

Nazib Gayazovich Zhiganov moved to Kazan from Kazakhstan in 1928, where he completed his studies at a musical college before transferring to Moscow. Zhiganov shone on the stage of the Tatar State Philharmonic and in a grand performance of the opera Kachkyn at the Tatar Opera and Ballet Theater. In 1944, Zhiganov established Kazan State Conservatory in the 1912 House of the Nobility building and proceeded to serve as its director for more than 40 years. The school accepted its first group of 50 students in 1945, and since then has trained nearly seven thousand specialists.

After the institute was granted permission to run its own publishing house in 1990, it proceeded to print an array of scientific works, educational materials and music collections. In 1997, an opera studio opened at the Conservatory.

Kazan State Conservatory currently employs more than 200 professors, doctors and associates and has 625 students enrolled in 20 different departments. Additionally, a secondary music school, also named after Nazib Zhiganov, has now been opened at the conservatory.

Government Building of the Republic of Tatarstan

Underneath the modern Government Building of the Republic of Tatarstan is an unusual story linked to Soviet power. Construction on the original building began in the 1950s with the aim of creating a moderate-sized Stalin high-rise for the regional Communist Party committee. Yet the project was unexpectedly halted after Nikita Khrushchev visited Kazan and became enraged that such a pompous building was intended for the local committee. The leader proceeded to severely reprimand Tatarstan’s Communist Party activists for squandering national resources on such a project. As a result of this setback, the building’s design was altered and its construction was completed only in 1962. In accordance with Khrushchev’s demands, the finished product had a drab, concise appearance and was half the size of the original.

During the Brezhnev Era, the local nobility achieved architectural revenge by constructing a second high-rise for the local Communist Party committee. Overlaid in gray-and-white marble, it stood behind its plain-looking predecessor to create a two-stage appearance that visually expanded the appearance of Freedom Square. Together the two buildings formed a unified ensemble which served as the Tatarstan Regional Committee of the Communist Party for some years.

This architectural composition, once a glaring example of the Era of Stagnation, was destroyed during local government-led reconstruction in the early 2000s. The new Government Building of the Republic of Tatarstan on Freedom Square is now the seat of the Ministries of Finance, Culture, Tourism, Energy, Justice and Transport.