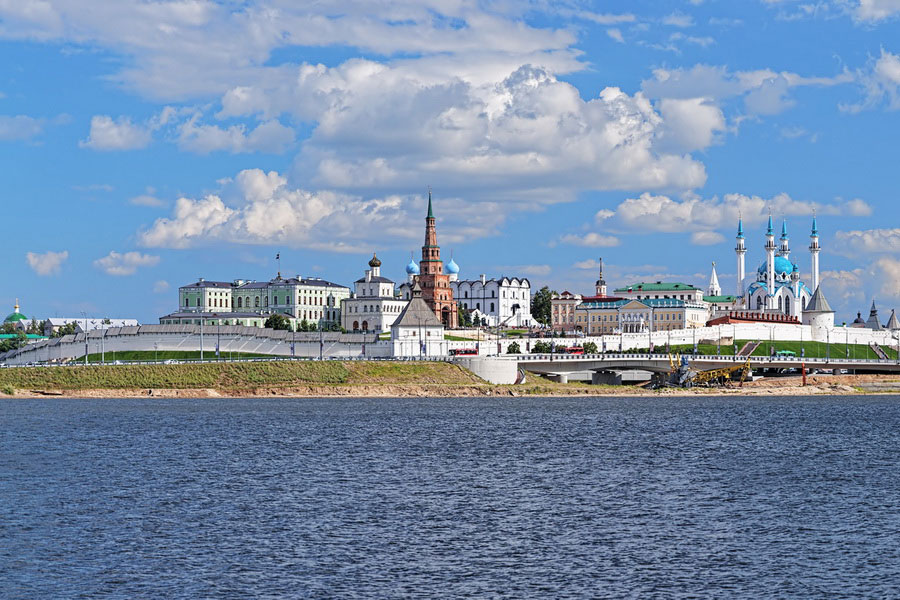 Kazan Kremlin is the soul of Kazan, Russia and its main historical monument. The fortress is a treasure trove of history and an unusual complex where mosques and churches coexist to create a truly unique touristic site.

Behind its ancient and majestic walls is a masterpiece of urban planning, the history of which began in the 10th century when the Bulgars built a fortress on the hill where the Kremlin now stands. Kazan Kremlin would later fall under the onslaught of the Golden Horde, folowed by the troops of Ivan the Terrible, yet despite all the turmoil it remained the main fortification of the Volga Region for centuries.

The diverse houses of worship at Kazan Kremlin are unusual not only in Russia but around the world, for it is not often that you can hear the fusion of chiming cathedral bells and the Islamic call to prayer.

In ancient times, Kremlin Hill was surrounded on threee sides by water, formidable forests and fearsome swamps, which convinced the ancient Bulgars that it was the perfect place to build their fortress at the end of the 10th century. The fortress walls were wooden, and in keeping with Eastern tradition of the time, it was called an ark.

By the time the Mongols invaded in the 12th century, the ark had been rebuilt with stone, yet even this was not sufficient to ward off the ruthless invaders, and the region was absorbed into the Mongol Empire. The fortress on Kremlin Hill was declared the residence of the new city rulers, and the region once known as Bulgar Principality was renamed Kazan Ulus.

Kazan gradually turned into a large craft and trade center and managed to retain its status as capital even after the collapse of the Golden Horde. The Kazan khans expanded the city, and by the turn of the 16th century the fortress had exptended far beyond its original borders. Inside the walls of the new citadel were the Khan's Palace, a Kremlin mosque and mausoleums.

During the Kazan Khanate, the city flourished and grew. Then as now, Kazan’s population consisted of a conglomerate of cultures and nationalities who lived peacefully side by side. In the 16th century the fortress was captured for Russia by Ivan the Terrible, whose assault on the city proved devastating. After his victory, the Tsar sent architects from Pskov to rebuild the citadel. Consequently, the names of these architects have been immortalized in a monument located near Annunciation Cathedral in Kazan Kremlin. It was at this time that the Kremlin began to develop into the complex which can still be seen today.

Ivan the Terrible’s new outpost in the Volga Region was the white-stone Kremlin, which was fortified with thirteen new towers connected by a wall. In the 18th century, the fortress began to lose its defensive function as the borders of the Russian Empire expanded significantly. Kazan became the center of Kazan Province in 1708, which required the construction of new administrative buildings in the Kremlin.

The walls of Kazan Kremlin were repeatedly shelled, including in 1774 when a rebel by the name of Emelyan Pugachev fired at it with canyons while trying to overtake the city. However, the walls remained intact, and Pugachev was arrested and kept inside those very walls until his execution.

The 19th century saw new and significant structures added to Kazan Kremlin. In 1848 the Governor’s Palace, Junker School and Consistory Palace were constructed, and it is assumed that one of its most famous towers, Suyumbike, was also built in the 19th century.

Unfortately, Kazan Kremlin's architectural heritage has not been fully preserved. The Bolsheviks destroyed the bell towers of some of its cathedrals and a significant number of relics were lost during that same period. The Kremlin became the center of the Tatar Autonomous Socialist Republic in 1920, and during World War II the city served as an evacuation center. As there were not enough residential buildings, people were settled in administrative buildings and museums inside Kazan Kremlin.

The fortress buildings remained in poor condition until the end of the 20th century. In 1994, the Kazan Kremlin Museum-Reserve was created, and large-scale reconstruction efforts commenced which continue to this day.

Since 2000, Kazan Kremlin has been included in the UNESCO World Heritage List. The residence of the President of Tatarstan is now also located within the walls of the Kremlin.

Kazan Kremlin contains many famous museums: The Museum of Islamic Culture, Natural History of Tatarstan and Museum of Cannon Yard, as well as a small museum at Annunciation Cathedral, the Manege Exhibition Hall and a branch of the State Hermitage Museum.

Where: Kazan Kremlin is on the banks of the Volga and Kazanka Rivers in Kazan, capital of Russia’s Tatarstan Republic.

When: Although open daily, each of the museums of Kazan Kremlin operate on a separate schedule.

The gates of Spasskaya Tower remain open around the clock. A second entrance at Taynitskaya Tower is open from 8 am to 6 pm (October - May) and from 8 am to 10 pm (May - October).

Kul Sharif Mosque and Annunciation Cathedral can be visited daily from 9 am to 7 pm.

All of the Kazan Kremlin museums are closed on Mondays, open from 10 am to 6 pm Monday-Thursday and Saturday-Sunday, and on Friday from 11 am to 8 pm. Ticket offices close half an hour earlier.