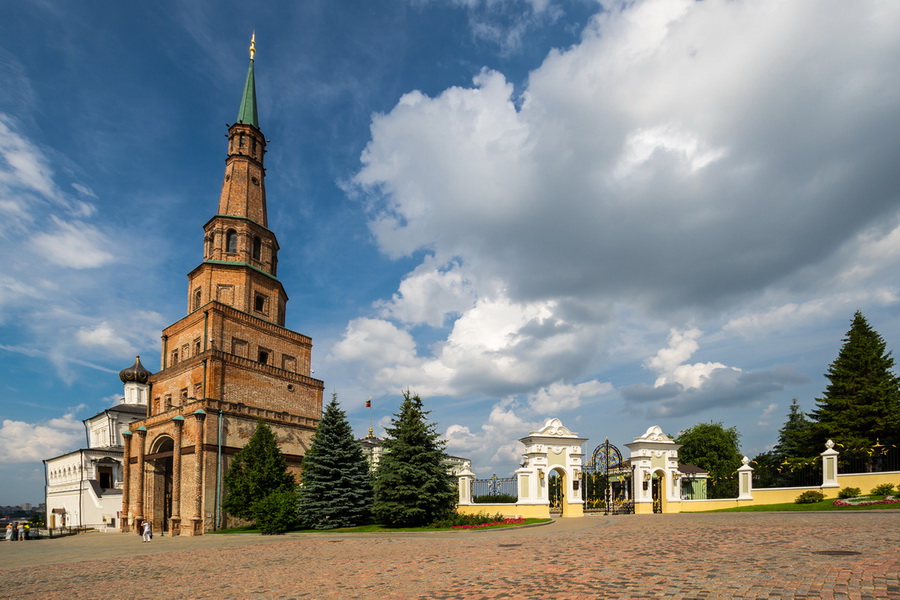 Suyumbike or Söyembikä Tower in Kazan, Russia is among the most famous sights of the city. Considered the pearl of the Kazan Kremlin, the tower remains shrouded in legend, with ongoing debate regarding its original purpose and the cause of its famous slope.

Unfortunately, all the сhronicles which referenced the construction of Suyumbike Tower have been lost in various fires, and the image of the tower is missing in the first handwritten accounts of Kazan. According to one theory, Suyumbike Tower is a 16th-century minaret built as a monument of Tatar medieval architecture. Others claim that it was built in the 18th century as the main entrance to the house of the commander of the Kazan Kremlin.

The first mention of a tower called Suyumbike appears in the magazine "Zavolzhsky Ant" in the early 19th century. Since then, various romantic stories centered around the tower have been published in local magazines and newspapers from time to time. The most popular of these stories claims that the tower derived its name from the beautiful Queen Suyumbike, who showed great devotion to her husband and city, then capital of the Kazan Khanate. After the death of the king during the capture of Kazan by Tsar Ivan the Terrible, the tsar wished to take Suyumbike as his wife. The queen agreed on the condition that the tsar build a high tower from which she could admire her city one last time. When the tower was completed seven weeks later, Suyumbike climbed to the top and proceeded to throw herself down in an act of loyalty to her family and beloved city.

Historians treat this legend as a fairy tale since the tower was clearly built much later than the death of Ivan the Terrible in 1584. However, the exact date of its construction remains unknown. Most experts believe that Suyumbike of Kazan was built in the late 17th - early 18th centuries, for it reflects the Moscow Baroque style popular at that time. It was likely created as an internal line of defense from which the entire Kremlin and the surrounding area were clearly visible.

During archaeological excavations conducted in the early 20th century, it was discovered that Suymbike Tower’s famous tilt is due to the fact that part of its foundation rests on architectural remains dating to the period of the khans. As a result, the top of the tower is off kilter by almost 2 meters. Although the slope is visible to the naked eye, the tower has been reinforced and does not pose a threat.

The tower is 58 meters high and built in five tiers of baked brick, with its pinnacle crowned with a spire and crescent. The beautiful carved gates of the tower are called "Day” and “Night" and are decorated with zodiac signs.

During World War II, measurements and sketches of the tower were made so that in the event of its destruction it could be more easily recreated. Fortunately, these drawings were not needed, as Suyumbike Tower in Kazan emerged from the war unscathed.