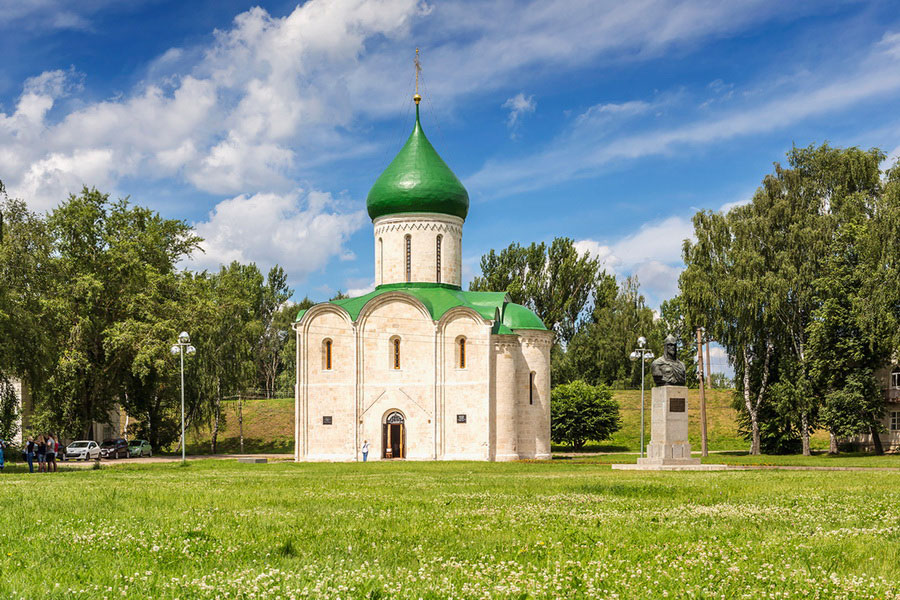 The main temple of the city and its most ancient building is the Transfiguration Cathedral. It was built in 1157: founded by Yuri Dolgoruky and completed in the time of Andrew Bogolyubsky. Once, it stood in the Kremlin in the center of the fortress.

Outwardly, the temple looks very simple - as if carved from a single piece of white stone. The center of the cubic base is decorated with the bright green dome.

The white-stone ornamental band on the top part of the drum and the arcature band running along the arch semicircles are the only decorations. Unfortunately, the interior of the church has not survived. But some fragments of paintings, icons, and church utensils can be found in Moscow's largest museums. Of luxurious interiors remind the majolica floor, which is kept in the Goretsky monastery of Pereslavl, and the main temple icon of the Transfiguration, which is now in the Tretyakov Gallery in Moscow.

The Transfiguration Cathedral saw many great events and famous people. It was there that St. Sergius of Radonezh was ordained. Buried in the cathedral are the son and the grandson of Alexander Nevsky. On the square before the temple you will see the monument to the great commander. In 1374 Sergius Radonezhsky baptized the son of Prince Dmitry Donskoy there. In 1612 the militia of Minin and Pozharsky prayed for the victory there.

The square near the Transfiguration Cathedral in 1585 was chosen as the site of the church of St. Peter the Metropolitan.