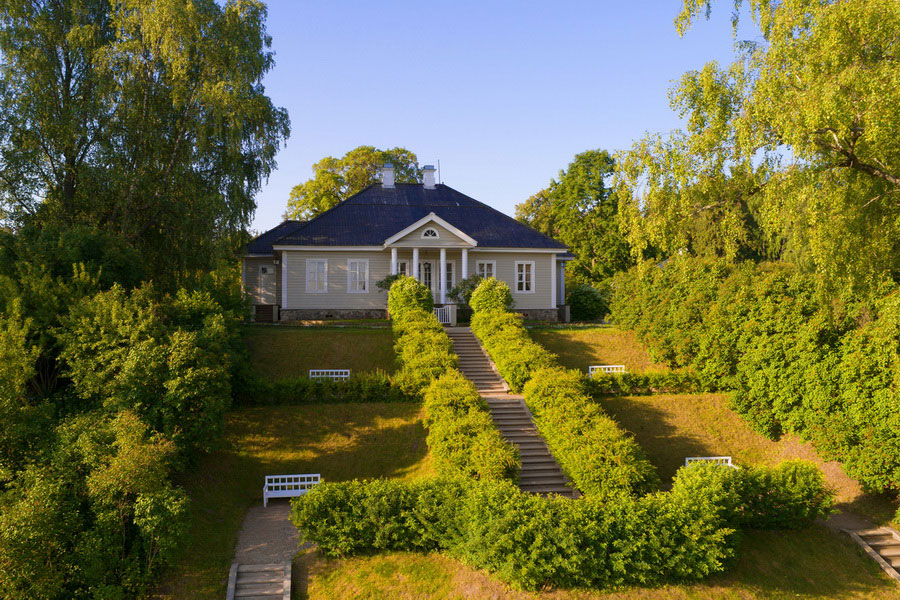 Mikhaylovskoye Museum Reserve is the family estate of renowned poet Alexander Pushkin at which the novel "Eugene Onegin" and other famous works were penned. The complex is situated in Pushkinogorsk District of Pskov Region on an area of ​​over 9700 hectares. Established as a museum in 1922, the complex invites guests to come and get better acquainted with the life and work of one of the world’s greatest poets.

The land on which the Pushkin reserve is located was donated by Empress Elizabeth to Pushkin's great-grandfather, Abram Petrovich Hannibal, in 1742. (Incidentally, Hannibal was also Peter the Great’s son). When Abram’s son Osip Abramovich inherited the land in 1781, he renamed the village of Ustye to Mikhailovskoe and proceeded to build a house adjoined by a gorgeous park. The estate later passed into the possession of Osip’s daughter, the mother of Pushkin.

When the young Pushkin visited the estate for the first time in 1817, he was extremely impressed by "rural life, Russian baths, strawberries, etc." He stayed in the village a second time in 1819 and again from 1824-1826 while in exile for his “atheistic teachings against religion”. Pushkin’s first autumn in Mikhaylovskoye was a very fruitful one despite frequent quarrels with his father, and he passed his time reading books, thinking and working continuously. The poet was a frequent visitor to the neighboring Trigorskoye Estate, where the mistress afforded him access to her father’s library.

While in Mikhaylovskoye, Pushkin met Anna Kern, his neighbor’s niece who inspired him to write a poem dedicated to her. The now-famous poem written from Pushkin to Kern begins "I remember a wonderful moment ...". On another trip in 1827, he began writing the novel “The Moor of Peter the Great”. Through the years, Pushkin periodically came to Mikhaylovskoye to take a break from city life, and during his stays he composed nearly one hundred works in total, including the classic work “Eugene Onegin”.

Pushkin’s final visit to the estate in 1836 was prompted by the death of his mother. With her passing, the Mikhaylovskoye estate passed into the hands of the poet, and after his death in a duel just a year later, it was inherited by his descendants. On the poet's centenary in 1899, the land was purchased from Pushkin’s relatives by the state.

In the early 20th century, the estate was damaged in two separate fires, only to be restored in 1921 and transformed into a museum the following year. During the Second World War, most of the buildings of the museum-reserve were damaged, including Holy Assumption Monastery near Mikhaylovskoye at which Pushkin was interred. In 1949, both the estate and the monastery were revived, yet only in 2013 was Mikhaylovskoye Museum Reserve declared a cultural heritage site of federal significance.

Today, the doors of the Mikhaylovskoye museum complex remain open to tourists. When visiting, Pushkin House Museum is a great place to begin your tour and get acquainted with this unique place. The museum includes exhibits outlining the history of the estate, magnificent embroidery of servant girls and, in the room of the nanny Arina Rodionovna, letters which were sent by her to the poet. Also in the Nanny's House is a perfect recreation of its 19th-century interior, although ironically the most significant exhibit in the room is her casket.

The Parents’ Room is decorated with family portraits and some original letters which Pushkin wrote during his years of exile. Pushkin's Study contains memorabilia items such as his desk and furniture, while in the Kitchen Exhibit are dishes and cooking utensils common in 18th and early 19th-century homes. The kitchen is divided between the master's eating area and the cook’s living quarters.

The estate museum includes other supplemental buildings and is known to host festivals and special exhibitions on paintings, household items and the like.

Mikhaylovskoye Park is a beautiful representation of 18th - 19th century park architecture. The grounds include several memorial walkways, including Spruce Alley which was planted by Pushkin's great-grandfather, Osip Abramovich Hannibal, and a lime tree dedicated to Anna Petrovna Kern.

Mikhaylovskoye Museum Reserve near Pskov provides a personal and unusual glimpse into the life of Alexander Pushkin and is an essential stop for tourists with an appreciation for historic literature.