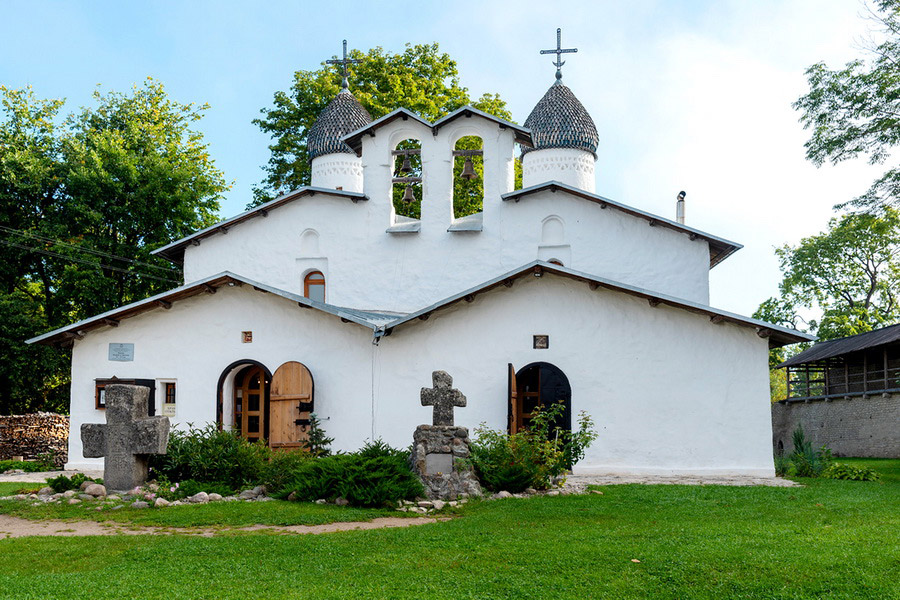 At Pokrovsky Complex in Pskov, Russia, ancient architecture which has born witness to the most pivotal events in the city’s history conjures up a bygone era. Included in the ensemble are Church of the Intercession and Nativity of the Most Holy Mother of God, Pokrovskaya Tower and the walls of Roundabout City, each of which holds a unique key to Pskov’s past.

More than just a historic cathedral, Church of Intercession and Nativity of the Most Holy Mother of God at Pokrovsky Complex stands as a monument to the valiant acts of Pskov residents against historic invaders. "From the Breach" is the term locals always add to the name of the church in memory of their ancestors who defended the city from the troops of the Polish King Stefan Batory in 1581.

During the epic battle, the enemy dealt a powerful blow to the city wall, creating a breach near the Pokrovskaya and Svinuzskaya Towers. They proceeded to capture both towers and even hoisted the banner of the Polish king above Pskov. At this critical moment, relics of the esteemed Prince Vsevolod-Gabriel were brought to the battle site from the 14th-century Pokrovsky Church in order to provide support for the Russian army.

In the nick of time, Pskov’s defenders halted the enemy’s further advance by creating a barrier with mounds of rubble from the wall. In order to wrest Svinuzskaya Tower from the control of Batory’s forces, Pskov fighters destroyed it with shots from a giant cannon. Meanwhile, the surviving troops of Batory who were hiding in Pokrovskaya Tower were forced to surrender. His army strewn with causalities, Batory retreated in defeat, leaving Pskov in a state of jubilant victory. A year later, Church of the Nativity of the Most Holy Mother of God from the Breach was added to Intercession Church in memory of this event.

Legend claims that before the attack, an old blacksmith from Pokrovsky Monastery was visited in a dream by an icon of Mary, who instructed him on how to defend the city. The icon laid out plans for defensive structures and revealed the layout of the enemy camp before encircling the walls of Pskov three times and blessing its defenders. This revered icon was on display at the church until it was stolen by German forces in the 20th century. Once regarded as lost, the German authorities amazingly returned the treasured relic to the Russian Orthodox Church, and today the revered image occupies a place of honor at Trinity Cathedral in Pskov.

Near the church at Pokrovsky Complex are two historic stone crosses, one each of which stands to the north and south of the building. The southern one marks the place where Mary purportedly appeared to the elderly blacksmith and is also the burial site of some of the city’s intercessors.

Standing on the bank of Velikaya River, Pokrovskaya Tower of Pokrovsky Complex’s Roundabout City resembles an old, vigilant warrior who remains in fearful watch for the enemy. Although the days of sieges and attacks have long passed, the "gray guard" has survived in all of its stately majesty. It is the most significant structure of the Pokrovsky ensemble and the pride of the city.

In 1470, shortly after the first wooden walls of Roundabout City were erected, the first stone turret– Pokrovskaya Tower- was built. A century later, this tower proved to be vital in the defense of Pskov against the troops of Stefan Batory.

Standing 50 meters high with a circumference of 90 meters, the 5-tiered Pokrovskaya Tower is considered one of the largest turrets in all Europe. Its walls are 6 meters thick at the base and 3.5 meters at the top. The lowest tier was built directly into the rock, under which were special "hearings" where guards could listen for the sound of the approaching enemy. During one historic attack, the enemy dug 9 separate tunnels during their siege of the city, but trained acoustic warriors quickly detected and eliminated them one by one, thus preventing the invaders from reaching the city wall.

The top of Pokrovsky Tower was once shaded with a wooden canopy, and although its middle section was restored in 1950 based on historic drawings, it all burned down in a devastating fire just five years later. In 2011, a new awning was added and a weathervane installed where the watchman once sat keeping guard. The courtyard has also been renovated and its secret underground passages partially excavated. In front of the tower are Peter's Bastions, which were built during the Great Northern War (1700-1721) when Pskov again served as a fortress city.

Pokrovsky Complex in Pskov is one of the many unique sites awaiting discovery in this historic Russian town.