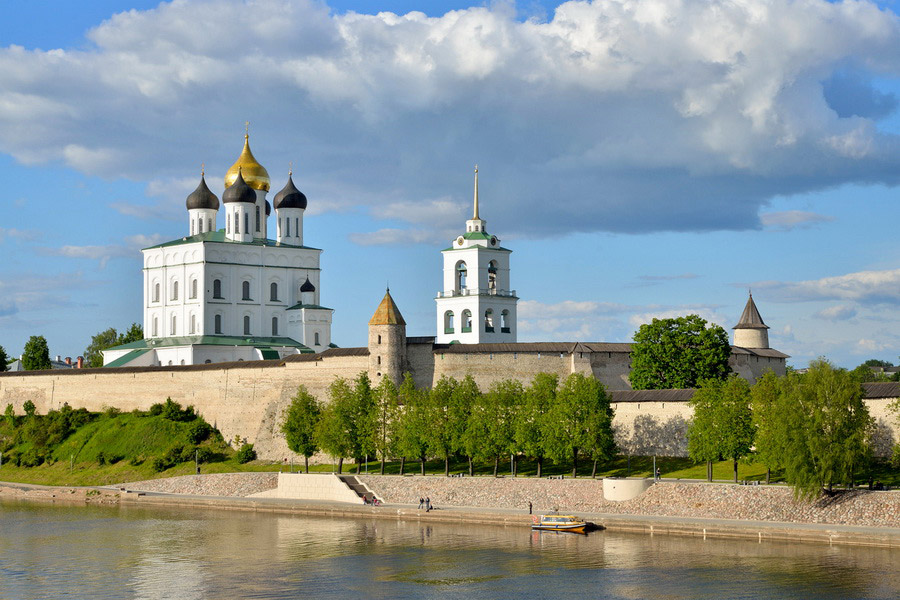 The Trinity Cathedral is located in the Krom territory and is the main shrine of Pskov, its heart and symbol. It is the cathedral, which can be seen from all parts of the city, where all the Pskov roads from all over the city converge. The Legend of Princess Olga who ordered to build the “House of the Holy Trinity” in a confluence of three solar rays, which she saw from the opposite Velikaya river bank, claims that the Trinity Cathedral is older than the Krom. However, the archaeological data does not confirm this beautiful story: after all, the construction of the Krom was started even earlier, before the baptism of Rus. The Trinity Cathedral was rebuilt more than once. The church, existing today, is the third incarnation of the “House of the Holy Trinity”, built in 1699 by Peter I, who shortly thereafter became world-known as Peter the Great. This five-domed church was much larger and higher than its predecessors.

The Cathedral is famous for its seven-tiered iconostasis, whose height is 42 meters. It is decorated with gilded carvings depicting trees and fruits of the Garden of Eden. Surprising is the fact that the total area of icons inside the Trinity Cathedral exceeds the area of the temple itdelf. The especially revered icons of the Holy Trinity Cathedral are the image of Virgin Chirskaya, “The Trinity with the Acts” (the XVII century), and also Pskov Intercession Icon of the Mother of God, missed during World War II and returned to the temple only recently. There are also relics of three Pskov saints: Prince Vsevolod-Gabriel, Prince Dovmont- Timothy and Blessed Nicholas Salos (Shaker).